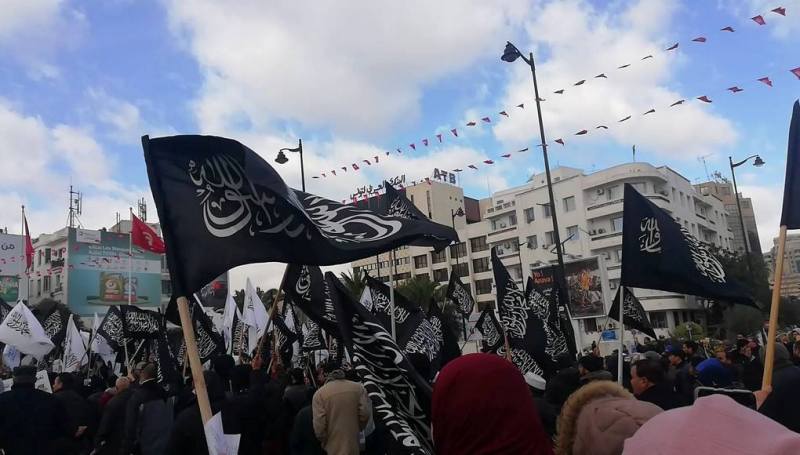 On Monday, 3/6/2019, two security men from Bu Hijla center in the governorate of Kairouan have arrested two members of Hizb ut Tahrir, they are Badr Ad-Din As-Sifsafi and Mu’iz Al-Falih because they refused to take down the sign with the congratulatory message from Hizb ut Tahrir to the Muslim Ummah on the occasion of the blessed Eid ul-Fitr. The two security men removed the sign by force even though it was put in the allocated place after permission was given by the local council!

The two men were taken to the center, where they were subjected to security harassment and insults with the threat of beating and insulting of Allah (swt) in the month of Ramadan in a flagrant challenge to the rituals of Islam. A case was also filed against them, and they were released on condition to return on Friday 7/6/ 2019 to stand before the state prosecutor to decide on their case.

The unjust approach exercised by the Authority in Tunisia in its war against Hizb ut Tahrir’s political activities based on Islam and on every Islamic effort attests to the weakness and fear of this authority to the level of hallucinations from any Islamic political activity. Even the congratulatory message of Eid has become a crime that deserves arrest and trial!!

And we wonder, would the security men dare to bring down a sign by the French, British or American ambassador, for example?

It is surprising that this authority and its security services have not yet realized that the party and its members will not give up work to establish the second Khilafah Rashida (Righteous Caliphate) on the method of Prophethood, no matter how much security harassment and political arrests they face, because it is the obligation of our Lord and the glad-tidings of our Prophet ﷺ.

And on this occasion we turn to the security forces and say to them, this authority will not benefit you when you stand before the Lord of the Worlds, and what will benefit you only is standing on the side of your Deen and your Ummah.

Allah (swt) says: وَيَوْمَ يَعَضُّ الظَّالِمُ عَلَى يَدَيْهِ يَقُولُ يَا لَيْتَنِي اتَّخَذْتُ مَعَ الرَّسُولِ سَبِيلاً * يَا وَيْلَتَى لَيْتَنِي لَمْ أَتَّخِذْ فُلَاناً خَلِيلاً * لَقَدْ أَضَلَّنِي عَنِ الذِّكْرِ بَعْدَ إِذْ جَاءنِي وَكَانَ الشَّيْطَانُ لِلْإِنسَانِ خَذُولاً “And the Day the wrongdoer will bite on his hands [in regret] he will say, “Oh, I wish I had taken with the Messenger a way * Oh, woe to me! I wish I had not taken that one as a friend * He led me away from the remembrance after it had come to me. And ever is Satan, to man, a deserter.” [Al-Furqan: 27-29]