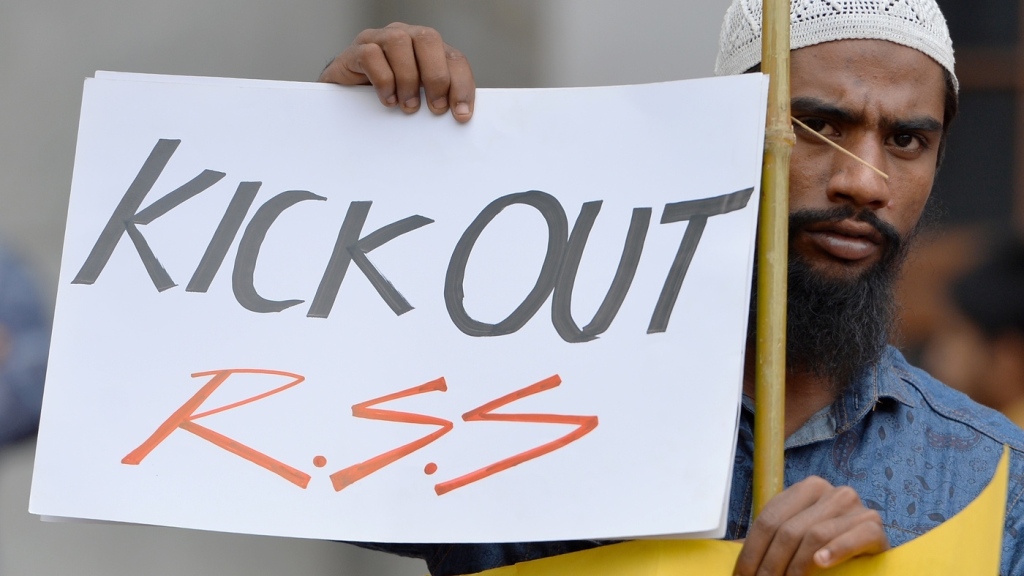 The chief of the Hindu-Nationalist organization RSS said in a speech that the 130 crore people of India are Hindus irrespective of their religion or culture [1]. This definition is a historical definition of the word “Hindu” that identifies anyone residing in India as a Hindu. This statement is at a time of widespread protests contesting the controversial Citizenship Amendment Act (CAA) passed by the parliament on 6th December, 2019. The protesters against CAA, both Muslims and Non-Muslims, demand the revocation of the Bill claiming that the Bill is against the Secular and Democratic fabric of the country. Also during the protests by Muslim organizations, there have been repeated reminders of the participation of Muslims in the freedom struggle of India against the British aiming to prove the loyalty and patriotism of Muslims to the Indian nation.

Using the word “Hindu” to refer Muslims is not allowed because the meaning of the word has evolved and now it means a follower of Hinduism.

The above was revealed to address the mischievous Jews who used the word Ra’ina which had other contemporary negative connotations and meanings, so Allah(swt) commanded the believers to use the word “Unthurna” which is unambiguous. So we must always identify as Muslims as Allah (swt) says: هُوَ سَمَّاكُمُ الْمُسْلِمِينَ “He has named you Muslims…” [22:78]

So, adhering to the command of Allah (swt), Muslims must not twist the Deen of Allah by using such words to convey Halal meanings even when they have clear Haram connotations in the usage of the people. So it is not allowed for a Muslim to identify himself using the word “Hindu”.

The word “Secularism” refers to the separation of religion from the political affairs. This clearly contradicts the nature of Islam which was revealed as a complete and comprehensive way of life, and not just a set of rituals and rules of Akhlaq (Character). Islam is a comprehensive system comprising of a political system, economic system, social system, foreign policy and a penal code.

Secularism allows only a part of Islam to be followed that is related to worship and few individual obligations.

Allah (swt) says: أَفَتُؤْمِنُونَ بِبَعْضِ الْكِتَابِ وَتَكْفُرُونَ بِبَعْضٍ فَمَا جَزَاءُ مَن يَفْعَلُ ذَٰلِكَ مِنكُمْ إِلَّا خِزْيٌ فِي الْحَيَاةِ الدُّنْيَا وَيَوْمَ الْقِيَامَةِ يُرَدُّونَ إِلَىٰ أَشَدِّ الْعَذَابِ “So do you believe in part of the Scripture and disbelieve in part? Then what is the recompense for those who do that among you except disgrace in worldly life; and on the Day of Resurrection they will be sent back to the severest of punishment.” [2:85]

Also the word “Nationalism” cannot be just used to refer to the natural love one has for his homeland. But it also refers to the pride of belonging to a nation which is absolutely haram.

Rasulullah ﷺ said: «لَيَنْتَهِيَنَّ أَقْوَامٌ يَفْتَخِرُونَ بِآبَائِهِمُ الَّذِينَ مَاتُوا إِنَّمَا هُمْ فَحْمُ جَهَنَّمَ أَوْ لَيَكُونَنَّ أَهْوَنَ عَلَى اللَّهِ مِنَ الْجُعَلِ الَّذِي يُدَهْدِهُ الْخِرَاءَ» “People should give up their pride in nations because this is a coal from the coals of hell-fire. If they do not give this up Allah will consider them lower than a lowly worm which pushes itself through khur (faeces).” [Abu Dawod, Tirmidhi]

We should reject these words and concepts and should not try to Islamicise Kufr concepts. Rather we should give our allegiance purely to Islam and its concepts without any adulteration or corruption.