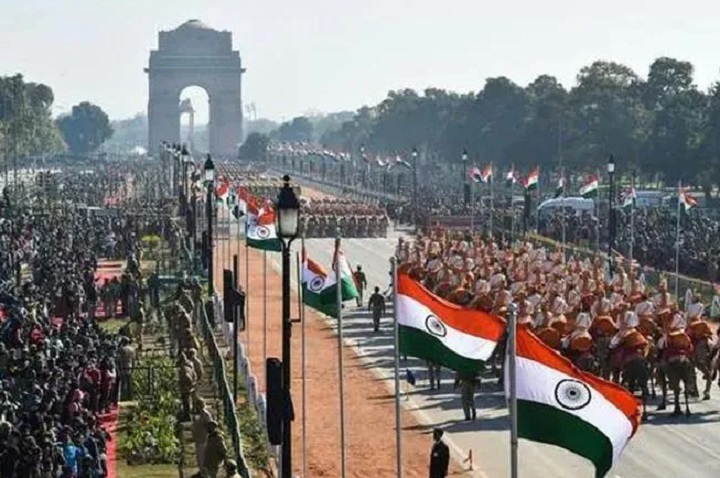 India Celebrated its 73rd Republic Day on 26 January 2022. The celebrations this year are special as India is in the 75th year of Independence – being celebrated as ‘Azadi ka Amrit Mahotsav’. Republic Day marks the date on which the Constitution of India came into effect on 26 January 1950. It replaced the Government of India Act (1935) as the governing document of India. [currentaffairs.com / 26th January 2022]

India became independent on the 15th of August, 1947. Even after independence, the country did not have a sound constitution. The laws, before the enactment of the constitution, were running on the basis of Government of India Act 1935. Having realized the need for a permanent constitution and its own governing body, the government of India appointed a Drafting Committee on 28th of August 1947 to draft it and Dr. B. R. Ambedkar as the Chairman of the Drafting Committee. After almost 3 years, the 308 members of the Assembly, after many consultations and a few modifications finally signed a constitution on the 24th of January 1950, which came into effect on 26th of January 1950. And, that day, is being celebrated as Republic Day in India ever since then.

When we witness the results of India’s so-called independence under “Jawaharial Nehru”, people oppression, especially Muslims, under successive ruling of Indian democracy continued. Hundreds and thousands of the Muslims were killed in Kashmir and other places and continue to be killed until today. Thousands of Muslim sisters were raped, masajids destroyed, and the lives of Muslims converted to hell. And the recent events of Triple Talaq, Lynching, Babri Masjid, attacks on Azaan and Burqa, NRC-CAA are the series of attacks against Islam and Muslims in India since Independence. It is aimed at subjugating the Muslims; restraining us from embracing our true identity and purpose that the Creator has defined for us, and restricting us to existential issues like safety of life and property.

Moreover, the capitalist system and the existing leadership in India have failed in solving the problems of the people. More than 40% of its own population lives in poverty and over 70% of them live below 2 dollars a day. Over half of India does not receive electricity and those who do receive it have power failures most of the time. Forty per cent of children suffer from malnutrition and starvation, not to forget that due to economic injustice and oppression tribal militants were allowed to take over about 40% of India.

In this reality of the people in India, It is sad that Muslims in India, including scholars, in their madrasas are celebrating the so-called independence and republic day and falsely portraying the history of our pious predecessors as they fought and struggled for the Indian nationalistic Independence. It is must for every Muslims to know the true history so that we preserve our identity and also present to the people in India the meaning of true liberation and present to them how Islam, as an alternative ideology, solved people’s problems in the past and will do in the future In sha Allah.

Muslims should know that the Hind had been one of the Wilayat of the Khilafah from the time of the Delhi Sultanate 1205 – 1526 CE and till the end of the Mughal rule from 1526 – 1857 CE. Muslims ruled Hind for well over a thousand years. The situation of the Ummah including the non-Muslims was prosperous to the extent that even today people in Hind say that during the Islamic rule, Hind was like a Golden Bird. In 1857 when the British had completely occupied Hind, Muslims, although small in number, formed the frontier of Opposition. The names of Haider Ali and Tipu Sultan are still remembered with respect and honour as these governors (wula) stood against the British and fought valiantly. Even after the British occupied Hind, the Muslims of Hind remained loyal to the Khaleefah in Istanbul and many of them continued to do Jihad against the colonialists like Syed Ahmad Shaheed and others. During the First World War, mosques in Hind rang with fervent prayers whose Khutba would invoke the benediction of Allah for the well-being of the Sultan and the success of his armies in their effort to destroy the forces of Kufr.

Sheikh ul-Hind Maulana Mahmoud ul-Hasan who at that time was the head of the famous Darul Uloom Deoband worked hard to protect the khilafah from its destruction. He travelled to Hijaz to meet the governor of the Khaleefah in Makkah Mukarrama where he was arrested at the hands of the traitor Shareef Hussain on the 23 Safar 1335 AH. Shareef Hussain wanted the Sheikh to reject the Uthmani Khilafah which the Sheikh and those with him rejected. The Sheikh was handed over to the British who imprisoned him in Malta where he remained in the prison for over three years. When he was released, he returned to Hind to become part of the famous Khilafat Movement also known as ‘Tahreeke Khilafat’. This Khilafah movement was supported by many influential figures of the time to the extent that even non-Muslims lent their hand to it. The Ulemah were on the forefront of this struggle and thus bore the brunt of the struggle to the maximum. The famous among these scholars are Maulana Mahmoud ul-Hasan, Maulana Mohammad Ali Johar, Maulana Shaukat Ali and Maulana Abul Kalam Azad. Even today the Khilafat Movement is part of the secular education system in Hind although ironically Muslims are given the understanding that it was a nationalistic freedom struggle.

It is really sad that current Muslims are being taught that our predecessors struggled for nationalistic Indian independence. The words of one of the pioneers of the Khilafat movements tell us the real cause of their struggle; they were not Indian Independence but they were to remove the occupation from an Islamic land and to protect the Khilafah. Maulana Abul Kalam Azad was one of the speakers of Khilafah conference who published a book in 1920 called Masla-e-Khilafat (The Issue of Khilafah), he stated: “Without the Khilafah, the existence of Islam is not possible. The Muslims of Hind with all their effort and power need to work for this”. Maulana Mohammad Ali Johar also stated: “The ruler of Turkey was the Khaleefah or successor of the Prophet and Amir-u-Mu’mineen or chief of the believers and the Khilafah is as essentially our religious concern as the Quran or the Sunnah of the Prophet.” [My Life a Fragment, Mohammed Ali Johar, pg.41].

Even after the destruction of the Khilafah, the people of Hind continued their struggle to reestablish the Khilafah, so in the 1940s, Maulana Abul Ala Maududi stood up with a call to re-establish the Islamic State. Thus, Muslims in India must give up the inferior feeling emanating out of ‘the minority tag’ assigned to them after the so-called Indian independence of 1947. Under this tag, Muslims have come to live in an inferiority complex and an unnecessary fear psychosis. They must give up this inferior feeling of being tagged as minority and they must proudly define their identity as Muslims alone and realize their position as leaders of humankind – leaders who lead towards the path lit by the Light from the Creator of humankind and all that exists. They should never forget that the greatest contribution that even today’s India stands for was from the Muslims who ruled this land by Islam for over 10 centuries and implemented the just system of Islam over its population.

“Alif, Lām, Rā.1 [This is] a Book which We have revealed to you, [O Muḥammad], that you might bring mankind out of darknesses into the light by permission of their Lord – to the path of the Exalted in Might, the Praiseworthy” [Surah Ibrahim, 14:1]