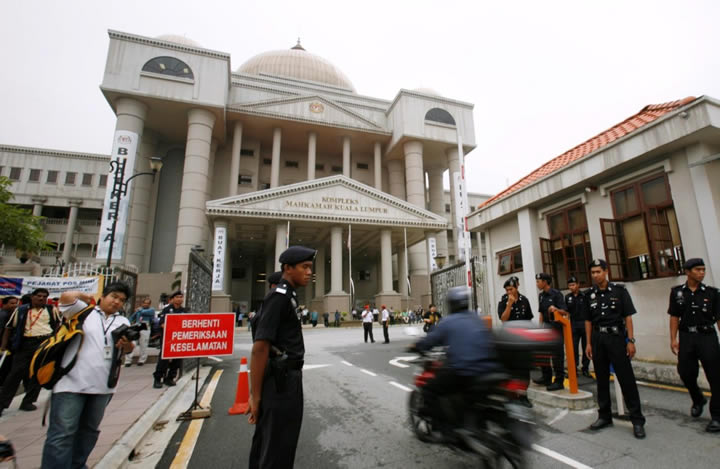 A legal action initiated by a Jill Ireland, a Christian woman of Melanau descent in 2008 came to an end today when the Malaysian High Court ruled that Christians in the country are allowed to use the word “Allah” and three other words of Arabic origin in their religious publication for educational purpose. The Court of Appeal judge, Justice Nor Bee Arifin said that the directive that banned the use of the four words by non-Muslims was “illegal” and “unconstitutional”. In explaining her decision, the judge added that the Christian community in Sabah and Sarawak had been using the word “Allah” in the Malay language to mean “God” for generations in their religious practice of Christianity for over 400 years since the 1600s and this could not be ignored. In a response to the decision, the Sultan of the state of Selangor declared that the use of the word “Allah” in reference to God in Christian publications or the Christians’ Bible in Bahasa Malaysia will not be allowed in the state. The Selangor Islamic Religious Council (MAIS) was instructed to apply to join the federal government’s appeal against the recent High Court decision.

Comment:
This issue had been kept in the dark for more than a decade until the High Court made this ruling. Actually, in 2009, the High Court made a similar ruling when it allowed the Herald – The Catholic Weekly to use the word ‘Allah’ in its publication. The decision created a row when the Muslims who protested against the High Court’s decision argued that the word ‘Allah’ is the exclusive right of Muslims and other religions have no right to use it. Today, similar Muslim voices has been heard and criticisms were thrown at several religious figures, especially the Minister of Religion for his apparent silence and indifference over the decision.

It should be noted that although the concern of some Muslims that the use of the word ‘Allah’ by the Christians will cause confusion is well-founded, the issue should be answered based on Shariah texts. This is the position we must take as a Muslim. The word Allah had been used by the Arabs even before the time of Rasulullah (saw). The kuffar of Quraysh had been using the word Allah in their daily lives, both during worship and in their oaths. When Rasulullah (saw) came, the use of the word Allah remained – both by the disbelievers of the People of the Book and the polytheists. This was never prevented by the Prophet (saw). On the other hand, what Rasulullah (saw) condemned was the actions of those who associate partners with Allah and refuse to believe in Al-Quran. In other words, the concern of Rasulullah (saw) is the corrupt aqeedah and corrupt system practiced by the kuffar. Furthermore, there are many ayaat in the Quran where Allah acknowledges the use of His name by the disbelievers but curses those who turn away from worshipping Him and associate partners to Him.

“Lo, religion is exclusively devoted to Allah. Your religion is entirely consecrated to Him. As for those who have taken others than Allah for their guardians, (they say): “We worship them only that they may bring us nearer to Allah.” Allah will judge between them concerning what they differ about. Verily Allah does not guide anyone who is given to sheer lying, is an utter unbeliever.” [Az-Zumar 39].

“Surely, disbelievers are those who say, Allah is the third of the three, while there is no god but One God. If they do not desist from what they say, a painful punishment shall certainly befall such disbelievers.” [al-Maidah 73].

It is thus important that we understand this issue from the perspective of the Quran and the Sunnah. The real issue is not the usage of the word Allah but the context in which the word is used. And how this issue is to be dealt with is clearly stipulated in many ayaat in the Quran and examples from the Sunnah.

Allah has already reminded us that the kuffar will never stop trying to mislead Muslims. For hundreds of years, through missionary and orientalist attacks, they tried to mislead Muslims from within. Sadly, they finally succeeded in weakening and destroying not only the Muslims, but also the shield that protects the Ummah and Islam – the Khilafah (Caliphate). The Islamic way of life is now replaced by Western thoughts and systems. The kuffar is instrumental in ensuring that the Islamic ideology is absent in the life of Muslims today. Capitalism and democracy dominate our lives and they ensure that we busy ourselves with issues that are far from lodging their position in controlling us. Consequently, we only dabble in issues such as the use of the word Allah when at the same time, we sweep Allah’s law under the carpet!! And worse, we claim to fight for Islam, but we do this by relying upon the Federal Constitution which was created by the kuffar in the first place!!!

May Allah guide us to the straight path and give us the strength to free ourselves from the kuffar and unite under the shield of the Khilafah!