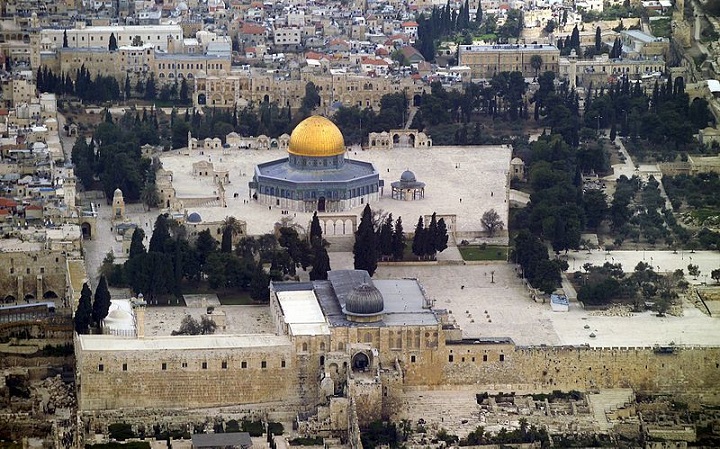 The first qiblah of the Muslims with its blessed precinct, Al-Aqsa Masjid is calling out to the armed forces of the Ummah for its defense. Allah (swt) said,

“Glory be to the One Who took His servant Muḥammad by night from the Sacred Mosque to the Farthest Mosque whose surroundings We have blessed” [Al-Isra:1]. However, while celebrating Eid with troops on the Line of Control, General Bajwa limited defense to the defense of the motherland of Pakistan alone. So, General Bajwa refused to take responsibility for the protection of Masjid Al-Aqsa, whilst also abandoning the responsibility for the liberation of Occupied Kashmir. Furthermore, Bajwa said that the Kashmir issue should be resolved in accordance with the resolutions of the colonialist tool, the United Nations, whilst previously General Bajwa had also confessed to continuing secret negotiations with the Hindu State over Kashmir. As for the political leadership, Imran Khan and Shah Mehmood Qureshi have been appealing to the OIC and the so-called international community, when they must mobilize the willing and able armed forces of Pakistan.

In Islam, the leadership of Muslims is not granted on the basis of seniority or votes, but on responsibility, capability and obedience to Allah (swt) and His Messenger (saw). Pakistan’s current leadership has lost the trust of the Ummah and the armed forces, as they value their posts and privileges more than Muslim sanctities, trading them for a cheap price. Worse, these rulers use the power of the Ummah to further the interests of the West. When the Jewish state invaded Palestinian territory, General Bajwa was active in protecting US interests in Kabul, whilst restraining our willing and able forces from liberating Occupied Kashmir. So let the sincere officers seize the rulers by their necks so they can mobilize for the liberation of Palestine and Occupied Kashmir. Allah (swt) said,

“Among the believers there are those who have remained true to the covenant they made with Allah. Among those some of them have fulfilled their vow and others await the appointed time. They have not changed in the least.” [Al-Ahzab:23].

O Officers of Pakistan’s Armed Forces! If you do not respond to the cries of the elders, children, women and helpless men of Palestine and Kashmir, then the warning of Allah (swt) is clear. Allah (swt) said,

“If you do not march forth, Allah will chastise you grievously and will replace you by another people, while you will in no way be able to harm Him. Allah has power over everything.” [At-Tauba: 39]. So, O Pakistan’s armed forces, if not now, then when? Every excuse is gone and it’s time to act, as the Ummah has made clear to you its goodness and desire. This Ummah is with you as is Allah (swt), so mobilize and don’t worry about the economy for this Ummah will shower the treasures of its homes upon you, whilst Allah (swt) is Ar-Razzaq. Mobilize and this Ummah will offer its sons to fight alongside you. Indeed, the military commander who will wipe out the Jewish entity and raise the banner of Islam in Srinager, will be remembered by future generations of this Ummah as General Salahudin is today.

So what of the military commander who will have the status of Saad bin Mu’adh (ra), who granted his Nussrah to bring Islam to power and authority as an Islamic State? It is the same Islamic state that made Palestine and Al-Quds part of the Abode of Islam in the time of the Khaleefah Rashid, Omar al-Farooq (ra), and whose commander Salahuddin liberated it from the Crusaders. So, O Ansar of today, grant Nussrah to Hizb ut Tahrir for the re-establishment of the Khilafah Rashida (Rightly Guided Caliphate) on the Method of Prophethood, so that under the leadership of a Khaleefah Rashid you can finally mobilize to liberate Al-Aqsa Masjid, Kashmir and other occupied Muslim Lands.