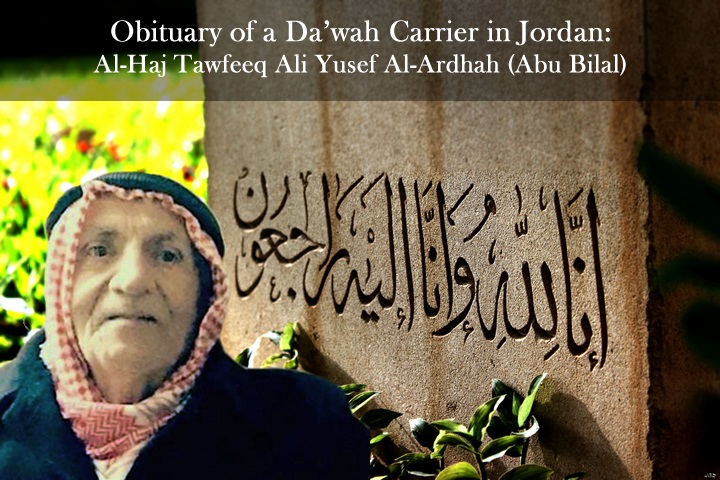 “Among the believers are men true to what they promised Allah. Among them is he who has fulfilled his vow [to the death], and among them is he who awaits [his chance], and they did not alter [the terms of their commitment] by any alteration.”

With conviction in Allah’s (swt) fate, Hizb ut Tahrir / Wilayah Jordan mourns to the Muslim Ummah one of its righteous Shabab:

Whose soul ascended to its Lord yesterday evening, Sunday December 9, 2018. The deceased, was one of the early Shabab, who hastened to carry the Dawah of resuming the Islamic way of life in the Khilafah Rashidah (righteous Caliphate) state on the method of the Prophethood with Hizb ut Tahrir since 1953. During his life, he was plagued by many tribulations and difficulties and was pursued by the oppressors but this did not cease his resolve and continued to be devoted to his oath, faithful guardian of Islam, seeking forgiveness from Allah (swt) and a garden as wide as the heavens and earth, and receiving good tidings of Allah’s promise. This is testified by everyone who knew him, though we do not ascribe purity to anyone before Allah (swt).

“Indeed we belong to Allah, and indeed to Him we will return.”