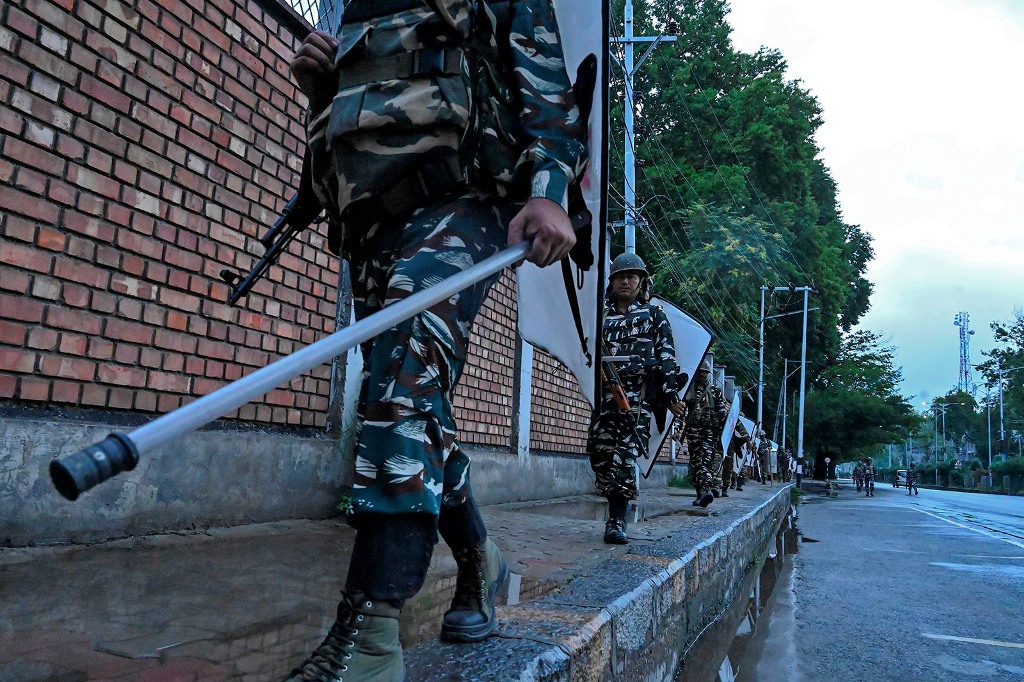 After forcibly annexing Occupied Kashmir on 5th August 2019, the Hindu State is growing in its regional threat. Modi hunts those who fight his occupying forces, spying, seizing, maiming, torturing and executing. Like the brutal British Raj, Modi collectively punishes those who support fighting, imposing a curfew and curtailing supplies of food and medicine. Like the deceitful Jewish entity, the Hindu State is changing the facts on the ground in overwhelmingly Muslim-majority regions, through a policy of settlement and displacement. Growing in its threat, the Hindu State has violated the Line of Control, which separates Occupied Kashmir from Azad (Liberated) Kashmir, thousands of times, martyring Muslims, both civilian and military alike.

The Hindu State grows in its threat, even though its demoralized and divided army has never been a match for any Muslim armed force that fights, without restriction, in the pursuit of martyrdom. At the time of partition, when the Muslims of Pakistan facilitated the Muslims of Kashmir in fighting, the Hindu State was unable to prevent the liberation of Azad (Liberated) Kashmir. For over seven decades, Pakistan’s facilitation of fighting in Kashmir prevented the Hindu State from ever consolidating its occupation. Even now, Pakistan’s armed forces can expel the Hindu State’s occupying forces, who remain shaken after the devastating, but limited, military strike of February 2019.

However, instead of cutting down the growing threat and confronting the armed force of the Hindu State with armed force, instead Pakistan’s rulers are facilitating the Hindu State. Granting much needed relief to the exhausted troops of the Hindu State, Pakistan’s rulers not only restrain our armed forces from fighting, they prevent any facilitation of the fighting in Kashmir. After orders from his masters in Washington, Imran Khan declared on 18 September 2019, “Anyone from Pakistan wanting to fight in Kashmir or go for Jihad in Kashmir would do the greatest injustice to the Kashmiris… Anyone making any such attempt would be an enemy of Pakistan as well as an enemy of Kashmiris.”

The hardening of Pakistan’s rulers of the Line of Control to prevent fighting in Occupied Kashmir, Pakistan’s rulers soften borders with the Hindu State, to facilitate its growth as a regional power. They softened the border at Kartarpur, opening a door for the enemy into the fortress. They softened the Wagah border, for Afghanistan’s exports, granting the Hindu State the opportunity to increase its ties and influence in Afghanistan. They choke the supply of funds and weapons for those fighting in Kashmir, whilst rapidly releasing the enemy pilot, Abhinandan. They abduct and torture those who fight in Kashmir, whilst extending visiting rights for the captured Indian spy mastermind, Kulbhushan.

Pakistan’s treacherous rulers are facilitating the Hindu State because they are ordered to do so by their masters in the United States. The American plan is to ensure the rise of India in the region to confront both China and the Islamic revival. However, Washington is well aware that there is no hope of India’s rise, if Pakistan challenges it in any shape or form, at any time. Thus, the US completely depends on Pakistan’s rulers to fully restrain Pakistan, to make Indian dominance possible. That is why the US is full of praise for Imran Khan and firmly supportive of the extension in service of General Bajwa, as they both sell their souls on the path of unprecedented treachery.

The Bajwa-Imran regime denounces Jihad in Kashmir as an injustice, even though RasulAllah ﷺ said, «لَا هِجْرَةَ بَعْدَ الْفَتْحِ وَلكِنْ جِهَادٌ وَنِيَّةٌ، وَإِذَا اسْتُنْفِرْتُمْ فَانْفِرُوا» “There is no Hijrah (to Madinah) after the Victory (over Makkah), but only Jihad and good intention. If you were required to march forth, then march forth.” [Bukhari]. It treats those who fight occupation as enemies and fighting as Fitnah (affliction), even though Allah (swt) commanded,وَاقْتُلُوهُمْ حَيْثُ ثَقِفْتُمُوهُمْ وَأَخْرِجُوهُم مِّنْ حَيْثُ أَخْرَجُوكُمْ وَالْفِتْنَةُ أَشَدُّ مِنَ الْقَتْلِ  “And kill them wherever you overtake them and expel them from wherever they have expelled you, and Fitnah is worse than killing.” [Surah al-Baqarah 2:191].

Unrepentant until today, the Bajwa-Imran regime pleads that war is not an option because the Hindu State and Pakistan have nuclear weapons, even though that did not deter either China or India from fighting, recently, over the Muslim Lands of Kashmir. It insists that we are too poor to fight, even though our land is immensely rich, but impoverished by the laws of disobedience to Allah (swt), which the regime itself implements, whilst we will empty our houses and bind our bellies, for the sake of pleasing Allah (swt). It claims there is honour and dignity in the abandoning of Jihad, even though RasuAllah ﷺ warned, «مَا تَرَكَ قَوْمٌ الْجِهَادَ إلاّ ذُلّوا» “No people abandon Jihad except that they are humiliated.” [Ahmad]

The Bajwa-Imran regime is collaborating with the United States, facilitating the rise of the enemy in the region. The Bajwa-Imran regime restrains you, so that the enemy strengthens its foothold and rises in its threat, even though RasulAllah ﷺ said, «وَالْجِهَادُ مَاضٍ مُنْذُ بَعَثَنِيَ اللَّهُ إِلَى أَنْ يُقَاتِلَ آخِرُ أُمَّتِي الدَّجَّالَ لاَ يُبْطِلُهُ جَوْرُ جَائِرٍ وَلاَ عَدْلُ عَادِلٍ، وَالإِيمَانُ بِالأَقْدَارِ» “And jihad will be performed continuously since the day Allah sent me as a prophet until the day the last member of my community will fight with the Dajjal. The tyranny of any tyrant and the justice of any just (ruler) will not invalidate it.” [Abu Daud]. If the rulers had accepted to mobilize you, then they would have acted correctly. However, since they prevent you from fighting, you are obliged to remove them and replace them with rulers and commanders who will mobilize you in the fields of jihad.

Depose the treacherous Bajwa-Imran regime, extending your Nussrah for the re-establishment of the Khilafah (Caliphate) on the Method of Prophethood ﷺ, so that you can fulfil your duty, unrestrained. Be like the Ansaar who supported Allah (swt) and His Messenger ﷺ, such that Allah (swt) praised them in His verses and the angels rushed to the funeral of their commander, Sa’ad bin Muadh (ra). RasulAllah ﷺ said about the funeral of Sa’ad bin Muadh (ra), «إِنَّ الْمَلَائِكَةَ كَانَتْ تَحْمِلُهُ» “Verily, Angels are carrying him.” [Tirmidhi]. Grant your Nussrah now to Hizb ut Tahrir under its Ameer, Sheikh Ata Bin Khalil Abu al-Rashtah, so that you are led to victory after victory, in the face of the believing Mujahid is one of two goals: victory or martyrdom. RasulAllah ﷺ said, «مَا أَحَدٌ يَدْخُلُ الْجَنَّةَ يُحِبُّ أَنْ يَرْجِعَ إِلَى الدُّنْيَا وَلَهُ مَا عَلَى الأَرْضِ مِنْ شَىْءٍ، إِلاَّ الشَّهِيدُ، يَتَمَنَّى أَنْ يَرْجِعَ إِلَى الدُّنْيَا فَيُقْتَلَ عَشْرَ مَرَّاتٍ، لِمَا يَرَى مِنَ الْكَرَامَةِ» “Nobody who enters Paradise likes to go back to the world even if he got everything on the earth, except a Mujahid who wishes to return to the world so that he may be martyred ten times because of the dignity he receives (from Allah).” [Bukhari]