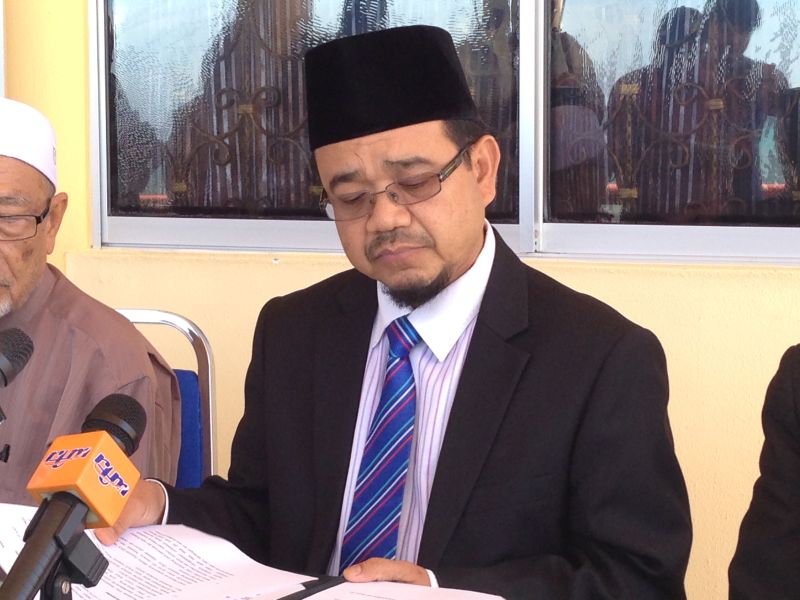 “O Mufti! Let’s Discuss, Don’t Defame”. This is the message delivered by 10 Shabab of Hizb ut Tahrir / Malaysia (HTM) in front of the office of the Mufti of Sabah on 13/11/2017. “Go out, this is not your place…you have embarrassed me.” This is in turn, the answer of the Mufti of Sabah, Haji Bungsu @ Aziz bin Haji Jaafar, when he saw three representatives of HTM waiting to meet him at the waiting room at Level 6, Block B, MUIS Building, Kota Kinabalu, Sabah. It was indeed the third attempt of HTM to meet the Mufti after not being attended to in the last two attempts. The difference is that this time, the Shabab brought with them a written answer/objection against the fatwa issued against Hizb ut Tahrir.

We hereby express our strong objection on the fatwa which is full of defamation, lies, deviation and confusion against Hizb ut Tahrir. It is indeed ironical that the fatwa is an exact copy of Selangor’s fatwa on Hizb ut Tahrir. It is indeed shameful for a religious institution in the name of the Fatwa Council to have a two-day discussion (muzakarah), to only culminate in a fatwa which is an exact copy, sentence by sentence, word by word, letter by letter, punctuation by punctuation, comma by comma and dot by dot, without changing anything, of Selangor’s fatwa!

At a time when the secular-democratic system has brought about destruction to the society as it legalizes the unlawful and vice versa; at a time when so many leaders are proven to be corrupt and oppress people; at a time when vice, falsehood and evil, even shirk, are so widespread within the society, especially in Sabah; how can you ignore all those haram (unlawfulness) to happen, and you chose instead to ban Hizb ut Tahrir  who is actively working towards enjoining the good and prohibiting the evil?

O Sabah Fatwa Council! You have followed the footsteps of the Selangor Fatwa Committee, by accusing us deviant, without clarification (tabayyun) beforehand and close all doors of discussion. We wish to repeat our stand that we are always ready to discuss, dialogue (muzakarah) or even debate, against whatever that is stated in your fatwa, in our effort to seek and establish the truth, provided that it is done in accordance with Islamic teachings, in the spirit of brotherhood and justice. What you have done, in so far as the fatwa is concerned is clearly nothing more than a political fatwa aimed at preventing and stopping the da’wah of Hizb ut Tahrir in establishing the laws of Allah (swt) entirely by re-establishing the Righteous Khilafah upon the method of the Prophethood on this earth.

We hereby urge and hope that the fatwa be withdrawn immediately. Do repent and ask forgiveness from Allah (swt) on what you have perpetrated. Despite being defamed and maltreated in such a malicious way, we are always willing to forgive you with open hearts, because the noble virtue of a Muslim is to apologize and forgive his brother. Do not ever let this defamation prolong, for it will inevitably cause you loss in the world, let alone in the hereafter. Please be reminded that every son of Adam will do wrong and the best of wrongdoers are those who repent.

O Mufti! You are the head of the Sabah Fatwa Council who holds a high position and is highly respected in the eyes of society. If not for taking into account that we remind you as a Muslim, let alone as a Mufti who holds a noble place in the sight of Allah (swt), otherwise we would have just ignored you without reminding. So, we invite to listen to our advice and withdraw your fatwa immediately. Fear Allah (swt) and do not fear the people who might have control over you. Do say the truth O Mufti and withdraw the defamatory fatwa that you have issued against Hizb ut Tahrir, even though you may face the wrath of the government by accepting our advice. Seek the blessing of Allah (swt) and do not seek the blessing of man. Indeed, to Allah (swt) we shall all return and to Him we shall be accountable. So, let us appear before Allah (swt) with the lightest weight of sin, without shouldering the sins of defaming others and the sins of the people whom we have defamed.