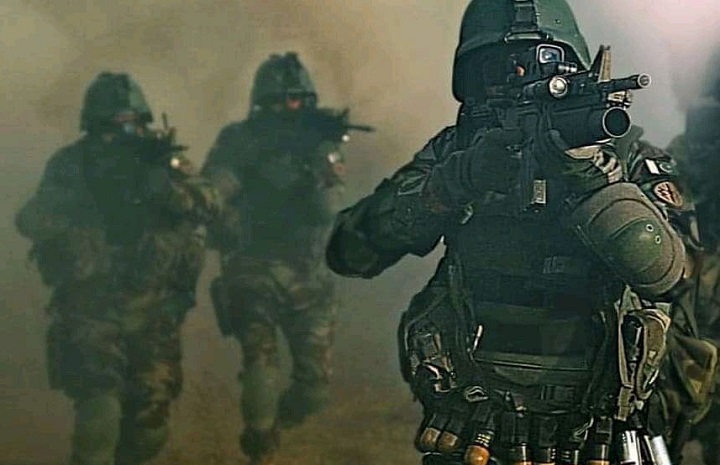 The Supreme Court of Karnataka, India, ruled that, “We are of the considered opinion that wearing of hijab by Muslim women does not form a part of essential religious practice,” reinforcing an earlier state ruling banning the Khimar head covering in classrooms. The ruling stated that allowing Muslim women to wear the Hijab in the classroom contradicts their freedoms and the spirit of the constitution based on India’s “positive secularism.”

O Muslims of Pakistan! Your Muslim sisters in India are exposed regarding their honor, whilst many of our families made Hijrah from India to settle in Pakistan, with distant relatives in India that are subjected to various attacks upon their Deen. Sometimes they are prevented from eating what Allah (swt) has made Halal for them and are even martyred for that. At other times, the houses of Allah (swt), the sanctified masajid, are demolished upon their heads. And at yet other times they are subject to abhorrent racism, denied the issuance of official documents… and much more. Now they are being challenged regarding their honor, so how must we be and what must we do?!

Did the Muslims who made Hijrah to Madinah forget their weak brothers, who remained behind them in Makkah, within the idol-worshippers of Makkah? Or did they return to Makkah as conquerors, liberators and victors to secure their honor?! Is not the Messenger of Allah (saw) the best example for you and are not the Companions (ra) guiding stars for you?! Why do you keep silent about the violation of your honor?! Do you expect from your rulers, who do not rule by all that Allah (swt) has revealed, fighting those who work to uphold His Word as the highest, to achieve victory for your people in the eastern regions of the Indian Subcontinent, which was ruled by Islam for centuries?! Do you not see that do not even utter noteworthy words denouncing the decision of the Indian court, let alone mobilize our willing troops to secure the Muslims in India and Occupied Kashmir?!

Indeed, we must work with Hizb ut Tahrir to uproot this cowardly regime, establishing the Khilafah (Caliphate) on the Method of the Prophethood, so that our Khaleefah Rashid (rightly guided caliph) leads us to conquer India, just as the Messenger of Allah (saw) led the Muhajireen and the Ansar to conquer Makkah, liberating the Muslims who remained there after the Hijrah. Allah (swt) said,

“When Allah’s help comes and the victory – and you see the people embracing Allah’s Deen in crowds – then glorify the praises of your Lord and seek His forgiveness, for certainly He is ever Accepting of Repentance.” [TMQ Surah an-Nasr 110-1-3].

O Muslims of Pakistan! The Satanic court in India was not satisfied with prohibiting Muslim women from wearing their blessed Khimar crowns on their heads, a symbol of their chastity and honor, which is lost to the common kafir women from the secular and other idol worshipping people of India, including the woman who is a wife shared by men… Instead, the court of Satan issued a “fatwa” of 129 pages to “guide” Muslims over the rulings of the Final Revelation, where the court ruling alluded to verses in the Noble Qur’an and Islamic jurisprudence, stating, “It can hardly be argued that hijab being a matter of attire, can be justifiably treated as fundamental to Islam. It is not that if the alleged practice of wearing hijab is not adhered to, those not wearing the hijab become the sinners, Islam loses its glory and ceases to be a religion.” Indeed, this “fatwa” is a blatant attack on our Deen. Who are these idol worshippers to give fatwas or dare to delve into the ayaat of Allah (swt)?! Are we not those who shook the world when the cursed Salman Rushdie wrote his filth and then again when the Barbari Masjid was martyred, without caring for the requirements of India’s secularism, “positive” or otherwise? Allah (swt) said,

“Glorified is the Lord of the heavens and the earth, the Lord of the Throne, far above what they claim. – So let them indulge (in falsehood) and amuse themselves until they face their Day, which they have been warned of.” [TMQ Surah Az-Zukhruf 43: 82-83].

O Soldiers of Allah (swt) in Pakistan! The Messenger of Allah (saw) mobilized the entire army of the noble Companions (saw) for the sake of one woman whose nakedness was exposed to the tribe of Banu Qaynuqa, where a Jew violated the Hijab of a Muslim woman, who came to the market of Banu Qaynuqa. She sat with one of the Jewish goldsmiths to trade with him, whilst the Jews wanted her to reveal her face and charms. When the Muslim woman refused to do that, one of the Jews came from behind her and tied the edge of her covering. So when she stood, the woman was exposed and she screamed. One of the Muslims came immediately and killed the Jew who violated the honor of the woman, whilst the Jews of Banu Qaynuqa gathered together against the Muslim and martyred him. Even though Banu Qaynuqa were amongst the people of training, tactics, weapons and fortresses, formidable in war and useful for the defense of Madinah, the Messenger of Allah (saw) found all of that was of no consequence before the dignity and honor of a single Muslim woman. And so he (saw) exiled the entire Jewish tribe as a punishment. So how must we be as soldiers of Allah (swt), lovers of the Messenger of Allah (saw), today?

O Soldiers of Allah (swt) in Pakistan! You know that your rulers and many of your military commanders are not of those who will ever defend the honor of Muslims. You have experienced their spinelessness in many places. They have not defended the honor of a single Muslim woman, whether in Occupied Kashmir or East Turkestan (Xinjiang) or Burma (Myanmar) or ash-Sham, including Al-Masjid Al-Aqsa. Indeed, the only one who defends the honor of Muslim women and preserves their honor is the Rightly Guided Khaleefah who follows the Method of Prophethood.

O Soldiers of Allah (swt) in Pakistan! It is the Khaleefah Rashid alone, as the commander of the Muslim armed forces, who will lead you soldiers of Allah (swt) to secure the honor of all Muslim women, returning the entire Indian Subcontinent to the Abode of Islam and ruling by all that Allah (swt) has revealed. We, Hizb ut Tahrir/ Wilayah Pakistan, extend our hands to you for your Nussrah, so we remove the ruling cowards from our country and establish the Khilafah (Caliphate) State on the Method of the Prophethood. Then we will liberate all the lands of the Indian Subcontinent and their suffering people from the filth of ruling by the idol worshippers. The Messenger of Allah (saw) said,