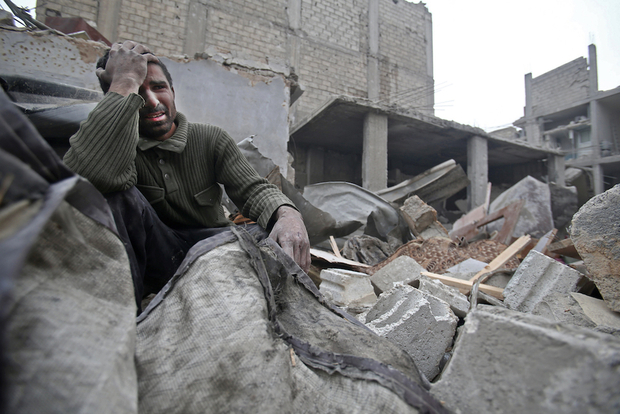 More than 2,000 air strikes were launched by the Russian Air Force (1150 raids) and the Syrian Air Force (900 raids) destroyed the people and the land; it destroyed hospitals, vegetable markets and bakeries, killing 900 martyrs and injuring 2,000 unarmed civilians. The whole world is complicit with the butcher of Damascus and the Moscow criminal, in their relentless brutality to annihilate the people of Ghouta, the heroes who refused to bow down to Pharaoh, or Nero of the century, Bashar. But Bashar is nothing more than a puppet who gave “legitimacy” to the Russian air force’s intervention, which reflects Putin’s deep-rooted hatred of Islam and Muslims.

The Western countries’ silence, the so-called “international community”, reveals their participation in this sinful aggression. These countries have already raised the slogan, “Never Again” to prevent the recurrence of the so-called Holocaust. Yet it was not implemented in Srebrenica-Bosnia in 1995, when UN peacekeepers handed over Muslims to the criminal gangs of Serbs and gave them the green light to commit the Holocaust against 11,000 Muslims; neither it was implemented in Rwanda in 1994 nor in Central Africa in 2016. Nor in Myanmar in 2017.

No wonder Col. John Thomas of the U.S. Central Command Public Affairs Office told the Daily Beast Newspaper: “Those aren’t our issues,” “CENTCOM has no part in anything in Syria other than defeat of ISIS and some counterterrorism authority,”

Stopping the biggest terrorist, Bashar Al-Assad, a loyal American agent, is not part of the US military mission in Syria. UN Under-Secretary-General for Political Affairs Jeffrey Feltman, continuing the criminal play, told a UN Security Council session on 28/2/ 2018, on the humanitarian situation in Syria, that the United Nations will continue “to call forcefully for justice and accountability,” “those responsible for the catalogue of horrors that mark daily life in Syria…must be held accountable”,

This green light explains Lavrov’s statement: “There are groups in both Eastern Ghouta and Idlib, which are presented as moderates by their Western partners and sponsors, including Ahrar Al-Sham and Jaish Al-Islam, they are cooperating with Ahrar Al-Sham movement,” adding that the Syrian regime and Moscow will continue to target them. Yes. Lavrov accuses Ahrar Al-Sham movement, which is waging a fierce war against Hay’at Tahrir Al-Sham in Idlib that it is cooperating with this branded “terrorist” organization, to justify the destruction campaign based on the scorched earth policy in Ghouta.

That is why neither Russia nor the United Nations accepted Jaish Al-Islam and Failaq Ar-Rahman’s offer; to take out the elements of Hay’at Tahrir Al-Sham from Al-Ghouta. Taking them out destroys the pretext of fighting the terrorists. And leaving them inside justifies the bombing of children and women and blowing up of hospitals, vegetable markets, bakeries, pharmacies and ambulances. All this under the watchful eyes and ears of the “international community” which raises the banner of civilization and human rights!!

And is also under the sight and hearing of Muslim rulers who are busy serving the interests of their masters, the colonial West. And it is under the sight and hearing of the leaders of the armies in Muslim countries. These armies, which drain thousands of billions of Muslim wealth, if they do not carry out their duties to protect Muslims and defend their honour and blood, what is the purpose of their existence?

O Allah we are defeated, make us victorious.