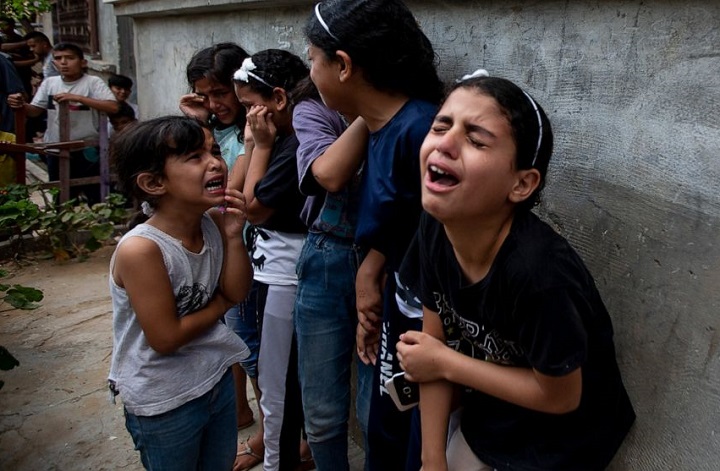 In the past two painful days, forty-four Muslims, including children, have been martyred, whilst more than three hundred have been injured, as a result of the savage bombardment by the Jewish forces of the Gaza Strip, Palestine, where even the hospital was not spared. From Indonesia to Morocco, the Islamic Ummah is reacting restlessly in anger, compelled by the powerful bond of brotherhood in Islam. However, the rulers over the necks of the Ummah, including the rulers of Pakistan, are motionless, but for lip service. The rulers of Muslims react as if this bombing is not upon the homes of the Muslims of Palestine, the Blessed Land, the land of the First Qibla, the Isra’a and Miraj of the Messenger of Allah (saw). They do not even react as they would have, if this open destruction were just some military exercise, destroying trees, birds, insects and shrubbery, in lands, far, far away. Worse, these rulers are even appealing to the very scoundrels and terrorists, the Western states and their so-called ‘international community,’ upon which the Jews depend, whilst committing these crimes, uninterrupted.

O Armed Forces of Pakistan! You see that whenever the Jewish existence wants, it bathes the Muslims of Palestine in their own blood. Should not the Jewish entity fear that due to its crimes, if even a single army of Muslims moves, it will result in the end of existence, despite its support from Western states? Should it not fear and desist, because it is surrounded by Muslim Lands and their armed forces? No! The Jewish entity has no fear of military response, because it knows that the rulers of Muslims are agents of colonialism, who will never move against it. Instead, they line up in rows to normalize its existence! So how long will you allow those who care nothing for the sanctity of Al-Aqsa, Muslim Lands and the blood of Muslims, to restrain you?!

O Officers of the Armed Forces of Pakistan! O Sons of Salahudin! Uproot the thrones of these shameless rulers and treacherous leadership. Give Nussrah for the Khilafah (Caliphate) on the Method of Prophethood, that will annihilate the Jewish occupation. Al-Masjid Al-Aqsa awaits the roar of your liberating tanks, ships, artillery and guns. It awaits the takbeers of your infantry and SSG, before you offer Salah, after victory, within its blessed precincts. So grant your Nussrah for the Khilafah, so that you raise takbeer as you are led in Jihad, by the Khaleefah of the Muslims. Allah (swt) said,

“And kill them wherever you overcame them, and expel them from where they expelled you” [TMQ Surah Al-Baqarah 2:191].