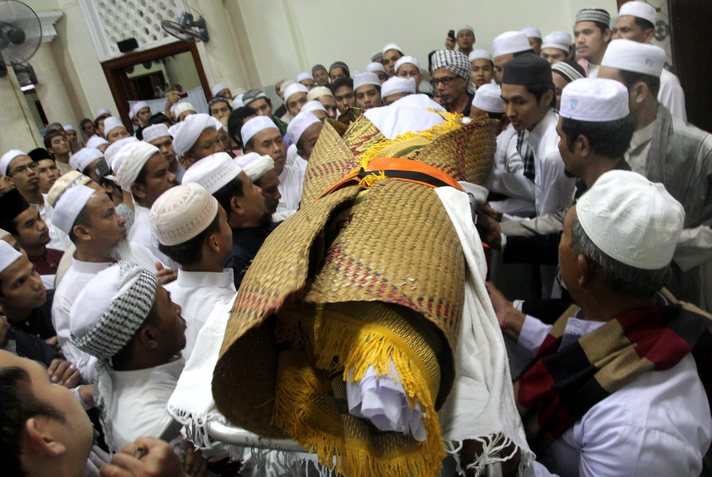 Kiblat.net reported that the Pattani Muslims on Wednesday (17/08) also congratulated the celebration of Indonesian Independence’s Day from the Dutch and Japanese colonial hands. It is an irony because the Pattani Malay Muslims are now still under the grip of the Siam. Pattani Muslims, who are mostly Malay Muslims, are often under pressures from the Thai government. “Whereas independence is a genuine right of all nations and any form of alien occupation should thus be erased from the earth as not in conformity with humanity and justice. We, the Pattani Malay Muslims congrats the anniversary of independence of the Republic of Indonesia,” written in the page of Media Information News which often broadcasts the news of Pattani Muslims, as reported by Kiblat.net.

`O my brothers and sisters of Pattani Muslims, know that actually none of your brothers is independent! Both the Muslims in Indonesia and Malaysia, the two largest Muslim countries in Southeast Asia, are still chained together by non-physical modern colonialism.

O my brother, indeed we heard your screams, you suffered for decades under the oppression of the Siam nation – Thailand, and how bad we are for being powerless to liberate you with our strength!

Yes, we in Indonesia are independent physically, but mentally, we are constantly being occupied and terrorized by the evil narratives that have attacked our Islamic identities and have divided us with artificial western labels such as terrorist, radical, fundamentalist, and moderate moderate. Our honors have been torn apart because of the millions of Muslim women who are the heart of our honors— forced to become victims of modern slavery, work thousands of kilometers away for a bite, and leave their main role as mother. The hands of strangers have seized our wealth, foreigners have dominated all natural resources such as gold, oil, and gas, and even the politics of the governance and legislation have been easily accessible by the foreign powers. State sovereignty is just a slogan, because the truth, the leader of this country exists only to serve the interests of his foreign master.

Moreover, O Pattani Muslims, the meaning of true independence is if we are all free of servitude to creatures, both its system and its law. However, secularism is still convolute us, meanwhile the revelation of Allah سبحانه وتعالى – which is supposed to be sovereign- is disposed away from the life of our nation. O my brother Pattani Muslims, the other meaning of independence for the Ummah of Muhammad Saw is when we UNITE! We are united in one identity, one breath, and one treatise of our Prophet Muhammad ﷺ. However, the fact is we are all still trapped in nation-state global order system that ensnares and divides us by cheap barriers of nationalism while removes the great bond of Islam brotherhood. We, the Indonesian Muslims, could barely even hear your situation in southern Thailand; our concern is blinded by national barriers and false boundaries of nationalism. Forgive us, Yaa Rabb …

O my brothers and sisters in Islam, we are all obliged to live under the political leadership of the Khilafah. It is haraam for us to be fragmented under more than one political leadership, let alone to live oppressed under the tyranny of the majority of the Kuffar like what happens to you, Pattani Muslims in Thailand. The Khilafah will unite the territories of Pattani, Yala, and Narathiwat in Peninsular Malaysia, the Indonesian archipelago, the islands of the Sulu-Mindanao in the southern Philippines, and throughout the Islamic world. It will overshadow us with the true independence, i.e. to unite only to be the servants of Allah alone. Remember the Prophet ﷺ once wrote a letter to the people of Najran, which among its contents reads: