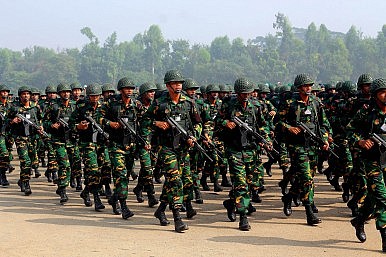 Amid deafening inaction by the treacherous Muslim rulers – the illegitimate brood of the colonial West – the coward polytheist state India has implemented imperial design to fully occupy Kashmir by scrapping their constitution’s Article 370 and 35A. The Hindu state has already moved to bifurcate Kashmir into two union territories to be governed directly by Delhi which will be like a colonial-settler project to alter the demographic character of that Muslim dominated region and make it another ‘Palestine’ of this subcontinent by driving out the Muslims therein.

O Muslims! Is not this fate of Kashmir an inevitable consequence of the absence of the true and sincere leadership of the Ummah – the Khalifah Rashidah (rightly guided Caliphate)? Kashmir has been under Indian occupation for decades, and did not get defenseless now due to the revoking of Article 370, but rather the Muslim lands were left defenseless from the day when the Kafir imperialist with the aid from our puppet rulers destroyed the Khilafah (Caliphate) in 3rd March 1924 CE, and divided us into more than 50 nation states and forced us to accept their agents rulers and the manmade system. We have been weak and shield-less in front of our enemy, and they seized our lands like a predator seizes its prey, and their aggressions all over the Muslims land including Kashmir have spread. Behind a facade of so-called democracy, India has been oppressing the Muslims in Kashmir and in this region craftily till to date. But now when she has seen the strong demand for the second righteous Khilafah and fearing its imminent return, she has come out into the open with her hatred for the Muslims.

O Muslims! When the butcher Modi is desperately fulfilling his election pledges to fully occupy Kashmir, we find no sincere leadership in this region to look after the Ummah’s affairs. We are not surprised when we see that the Hasina regime, the obedient slave to the mutilator and murderer of the Muslims of Gujarat and Kashmir, is in absolute silence against this outrageous decision by saying it is India’s internal matter, or Pakistan is giving similar deceptive statements and not sending its strong military to liberate Kashmir, or when O.I.C. is dutifully giving its ‘lip service’. What can we expect from these backboneless agent rulers who are in the similar missions of oppressing and suppressing Muslim in their own lands, and working closely with their imperial masters to establish the regional dominance of Mushrik India? Is it not high time that we rejected the democratic system along with its illegitimate rulers, and brought back the shield for the Muslims – the mighty Khilafah, which will truly put an end to Imperialist Kafir-Mushriks aggressions in Palestine and Kashmir along with all other lands in the world. Rasul’Allah (saw) said:

O Sincere Officers in Bangladesh Military! The hostile Hindu State’s agenda is apparent as it is moving forward in full swing to extinguish Muslims in this region. Kashmir is just the beginning, and Muslims in Asam and West Bengal will be the eventual victims as they were also in murderer Modi’s election manifesto. O Officers! This is the Ummah of our beloved Prophet (saw) who are in dire straits, and only you have the capability to rescue them from the tyranny and oppression of the Mushrikeen. Fear Allah and the day of reckoning! How would you plan to face Al Muntaqim (the Punisher) when you would be accounted for travelling thousands of miles away for fighting colonial Kuffar’s UN war whereas you cannot even march a few miles to conquer this polytheist state when the persecuted Ummah in Kashmir and neighboring lands are longing for liberation at your hands? The blood of your ancestors Khalid bin Walid and Bakhtiar Khilzi is still running warm in your veins. O Officers! Take heed to the call of Hizb ut Tahrir! Remove your hands off our sellout rulers, uproot this evil democracy that breeds them, and give Nusrah to Hizb ut Tahrir for the reestablishment of Khilafah Rashidah on the way of Prophethood to rescue the weak and oppressed. The Khilafah will transform you into a formidable force, and declare Jihad against this Mushrik State to attain the glad tidings of the Messenger of Allah (saw) about the ‘conquest of Hind’. Allah (swt) says

“And what is wrong with you that you fight not in the Cause of Allah, and for those weak and oppressed among men, women, and children, whose cry is: Our Lord! Rescue us from this town whose people are oppressors.”
[Surah An-Nisa’a 4:75]