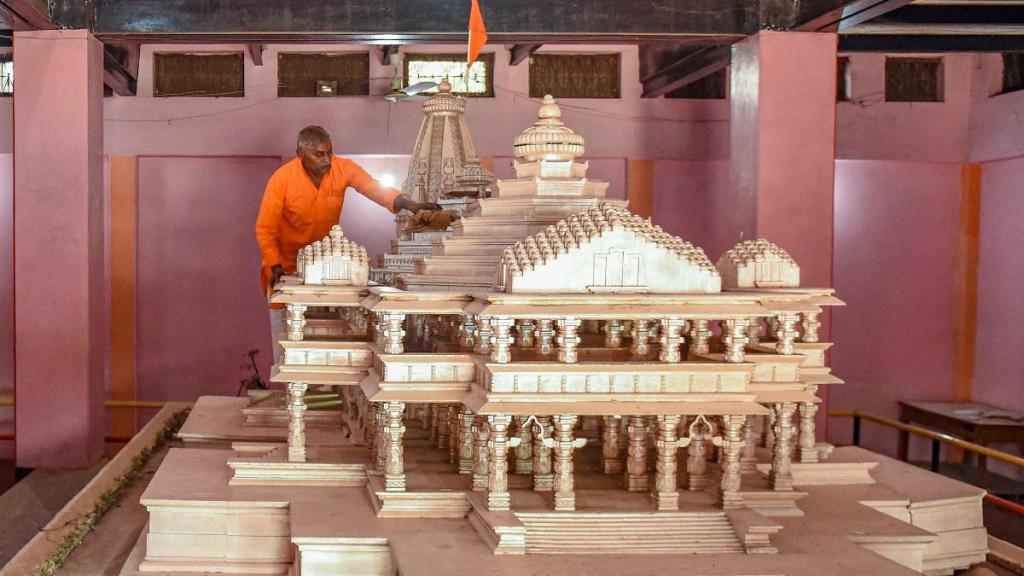 While we are still reeling from the total occupation and dissection of Kashmir, cowardly India has embarked on her next mission to further demoralize the Muslims of India and beyond by arbitrarily handing over the historical Babri Mosque site to the extremist Hindus for building the mythical “Ram Temple” there.

It is now evident that under the pretext of Hindutva ideology, a more sinister geopolitical ambition of India is in the making with full support from America to create and strengthen its nefarious agent in this region in the same way that it strengthens the illegal Jewish entity in the Middle East. Like the way the colonial West has portrayed the weak illegal Jewish entity as ‘invincible’ with the help of the treacherous Muslim rulers, a similar strategy is also being employed to portray cowardly India as a mighty figure in this region with the help of these traitorous accomplices of the West – the Muslim rulers – so that the Ummah submits to this status quo and gives up any hope of the return of the second Khilafah Rashidah (righteous Caliphate). Thus, India is carries out one after another her belligerent projects against the Muslims unchallenged, while the spineless Muslim rulers are treacherously giving legitimacy to those acts. We saw the outrageous action of the traitorous UAE ruler to give highest civilian medal to the butcher Modi days after India totally annexed Kashmir.  We also saw that how the mighty armed forces of Pakistan have been kept idle against Indian aggression by another traitor Imran Khan while he was busy diverting Ummah’s attention away from agitation through useless lip service and tweeting.  And instead of uttering any single word in support of the Ummah who have become restless about the Babri Mosque verdict, the deceitful Hasina government has labeled it as India’s internal matter and threatened that it would not tolerate any tension here due to the verdict!

O Muslims! More than 2000 Muslims had sacrificed their lives for this Babri Mosque, whereas building a temple in the place of this mosque is an internal matter of India in the eye of the Hasina regime! Compared to pleasing her Mushrik master India, the blood, honor and worship place of Muslims are so cheap in the eyes of this regime. Alas, how they deluded they are! They want us to accept the fictitious Indian supremacy and stay quiet against Hindutva hegemony in this region. Therefore, to only way to recover our honor in the face of this humiliation is to remove the treacherous Hasina regime – which is subservient in the face of Indian hegemony, and is protecting and aiding Mushrik India in its war against Muslims to serve the colonial geopolitical interests. This is the need of the hour that you work hard with Hizb ut Tahrir for the reestablishment of the Khilafah.

The Prophet ﷺ said, «إِنَّمَا الْإِمَامُ جُنَّةٌ يُقَاتَلُ مِنْ وَرَائِهِ وَيُتَّقَى بِهِ» “The Imam is but a shield, behind whom the Muslims fight and by whom they are protected.” [Muslim]. Indeed, Messenger of Allah ﷺ said the truth! As a guardian of Muslims only the Khaleefah (Caliph) can protect the blood, honor and mosque of Muslims, like Sultan Abdul Hamid did protect the sacred land of Palestine. Millions of gold coins were offered by the Jews for the State Treasury but he did not agree and did not bow to significant international pressure seeking permission to allow Jews to settle in Palestine. He replied with his famous statement, “The Jews may keep their millions. If the Khilafah is one day destroyed then they will be able to take Palestine without a price. But while I am alive, I would rather push a sword into my body than see the land of Palestine cut and given away from the Khilafah State.”

O Muslims! The imminent Khilafah State will unify the Muslim lands and dispatch her powerful military to conquer India. Then, you will see the defeat and humiliation of this enemy Hindu State and will witness the glad tidings of RasulAllah ﷺ regarding the “Conquest of Hind” (Ghazwa e Hind) by the will of Allah (swt). Abu Hurayrah (ra.) said: «وَعَدَنَا رَسُولُ اللَّهِ صَلَّى اللَّهُ عَلَيْهِ وَسَلَّمَ غَزْوَةَ الْهِنْدِ فَإِنْ أَدْرَكْتُهَا أُنْفِقْ فِيهَا نَفْسِي وَمَالِي وَإِنْ قُتِلْتُ كُنْتُ أَفْضَلَ الشُّهَدَاءِ وَإِنْ رَجَعْتُ فَأَنَا أَبُو هُرَيْرَةَ الْمُحَرَّرُ» “The Messenger of Allah ﷺ promised us that we would invade India. If I live to see that, I will sacrifice myself and my wealth. If I am killed, I will be one of the best of the martyrs, and if I come back, I will be Abu Hurairah Al-Muharrar.” Al-Muharrar: The one freed (from the Fire).” [Sunan an-Nasa’i].