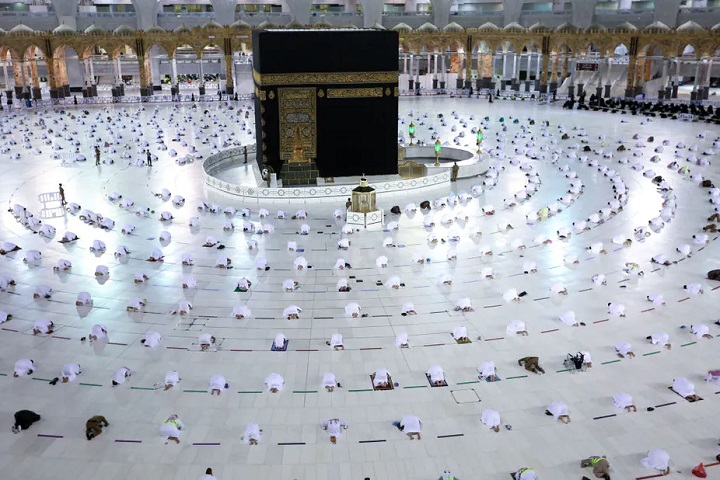 Ever since the Bani Saud family usurped the land of the noble Haramayn, the honorable land of Hijaz, after their alliance with the British and betrayal of the Uthmani Khilafah, this treacherous puppet family has only imposed obstacles before the noble Hujaaj to the House of Allah (swt) and the Haramayn. They have transformed this land of Islam, for all Muslims, to a family property, to the state of the Banu Saud, who rule by kufr and are loyal to the enemies of Allah (swt), the Western colonialist kuffar.

Since the Coronavirus pandemic, the government of Bani Saud has exploited the pandemic to seal the Sacred Ka’aba and the Masjid of the Prophet Muhammad (saw). So, the Sacred House was emptied of the modest numbers that were trickling into it with difficulty, because of the harsh practices of the Saudi government against the Hujjaj of the Sacred House of Allah (swt). In addition, the Islamic Ummah was deprived of visiting the purified Madinah Al-Munawwara of the Prophet (saw) and his (saw) Masjid. Thus Bani Saud has set a precedent that no evil ruler, with concealed hatred of Islam, has ever set before. The Messenger of Allah (saw) spoke the truth when he (saw) said,

“The knots of Islam will be undone one by one, each time a knot is undone the next one will be grasped, the first to be undone will be the Rule [of Islam; The Caliphate] and the last will be the Prayer (Salah)” (Ahmad and al-Tabarani). Indeed, matters have reached the untying of the knot of Hajj and Salah in the Haramayn.

In stark contrast, during the pandemic, the reckless government of Ibn Salman became active in the so-called “General Entertainment Authority,” removing obstacles to evil acts of disobedience. Not a week passes without the holding of parties that are full of immorality, with immoral people that are called artists, attended by thousands of lost, misguided youth. It is as if the virus is only active in the Noble Kaaba and the Masjid of the Prophet (saw) and does not find any place in concerts and dance halls. It is a clear indication that the government of Bani Saud intends to seal the Haramayn, as war against Allah (swt) and His Messenger (saw) and not out of concern for the Hujjaj.

The second year passes us by with the Saudi government obstructing Muslims from performing Hajj, despite the fact that most countries in the world have populations that have developed a degree of immunity at a mass level, through exposure to the virus or vaccine. The obstruction is there even though the trade in vaccines has spread widely, such that vaccination has become readily available in the markets, so any of the Hujjaj can take the vaccine before the Hajj. The obstruction is there even though the testing of the virus is swift and easy, clearing any individual of infection. So, obstructing Muslims from performing Hajj has nothing to do with managing the virus and limiting its spread. Instead, Banu Saud is preventing Muslims from performing one of the pillars of Islam, placing obstacles before the Saying of Allah (swt),

“And proclaim to the people the Hajj; they will come to you on foot and on every lean camel; they will come from every distant pass. So they may obtain the benefits (in store) for them and pronounce the Name of Allah on appointed days.” [Surah al-Hajj 22:27-28].

Moreover, the Banu Saud could never have obstructed the Hujjaj from the House of Allah (swt), if the existing governments and regimes in the Muslim World had secured Islam from them, including the regime in the country created in the name of Islam and Muslims, Pakistan. Instead, the rulers of Pakistan supported the rulers of Saudi Arabia in their alliance against Yemen and are prepared to send Pakistani forces to defend the Saudi regime, if they felt weakness in the regime, nearing collapse. So, the regime in Pakistan did not utter a word of rejection against the regime of Bani Saud, as it obstructed millions of Muslims of Pakistan from performing Umrah and the obligation of Hajj, over the past two years. It is a clear sign that the regime in Pakistan does not care about the worship of the Lord (swt) of the Noble House. It does not care about the Muslim Hujjaj in Pakistan or the performance of Umrah, for it fully recognizes the “right” of the Bani Saud family to usurp the Haramayn.

The Muslims of Pakistan, particularly the ‘Ulema, the influential and people of strength and Nussrah in Pakistan’s armed forces must denounce the regime in Pakistan for its silence over this crime. They must demand the regime withdraws its recognition of Banu Saud’s “right” to manage the affairs of the Hujjaj and it must send delegations of Hujjaj to the Sacred House of Allah (swt), even if it were by military aircraft.

We know that Pakistan’s regime does not care about Muslims of Pakistan performing Hajj and Umrah, for it is a secular regime that is no less criminal than the regime of Bani Saud. Indeed, if it were in control of the Haramayn, it would have done even worse than what the Saudi regime has done. How would that not be so, when Pakistan’s regime is an integral and pivotal part of the alliance of evil forces of the world, waging crusades against Islam, in the so-called “War on Terror”?!

Pakistan’s regime is an unbendingly, staunch ally of the master of the Saudi regime, America, such that both regimes follow the same Taaghoot closely.

Thus, the Muslims in Pakistan must first liberate themselves from the secular system in Pakistan, by establishing the Khilafah (Caliphate) on the Method of Prophethood. It is only then that the land of the Haramayn will be a jewel in the crown of the Khilafah, opening access to the Hujjaj, who will number in tens of millions, from the Ummah of two billion. So secure the Haramayn, O Muslims, by working with the sincere Shabab of Hizb ut Tahrir to establish the Khilafah that liberates the Haramayn and al-Bayt al-Muqaddis from defilement. The Messenger of Allah (saw) said, ‏