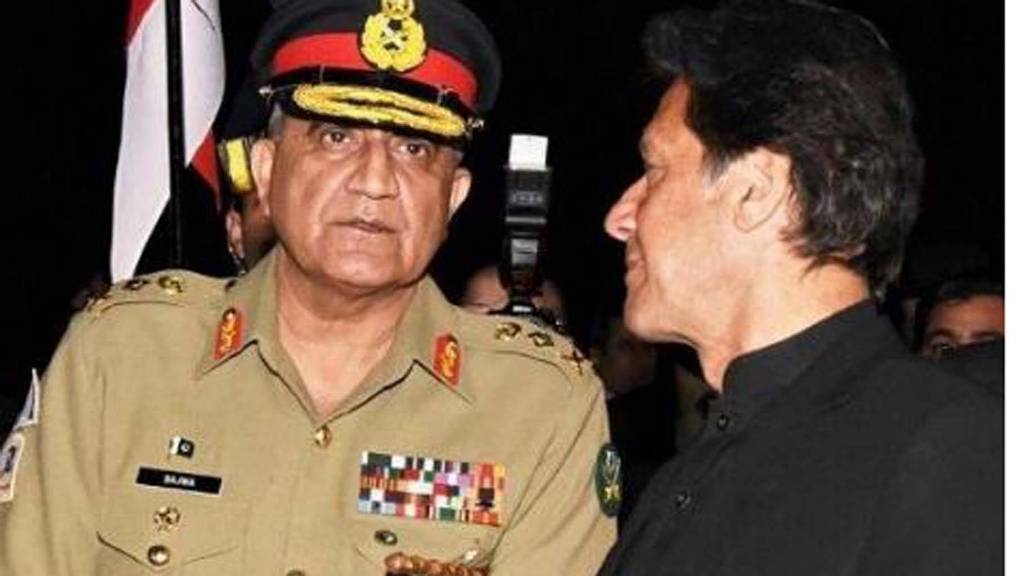 It is clear that the “New Pakistan” project has failed, as the noble Muslims of Pakistan are crushed by poverty, hardship and unemployment, whilst being wounded by the prolonged, unmet aggression against Occupied Kashmir by the Hindu State. The failure is so severe that no attempt to give hope in the current ruling system is working.

The “New Pakistan” project failed because the current ruling system gives supremacy to the laws made by man, rather than the Law (Shar’a) of Allah (swt) alone. The man-made system has only survived this long because its survival is in the interest of the corrupt within the political and military leadership. The system is an open door for the corrupt to rob the Muslims of the wealth of their land, whether they are politicians, like Zardari, Nawaz or Jehangir Tareen, or military officers, like Musharraf, Kayani and Asim Bajwa. Thus, the corrupt compete with each other for a chance to take the reins of the system, making deals and taking turns to loot the country with both hands. They swarm around the system, jumping from one ship to another depending on the change of the political tides, so that they can have another chance to fill their bottomless bellies.

It is clear to the corrupt in Pakistan’s political and military elite that the people have realized that the ruling system itself has failed. However, their limitless greed compels them to fool the Muslims with yet another project to ensure the survival of the failed system. Thus, the paid mouthpieces of the various factions are now flooding society with worthless talk of civilian supremacy, military supremacy, presidential system, parliamentary democracy, a council of elders and hybrid regimes, in a cheap clash over power, which will yield nothing of goodness, prosperity or dignity for the Muslims.

In the Noble Quran, in which there is no doubt, upon which falsehood cannot approach from either before or behind it, Allah (swt) warned us that turning away from His Guidance guarantees hardship. Allah (swt) said, وَمَنْ أَعْرَضَ عَن ذِكْرِي فَإِنَّ لَهُ مَعِيشَةً ضَنكًا وَنَحْشُرُهُ يَوْمَ الْقِيَامَةِ أَعْمَىٰ “And whoever turns away from My remembrance – indeed, he will have hardship, and We will gather him on the Day of Resurrection blind.” [Surah Taha 20:124]. Certainly, all projects in this man-made ruling system will fail us.

The universal and timeless Word of Allah (swt) has been borne true in our recent practical experience. We escaped from the Musharraf-Aziz project to the Kayani-Zardari project. Then to escape the Kayani-Zardari project, we fled to the Raheel-Nawaz project. Then to flee from the Raheel-Nawaz project, we sought refuge in the Bajwa-Imran project. However, in all cases we simply escaped the affliction of the man-made system, by seeking refuge in the same man-made system! We repeatedly expected goodness by following the ones who disregard the truthful guidance of Allah (swt), even though Allah (swt) said, قُلِ اللَّهُ يَهْدِي لِلْحَقِّ أَفَمَن يَهْدِي إِلَى الْحَقِّ أَحَقُّ أَن يُتَّبَعَ أَمَّن لَّا يَهِدِّي إِلَّا أَن يُهْدَىٰ فَمَا لَكُمْ كَيْفَ تَحْكُمُونَ “Say: ‘It is Allah Who guides to the truth. Is then He, Who gives guidance to the truth, more worthy to be followed, or he who finds not guidance (himself) unless he is guided? Then, what is the matter with you? How judge you?” [Yunus: 35]. Indeed, what is the matter with us if we commit to any new project under this system of falsehood, misguidance and flagrant disregard of the Law of Allah (swt)?

Leave this failed man-made system behind, whilst advancing for the re-establishment of the supremacy of the law of Allah (swt). Allah (swt) said,  إِنِ الْحُكْمُ إِلَّا لِلَّهِ “Legislation is for none but Allah.” [Surah Yusuf 13:40] It is the Khilafah (Caliphate) on the Method of the Prophethood that will ensure that every single article of our constitution and every law that is implemented over us, is derived from the Noble Quran and Blessed Sunnah.

The Law of Allah (swt) made us a single Ummah, regardless of tribe and race and it is the Khilafah that will work to unify the Muslim Lands as a single state, with a single ruler. The Law of Allah (swt) prohibits alliance with those that fight us and occupy our lands, or aid others in doing so, and it is the Khilafah that will end the destructive alliance with the US and adopt a war footing against the Hindu State and the Jewish entity.

There is only one project and system that ensures refuge from the man-made system of force, corruption and neglect and its endless projects. Our new project must be Hizb ut Tahrir and our new ruling system must be the Khilafah. Ahmed narrated that RasulAllah ﷺ said, «ثُمَّ تَكُونُ مُلْكًا جَبْرِيَّةً فَتَكُونُ مَا شَاءَ اللَّهُ أَنْ تَكُونَ ثُمَّ يَرْفَعُهَا إِذَا شَاءَ أَنْ يَرْفَعَهَا ثُمَّ تَكُونُ خِلَافَةً عَلَى مِنْهَاجِ النُّبُوَّةِ ثُمَّ سَكَتَ» “Then there will be rule of force, and it will remain as long as Allah will it to remain. Then Allah will end it when He wills. Then there will be a Khilafah (Caliphate) on the Method of Prophethood.” Then he fell silent. [Ahmed]

Do not allow the prestige of our noble armed forces to be spoiled by support of the corrupt in your leadership for the failed man-made system. You are the blessed ones that Allah (swt) granted power and strength that you must deploy now to grant relief for our good people. Indeed, RasulAllah ﷺ established the supremacy for the Law of Allah (swt) in Madinah by securing Nussrah (Material Support) from your predecessors in war, fire and steel, the fighting men of the Ansaar. Today, it is upon you now to grant your Nussrah to Hizb ut Tahrir for the restoration of the Khilafah (Caliphate) on the Method of Prophethood, earning the pleasure of Allah (swt) and averting His punishment upon you. RasulAllah ﷺ said,«إنَّ النَّاسَ إَذا رَأوُا الظَّالِمَ فَلمْ يَأْخُذُوا عَلى يَدَيْهِ أوْشَكَ أن يَعُمَّهُمُ اللَّهُ بعِقَاب»  “If the people witness an oppressor and they do not take him by his hands (to prevent him) then they are close to Allah covering them all with punishment.” [Abu Dawud, Tirmidhi, ibn Majah].