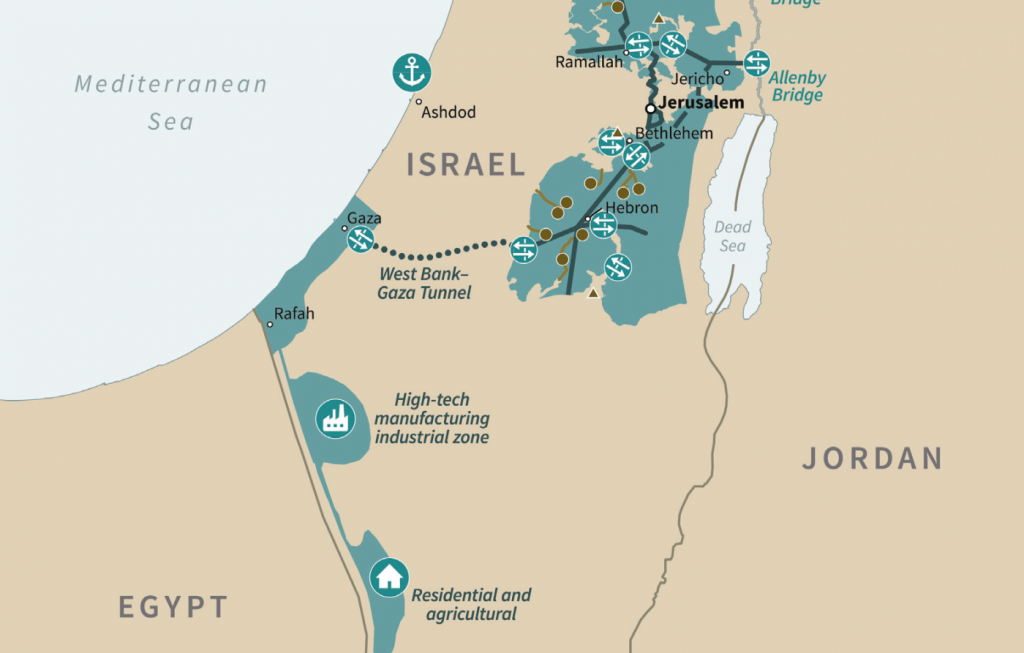 Your Enemy, Trump, Has Bared His Teeth, So Shatter Them with Your Swords.

This night, at a meeting between Trump and Netanyahu in Washington, Trump unleashed all his hostility against Muslims and Palestine’s Quds, to applause from Netanyahu, supporters and followers… Trump announced that he has prepared a deal that treats Jews and Palestinians with justice! It was as if he were saying: ‘All of Palestine is for the Jews, whilst nothing of Palestine is for the people of Palestine. All of Al-Quds, the settlements, Nablus and its surroundings, the Jordan Valley and its peripheries, are for the Jews, whilst the rest is up for negotiation, between Palestinians and Jews.’ As if there is anything left for negotiation! And Trump said that this is the first opportunity in seventy years for Palestinians to obtain a state in Palestine! He added that he met with fifty-five rulers of the Muslim World in Saudi Arabia, during the early days of his term, who were receptive to him! Then he promised fifty billion dollars in financial aid for the Palestinians, upon executing his deal! And then he uttered with his tongue that the Khilafah is dead, may Allah (swt) cause the death of his tongue.

The speech ceremony in which Trump unveiled his deal, and the sickening words which he uttered within it, exposed him as a Jew usurping Palestine, more than the Jews themselves. He would not have dared to utter such, had it not been for the treachery of the rulers in Muslim Lands against their Deen, their Ummah and their lands! Trump acts as if Palestine is his personal property to distribute as he wishes, whilst the rulers are deaf, dumb and blind, without understanding. Worse, some of them even attended this disastrous ceremony! Indeed, Trump was not only satisfied that they would not object, but that they would be happy! Here, he over-estimated… Trump evaluates matters based on what he sees of these subservient rulers, as if the world rests on their crooked thrones, with them lasting forever, glorifying and praising him, such that Palestine and its Quds would remain at his disposal, so as to make a deal with his heresy, or sell with his dollars! It’s better for the Muslims that these rulers remain as they are, for the times are changing. And perhaps Trump will come to know that just as Al-Quds had been violated for years by the Crusaders, before Salahudin purified it of them, Muslims are never without the Salah (Upright) ones, by the permission of Allah (swt), who will achieve the glad tidings of RasulAllah ﷺ with their limbs, with the elimination of the entity of the Jews and the fleeing of those who support them into their sanctuaries, if there remains any sanctuary for them.

As for the Khilafah, which Trump claims is dead, he deceives himself, when there is no doubt that he knows it was not the Khilafah that RasulAllah ﷺ gave glad tiding of… Moreover, inshaaAllah, the Khilafah will soon arise by the limbs of men, just as RasulAllah’s ﷺ glad tiding of the Conquest of Constantinople was achieved by the limbs of Muhammad al-Fatih and his troops. And just as RasulAllah’s ﷺ glad tiding of the fighting of the Jews will also be achieved  by the limbs of the soldiers of Islam, as mentioned in Sahih Muslim, on the authority of Abu Huraira (ra), that RasulAllah ﷺ said, «لَا تَقُومُ السَّاعَةُ حَتَّى يُقَاتِلَ الْمُسْلِمُونَ الْيَهُودَ فَيَقْتُلُهم الْمُسْلِمُونَ» “The last hour would not come unless the Muslims will fight against the Jews and the Muslims would kill them,” to be followed by the elimination of their entity that usurps Palestine, the purification of the Blessed Land of their filth and its restoration to the Abode of Islam (Dar ul Islam), for the Islamic Ummah is an alert nation that does not sleep whilst faced with injustice. If Trump, his follower, Netanyahu, and supporters assumed that this matter will not come to pass, the current Muslim rulers would remain and the Khilafah would not return, then it is just your assumption which will ruin you, by the permission of Allah (swt), وَذَلِكُمْ ظَنُّكُمُ الَّذِي ظَنَنْتُمْ بِرَبِّكُمْ أَرْدَاكُمْ فَأَصْبَحْتُمْ مِنَ الْخَاسِرِينَ “And that was your assumption which you assumed about your Lord. It has brought you to ruin, and you have become among the losers.” [Surah Fussilat 41:23]. And perhaps Trump will see the Khalifah of Islam and Muslims before end of his term, when the terror of the army of Muslims would kill him, before he enters into battle with them, وَلَتَعْلَمُنَّ نَبَأَهُ بَعْدَ حِينٍ “And you will surely know [the truth of] its information after a time.” [Surah Saad 38:88]

O Muslims! O Army of Muslims! Trump has bared his teeth, making his criminal deal to support the Jewish entity and consolidate its hold over all of Palestine… This criminality must be responded to, by the shattering of the Trump’s teeth, by the elimination of the monstrous Jewish entity, restoring all of Palestine to the lands of Islam… Hence, the response against Trump’s deal must not be by the way of the current rulers. Similarly, the response against Trump’s deal must not suffice with resistance in the West Bank and the Gaza Strip alone, no matter how strong. Saying that Palestine is the issue of Palestinians alone is what led to Palestine being lost at the hands of its people, moreover, it is the issue of all the Arabs and by the Shar’iah, all the Muslims… Similarly, the response must not be by chanting alone, no matter how fervent, as the chanting of Muslims is for soldiers marching forth for Jihad, where the chanting is to encourage and praise them… Accordingly, all such response will not eliminate the Jewish entity, so, there will be no response that cuts the root of the crime. Instead, the response must be from the states who move their armies to uproot the Jewish entity, as the Jews have usurped Palestine and have created a state for them, supported by the collaboration and betrayal of the rulers in the Muslim lands. Hence it will be uprooted only by the state which mobilizes an army to defeat and uproot it… So, the response should be either, or both, of the following two matters:

Firstly: The serious and diligent pursuit of the work to restore the Islamic way of life, by establishing the Khilafah (Caliphate) that will move the army of Muslims to fight Jews and eliminate their entity, restoring all of Palestine to the lands of Islam.

As for the second matter, this is in our reality today, when there is no Khilafah. Fighting the Kuffar, particularly the one who occupies our land, does not cease, whether the Khilafah exists, or not. Moreover, fighting the Kuffar is Obligatory, whether the ruler of Muslims is the Khalifah, or the ruler of Muslims does not rule by Islam. Therefore, it is obligatory upon the Muslim armies to mobilize in fighting the Jews, eliminating their monstrous entity and restoring Palestine to the lands of Islam. If the ruler agrees to move the army, then he would have acted in the right way. If he attempted to prevent the army from fighting, standing in its way, let there be a Salahudin from the army, who tramples the ruler under his feet, mobilizing the army to purify the blessed land from the filth of the Jews, just as Salahudin previously purified it from the filth of the Crusaders…

This must be the response. This is the clear path for whoever is angered or outraged by Trump’s deal, or indignant at the Jewish entity, wanting to eliminate their entity and restore Palestine to the lands of Islam. So let him adhere to this path strictly, with diligent action, in truthfulness and sincerity, depending upon Allah (swt), who is the Powerful, the Exalted in Might, لِمِثْلِ هَذَا فَلْيَعْمَلِ الْعَامِلُونَ “For the like of this let the workers [on earth] work.” [Surah as-Saffar 37:61]

In conclusion, Hizb ut Tahrir has clarified to you how the response to Trump’s hopeless deal must be, by the permission of Allah (swt). Thus, the Hizb calls the Muslims and armies of the Muslims:

As for Muslims, we are calling you to take what we have mentioned above seriously, working with us, with seriousness and diligence, truthfully and sincerely, to achieve the promise of Allah (swt) about the Khilafah,  وَعَدَ اللَّهُ الَّذِينَ آمَنُوا مِنْكُمْ وَعَمِلُوا الصَّالِحَاتِ لَيَسْتَخْلِفَنَّهُمْ فِي الْأَرْضِ“Allah has promised those who have believed among you and done righteous deeds that He will surely grant them succession [to authority] upon the earth” [Surah an-Nur 24:55] and to achieve the glad tiding of RasulAllah ﷺ, the return of the Righteous Khilafah, after the oppressive rule in which we are in now, as reported by Ahmed in his Musnad from Hudaifah (ra) that RasuAllah ﷺ said, «ثُمَّ تَكُونُ مُلْكاً جَبْرِيَّةً فَتَكُونُ مَا شَاءَ اللَّهُ أَنْ تَكُونَ ثُمَّ يَرْفَعُهَا إِذَا شَاءَ أَنْ يَرْفَعَهَا ثُمَّ تَكُونُ خِلَافَةً عَلَى مِنْهَاجِ النُّبُوَّةِ» “And then there will be an oppressive rule and it will continue as long as Allah wills it to continue. And then He will remove it when He intends to remove it. Then there will be the Khilafah (Caliphate) upon the Method of the Prophethood.”

As for the armies of Muslims, we call you to tie what we have mentioned above to the top of your spears. Accordingly, we demand your Nussrah (support) to change the installed regimes in the lands of Muslims, to establish the Khilafah Rashidah State (rightly guided Caliphate) upon the Method of the Prophethood, so as to restore the glory of Muslims, their power and the safeguarding of their lands… So, be like the Ansaar who supported Allah (swt) and His Messenger ﷺ, such that Allah (swt) praised them in His verses and the angels rushed to the funeral of their master, Sa’ad bin Muadh with whom Allah was pleased with and pleased him during his death… It was reported by Tirmidhi from Anas bin Malik (ra) that RasulAllah ﷺ said about the funeral of Sa’ad bin Muadh (ra), «إِنَّ الْمَلَائِكَةَ كَانَتْ تَحْمِلُهُ» “Verily, Angels are carrying him.” Blessed are the Ansaar and those who follow their path, may Allah (swt) be pleased with them and please them.

“This [Qur’an] is notification for the people that they may be warned thereby and that they may know that He is but one God and that those of understanding will be reminded.” [Surah Ibrahim 14:52]