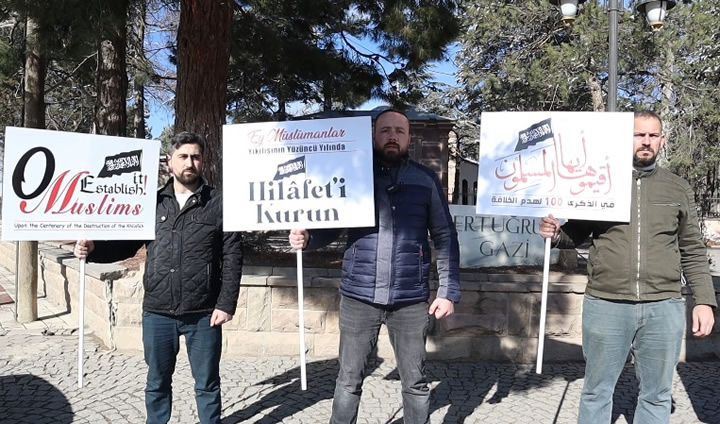 After the abolition of the Khilafah (Caliphate) on 3rd of March 1924 CE, the Islamic Ummah was subjected to attacks and atrocities that were not witnessed in history until now. The Islamic cities were occupied, the wealth of Muslims was plundered, their glory and honour were trampled on, and their unity was shattered. Leaving them without Junnah (shield) and protection. This was the case when Hizb ut Tahrir was established in 1953 CE to restore the Khilafah, which would save the Islamic Ummah from this state that it fell into and make the Deen of Allah (swt) dominate the earth. Today, Hizb ut Tahrir is a global political party based on the ideology of Islam, operating in nearly 50 countries around the world, moving towards its goal, adhering to the orders of Allah (swt) and the Sunnah of His Messenger (saw) in order to establish the Khilafah Rashidah (rightly guided Caliphate) and bring Islam in ruling of life once again.

Hizb ut Tahrir has completed all its preparations to follow this path. It prepared an Islamic constitution ready from all aspects, based on the Islamic creed and deduced from the Qur’an and Sunnah, consisting of 191 articles. In this constitution, the rulings have been drawn up addressing all matters from governance to the economic system, from education to social life, and from domestic policy to foreign policy, with their Shariah evidences.

Hizb ut Tahrir is a sincere leadership that does not lie to its Ummah, and it represents the Ummah’s expectations in the best way. The party has shown the Islamic Ummah that 100 years of longing will be fulfilled. As the rising trend and the only viable cure in the world is the Khilafah Rashidah. This project is the state of the Khilafah Rashidah on the method of Prophethood, which will be established on the basis of the Islamic creed, and will implement the correct Islamic system, and will carry the Deen of Allah (swt) as light and guidance to the whole world, and will bring Muslims out of darkness into light, from humiliation to glory, and from poverty to blessings, and from injustice to mercy. This is not a dream; and not utopian fiction, on the contrary, it is the promise of Allah (swt), and the glad tidings of His Messenger (saw), the fruit of an enlightened mind, insight, wisdom, astuteness, and is the shining star of the political future.

O Muslims: Hizb ut Tahrir invites you to work with it – as the engineer and leader of this project – in order to establish the Khilafah Rashidah on the method of prophethood and to resume Islamic way of life anew. So, roll up your sleeves and work day and night, by standing by Hizb ut Tahrir in establishing the Khilafah Rashidah! And take our side to change and change by Islam.

O people of power and protection: We invite you to give Nusra (support) to Hizb ut Tahrir for the sake of establishing the Khilafah Rashidah. Hizb ut Tahrir invites you to be partners of this great good! So come, let Allah (swt) be your reference, not NATO! Let your leader be the Prophet (saw) and not the enemy of Islam, America and Britain. Will you not launch a campaign to all the countries on which the sun of Islam has shone, for the sake of Allah (swt), in order to restore Islam in power, and to lift oppression from all the oppressed? Will you not answer this call, which will give you strength, protection, pride and honour again?