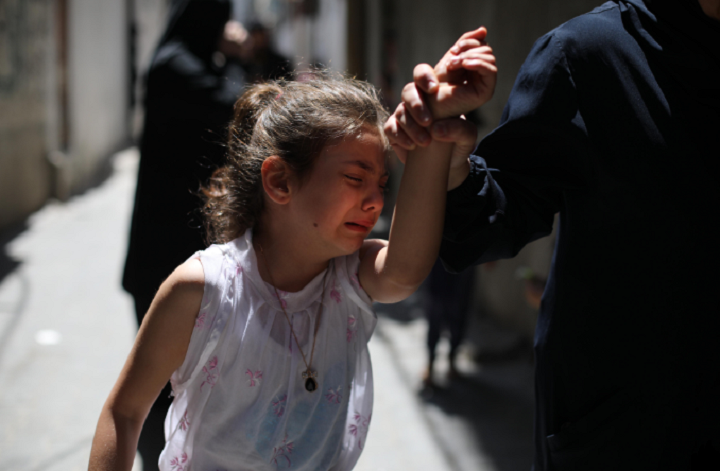 The Jews have been bombing Gaza since Friday, 05/08/2022, in full view of the world. They are killing its people and destroying its buildings. And the army of Egypt al-Kinana is fast asleep in its barracks, while yesterday it was at the height of its activity, launching military operation after operation in Sinai, which is on the Gaza border!

And as the Noble Qur’an described them, and the events witnessed against them, the Jews are a cowardly people, and had they not believed that the Egyptian President Al-Sisi, who is called the “Supreme Commander of the Armed Forces,” would not give his orders to move the Kinana army, they would not have dared to approach Gaza. But if in his veins ran the blood of protective watchfulness for Muslims, there would be no Jews left in the whole Blessed Land, however he is busy spending the wealth of Egypt on building his palaces in the new administrative capital, transporting the coffins of the Pharaohs, and suppressing the people if they account him.

As for Erdogan’s Turkey’s army, who launched the Operation Olive Branch in Afrin, it forgot the olives of Gaza, but even forgot all the olives of the Blessed Land and was busy serving America’s interests in Syria, Libya and others.

As for the Army of Jazirat al-Islam’s (Arabian Peninsula), it forgot that the distance between Tabuk Air Base and Gaza is a quarter of the distance between Riyadh and Yemen. Perhaps the destruction of Yemen, as America requested, is higher (in importance) than the destruction of the Jews! As for the crown prince of the Al Saud ruling family, he betrayed Islam when he opened the country to the immoral parties, and even his family was not spared his betrayal when he took their money and gave it to America, and today he is trying to prepare the ground for announcing normalization with the Jews.

O Muslims: The matter is clear and does not need much explanation. The deterrence of the Jews and the liberation of the Blessed Land requires the support of the Muslim armies. Allah says:

“O you who have believed, fight those adjacent to you of the disbelievers and let them find in you harshness. And know that Allah is with the righteous” [At-Tawba: 123].

As for those who oppose, obstruct, or abandon the call of the armies to fight the Jews and liberate the Blessed Land, let them beware of the wrath of Allah (swt), for their condition is the condition of those whom Allah described (in the verse):

“And if Allah had willed, He could have taken vengeance upon them [Himself], but [He ordered armed struggle] to test some of you by means of others. And those who are killed in the cause of Allah – never will He waste their deeds” [Muhammad: 4].

So let them leave these fabrications and beware of Allah’s wrath.

O People of Power and Protection: Allah (swt) creates such events as opportunities for those who are in your place to intervene and support their Deen and save their brothers and sisters. Allah (swt) says: