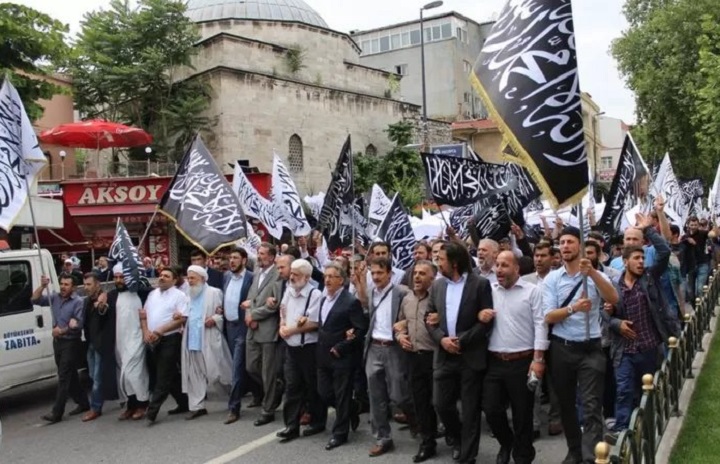 As every year during the month Ramadan, the usurper Jewish entity kills our Palestinian brothers and sisters, messes up Masjid al-Aqsa with its boots, assaults the elderly, humiliates the women and arrests the youngsters. In the face of all that has happened, the rulers, who fell silent and almost couldn’t even make a statement of condemnation because they have normalized with “Israel”, remained sitting in their seats. The commanders who were unresponsive to these acts of terrorism of this entity, who would drown even if Muslims spit together, were grounded in their barracks. While the rulers acted in this way, Hizb ut Tahrir / Wilayah Turkey- called Muslims to the squares during the last week of Ramadan. Press releases and prayers were held in 21 different cities, by saying “We Curse Israel, We Unite in Prayers.” In squares and mosques, our hearts beat with Al-Quds. A press release and prayers were held in front of the Istanbul consulate of the occupying entity “Israel”. Again, in Adana, Adiyaman, Ankara and Antalya in Bursa, Diyarbakir, Ergani and Erzurum in Gaziantep, Hatay and Arnavutkoy in Kahramanmaras, Konya, Mersin and Siirt, in Siverek, Tatvan, Van and Yalova, we said “Hands in the Sky, Armies to Al-Quds”.

Most of these deeds were performed on Laylat al-Qadr. A great number of Muslims participated in the Qunoot deed we performed in Sanliurfa and said Ameen to the prayers accompanied with tawhid and takbirat. The flag of Tawhid carried by Muslims of Sanliurfa during this Qunoot deed, mobilized a handful of Kemalists and some secular media outlets. They spilled out hatred against the flag of Tawhid and pointed the finger at Hizb ut Tahrir. The secular nationalist Yenicag Newspaper captioned “This is Turkey; The Flag of Tawhid Was Raised, Call for Sharia Was Made”. Secular Oda TV and Tele1 TV News websites also made news by saying “They raised flags and made a call for sharia”. After that, the Governorship of Sanliurfa considered necessary to make a statement upon this news and announced that an investigation was started regarding this incident.

Indeed, secular Kemalists said we made a call for Khilafah. We made a call for Khilafah, because Al-Quds can only be freed through Khilafah and because Al-Quds can only be freed by the mobilization of the armies. We understand Kemalists’ anger, and we also understand the fact that the secular media uses provocative language and points the finger because they are hostile towards Islam and Allah’s word. They even do not afford the mass iftar of university students, let alone tolerating the flag of Tawhid. They even show hostility to any symbol belonging to Islam.

What we do not accept is the attitude of the Governorship of Sanliurfa that submitted to the pressures because of the news made by some secular media in a country where 99% is Muslim, and made a statement saying “A research is started into those who carried the flag of Tawhid”. What we do not accept is the lameness of conservative media, Yeni Safak Newspaper, that brought the governorship’s statement to its headline, out of worry that the news of some media outlets would bring harm to AK Party. If the Turkish government had not experienced a normalization process with the Jewish entity, it would have exploited the actions of that entity in Masjid al-Aqsa and directed the Turkish public opinion. Then, neither the governorship would need to make a statement, nor could the pro-government newspaper make news. But the AK Party government and President Erdogan have recently taken relations with the Jewish entity to such a level that this entity, which he previously called a “state of terror”, is now “a legitimate state whose membership is accepted by the UN and recognized by Turkey”. The case of Al-Quds went so far as to say friendship with “Israel” is different. These words of the President encouraged secular Kemalists and paved the way for them to express their anger towards the flag of Tawhid. These secular Kemalists, who got life sentence in the Gezi case due to the political conflicts in Turkey, try to wreak their anger on Muslims and the flag of Tawhid.

It is necessary to ask the governorship, which has launched an investigation into the Muslims of Sanliurfa whose hearts beat with Al-Quds; who gets annoyed of the flag of Tawhid and why? We are not going to sacrifice the flag of Tawhid to the anger of a handful secular Kemalists, because Sanliurfa and all the Turkish people dote on the flag on which اللهْ الرَّسُولُ مُحَمَّدُ اللهْ اِلَّا اِلَهَ لَا is written, because this flag is the flag of Islam and Prophet Muhammad (saw). Cursing “Israel” is not a crime while Masjid al-Aqsa is messed up with the dirty boots of the invaders and while our brothers and sisters are killed. The real crime is normalizing with this occupying entity.