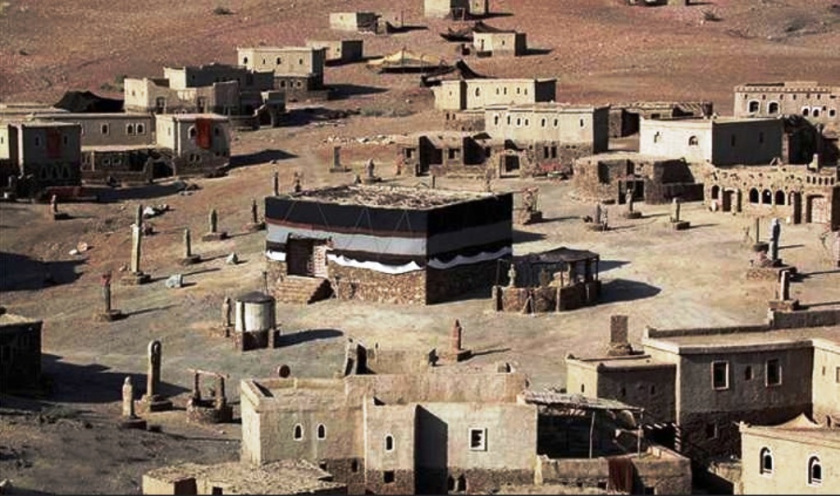 The first moment of this Message meant tireless struggle for this Deen. Allah (swt) revealed regarding Sayyedena Muhammad ﷺ, يَا أَيُّهَا الْمُدَّثِّرُ * قُمْ فَأَنذِرْ “O you [Muhammad] enveloped (in garments)! Arise and warn.” [74:1-2]. With this verse, revelation became a Message. “Arise and warn!” means to prepare to go forth with zeal and warn the people. So, with this verse, Muhammad ﷺ became RasulAlllah ﷺ, just as he attained Nabuwwah (Prophethood) with the first Revelation. He ﷺ, alone, must now carry this Message to the people who have not heard of it before and are steeped in ignorance. When the Mother of the Believers, Khadija Bint Khuwaylid (ra), saw her husband burdened with the huge responsibility to convey the Message of Islam, she tried to console him by saying, اِرتحْ “Rest easy.” However, deeply aware of the mammoth task ahead, he ﷺ replied, «لا راحةَ بعدَ اليومَ يا خديجة» “There is no rest after today, O Khadija.”

Sadaqa RasulAllah ﷺ, indeed, he spoke the truth. RasulAllah ﷺ rose, as commanded, to his feet and measured up to the new task. There was no rest for him, our most beloved. It had been decided by the Lord of the World’s (swt) that he would have to shoulder this burden of all burdens. Sleep, comfort, cool shade in the summer or warm beds in winter became items that were now alien in his life. RasulAllah ﷺ arose quickly for the strife awaiting him. Grave responsibility had fallen upon his most beautiful of all beings, driving him into the turmoil of life to raise the word of Allah as the highest. RasulAllah ﷺ went ahead in a spirit of complete selflessness, relentlessly striving and never relaxing in carrying the burden of the great Trust. He ﷺ shouldered the burden of enlightening mankind and the heavy weight of over twenty years of striving, nothing distracting his attention from this mission.

No rest at a time when over the age of forty, men would think about settling in their business and households. Whilst others would rest in the company of their wives, RasulAllah ﷺ left the Mother of the Believers, Khaldija (ra), to face hardship and rejection when he called upon the tribes with the Message of Islam. When other men found relief in the delightful antics of their young children, RasulAllah ﷺ would spend hours discussing and teaching the handful of new Muslims so that they would meld with Islam. No rest at the age of fifty, when men focus upon the marriage and means of earning livelihood of their children, for Allah (swt) had chosen that Islam was to be established as a state and there would be no rest for him ﷺ as a ruler, inviter of nations to Islam and the Faatih (Opener) of lands. And no rest at over sixty, when men retire to tend gardens and plan the lives of their grandchildren, he ﷺ would stand tall to invoke the people.

Indeed, we witness this even as his death approached him. Recall his last days, O brothers, when other men would resign to rest amongst their loved ones, cherishing their company in their last moments, RasulAllah ﷺ strove with every fiber in his aged, ill and dying body. On Monday the twenty-ninth of Safar in the eleventh year of Al-Hijra, he participated in funeral rites in Al-Baqee‘. On the way back he had a headache and his temperature rose so high that the heat effect could be felt over his headband. On Wednesday, five days before he died the temperature of RasulAllah ﷺ rose very high due to the severity of his disease. RasulAllah ﷺ fainted and suffered from pain. Even then, there was no rest for RasulAllah ﷺ. RasulAllah ﷺ commanded, «صُبُّوا عَلَيَّ سَبْعَ قِرَبٍ مِنْ سَبْعِ آبَارٍ شَتَّى حَتَّى أَخْرُجَ إِلَى النَّاسِ فَأَعْهَدَ إِلَيْهِمْ» “Pour out on me seven Qirab (water skin pots) of various water wells so that I may go out to meet people and talk to them.” So they seated him in a container (usually used for washing) and poured out water on him until he said, «حَسْبُكُمْ، حَسْبُكُمْ» “That is enough. That is enough.” Then he felt well enough to enter the Mosque. He entered it band-headed, sat on the pulpit and made a speech to the people who were gathering together around him. He said, «لَعَنَ اللَّهُ الْيَهُودَ اتَّخَذُوا قُبُورَ أَنْبِيَائِهِمْ مَسَاجِدَ» “The curse of Allah falls upon the Jews and Christians for they have made their Prophets’ tombs places of worship.” Then RasulAllah ﷺ said, «لَا تَتَّخِذُوا قَبْرِي وَثَنًا يُعْبَدُ» “Do not make my tomb a worshipped idol.” Then he offered himself and invited the people to repay any injuries he might have inflicted on them, saying, «فمَن كُنْتُ جلَدْتُ له ظَهرًا فهذا ظَهري فلْيستقِدْ منه ومَن كُنْتُ شتَمْتُ له عِرضًا فهذا عِرضي فلْيستقِدْ منه» n“He whom I have ever lashed his back, I offer him my back so that he may avenge himself on me. He whom I have ever blasphemed his honour, here I am offering my honour so that he may avenge himself.”

Remember, O brothers, the description of Hind bin Abi Halah, “The Messenger of Allah ﷺ was continually sad, thinking perpetually. He had no rest (i.e. for long).” No rest for RasulAllah ﷺ. It was in his eyes, thinking about the affairs of the Ummah, constantly searching for the best for it. It was in his pace and in the urgency of his movement, restless to complete the good actions and taste the sweetness of the Victory of Allah (swt). It was in the vigor of his individual ibaadah, when his legs would swell through standing in Qiyyam ul-Layl and when asked about it, he replied, «أَفَلَا أَكُونُ عَبْدًا شَكُورًا» “Should a servant not be grateful?” And it was in the seriousness and warmth of his speech, invoking others from their slumber, reviving the tired and creating restlessness in the satisfied to strive for more and more.

The fuel for this activity and urgency was from the Light that is inextinguishable, perfect, free from adulteration, the Nur (Light) of Revelation and the promises that it contains of pleasure of Allah Ar-Rahmaan, Ar-Raheem, His Jannah and the assurance of unparalleled rest in a life that knows no end, no death, no pain, no illness, no trial and no tribulation. Reflect upon the beautiful Ayaat, dear brothers, reflect upon them so the rust is lifted from our hearts and they bur brightly. Allah (swt) said, أَمْ حَسِبْتُمْ أَنْ تَدْخُلُوا الْجَنَّةَ وَلَمَّا يَأْتِكُمْ مَثَلُ الَّذِينَ خَلَوْا مِنْ قَبْلِكُمْ مَسَّتْهُمْ الْبَأْسَاءُ وَالضَّرَّاءُ وَزُلْزِلُوا حَتَّى يَقُولَ الرَّسُولُ وَالَّذِينَ آمَنُوا مَعَهُ مَتَى نَصْرُ اللَّهِ أَلاَ إِنَّ نَصْرَ اللَّهِ قَرِيبٌ “Or think you that you will enter Paradise without such (trials) as came to those who passed away before you? They were afflicted with severe poverty and ailments and were so shaken that even the Messenger and those who believed along with him said, “When (will come) the Help of Allah?” Yes! Certainly, the Help of Allah is near!” [Surah Al-Baqarah 2:214]. Allah (swt) said, وَلَنَبْلُوَنَّكُم بِشَيْءٍ مِّنَ الْخَوْفِ وَالْجُوعِ وَنَقْصٍ مِّنَ الْأَمْوَالِ وَالْأَنفُسِ وَالثَّمَرَاتِ وَبَشِّرِ الصَّابِرِينَ “And certainly, We shall test you with something of fear, hunger, loss of wealth, lives and fruits, but give glad tidings to As-Sabirin (the patient ones.).” [Surah Al-Baqarah 2:155]. Allah (swt) said, لَتُبْلَوُنَّ فِي أَمْوَالِكُمْ وَأَنْفُسِكُمْ وَلَتَسْمَعُنَّ مِنْ الَّذِينَ أُوتُوا الْكِتَابَ مِنْ قَبْلِكُمْ وَمِنْ الَّذِينَ أَشْرَكُوا أَذًى كَثِيرًا وَإِنْ تَصْبِرُوا وَتَتَّقُوا فَإِنَّ ذَلِكَ مِنْ عَزْمِ الأُمُورِ “You shall certainly be tried and tested in your wealth and properties and in your personal selves, and you shall certainly hear much that will grieve you from those who received the Scripture before you (Jews and Christians) and from those who ascribe partners to Allah, but if you persevere patiently, and become Al-Muttaqun (the pious) then verily, that will be a determining factor in all affairs, and that is from the great matters.” [Surah Aali ‘Imraan 3:186]

So, it is little wonder that such a man, beloved of all beloved, RasulAllah ﷺ, inspired by such a Deen and the promise it contained, radiated a tireless energy in all those around him, igniting their hearts and minds in the singular, single-minded pursuit of the pleasure of Allah (swt). Remember, the striving for Islam as a state. Remember, Mus’ab (ra) leaving the life of luxury and the love of a wealthy mother to strive in carrying the Deen and being honored with the establishment of Islam as a state. Remember the striving to expand the state. Remember, Hanzala (ra), the martyr who left the lap of his new wife for the sake of Jihad and who earned the honor of his body being washed by the angels in preparation for Jannah. And remember the preservation of that state. Remember, Ammaar bin Yassir (ra), at the age of ninety-three, yes brothers, ninety-three, abandoning his grandchildren and perhaps their children too, striding to the Battle of Siffeen, lighting the way for others in the time of Fitna. No rest for RasulAllah ﷺ, or his Companions (ra), except the eternal rest of Firdaus!

O brothers! O those who desire the sweet companionship of RasulAllah ﷺ in the Next Life, the life with no end! O those who wish to be the foremost of the foremost! O those who wish to be raised as martyrs! Carry this Deen tirelessly, so you deserve such a companionship and such rewards. Join your nights with your days, let not even minutes pass let alone hours, sleep only to replenish a need, turn your faces away from the luxuries of life so that you can face your Lord with beaming faces. Strive so that your efforts are added to the material means, strive so that Allah (swt) is pleased with us, and multiplies those efforts in rewards and results. No rest for us, no rest for us, until the eternal rest of the Aakhira.