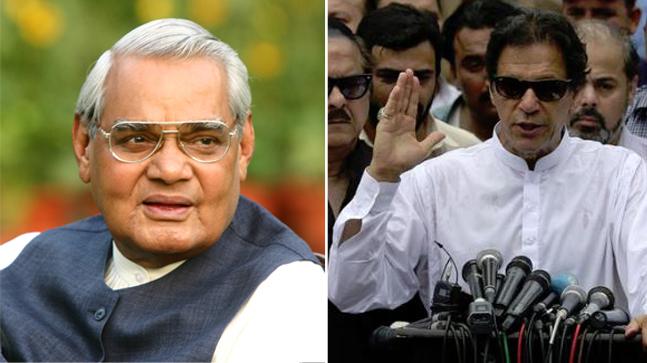 On 16th of August 2018, Imran Khan, who became Prime Minister of Pakistan on 18th August 2018, offered his condolence over the demise of former Indian Prime Minister Atal Bihari Vajpayee. “We stand with India in this difficult time,” Imran Khan said in a statement. “Vajpayee’s efforts for peace between Pakistan and India will always be remembered,” Khan said, adding, “There is a void in the politics of South Asia after his death. There can be political differences but the desire of peace remains present across the border.” (Times of Islamabad)

Atal Bihari Vajpayee was the leader of Hindu Nationalist Party, Bharatiya Janata Party (BJP), which rose to power in India on its strong anti-Muslim rhetoric. BJP demolished the famous Babri Masjid in Ayodhya, Uttar Pradesh, India. A 2009 report, authored by Justice Manmohan Singh Liberhan, found 68 people to be responsible for the demolition of the Masjid, and Vajpayee was amongst them. It is the same party whose Chief Minister of Gujrat, now the Prime Minister of India, facilitated the slaughter of Muslims in 2002, resulting in the martyrdom of around two thousand Muslims.  Even today, Pakistan witnesses brutal aggression by Indian forces across the Line of Control in Kashmir and the Working Boundary, leading to the martyrdom of innocent civilians and soldiers of Pakistan. According to Pakistan’s foreign office statistics in 2018, the Indian forces have so far carried out more than 1,400 ceasefire violations along the LOC and the Working Boundary, resulting in the martyrdom of 30 innocent civilians, whilst injuring 121 others.

So the new political leadership of Pakistan, Imran Khan, who came into power upon the rhetoric of change, is following exactly the same policy as the previous “corrupt” political leader of Pakistan, Nawaz Sharif, which is to appease India and ensure normalization of relations with it despite its relentless aggression against Pakistan. This is even though Imran Khan targeted Narendra Modi in almost every election meeting to rally support. He pointed to the ‘threat’ of Narendra Modi in Pakistan during the election campaign. He even accused Nawaz Sharif of “protecting India’s interests.”  Imran Khan met Modi once in December 2015 in India and praised Modi on various occasion previously despite knowing his open animosity towards Muslims and Pakistan. Imran Khan said on Sunday, 3rd April 2017, that Narendra Modi is not corrupt. Now despite his previous anti-Indian rhetoric, Imran Khan has made it clear that he will follow the policy of the “corrupt” Nawaz Sharif.

In Democracy, leaders lie to their people, manipulate their sentiments and make false promises just to win elections and become rulers. Once they achieve this goal, they simply follow their whims and desires and the instructions of their colonialist masters, disregarding Islam flagrantly. Like previous regimes, the new regime is going to follow the same policy of normalization of relations with India, as desired by its master, America. Muslims of Pakistan will only see change in policy towards India once a Khilafah (Caliphate) on the method of Prophethood is established in Pakistan as it follows the commands of Allah (swt) only in any field of life including foreign affairs. Allah (swt) said, إِنَّمَا يَنْهَاكُمُ ٱللَّهُ عَنِ ٱلَّذِينَ قَاتَلُوكُمْ فِى ٱلدِّينِ وَأَخْرَجُوكُم مِّن دِيَارِكُمْ وَظَاهَرُواْ عَلَىٰ إِخْرَاجِكُمْ أَن تَوَلَّوْهُمْ وَمَن يَتَوَلَّهُمْ “It is only as regards those who fought against you on account of religion, and have driven you out of your homes, and helped to drive you out, that Allah forbids you to befriend them.” [Surah Al-Mumtahina 60:9]. And He swt said, فَمَنِ ٱعْتَدَىٰ عَلَيْكُمْ فَٱعْتَدُواْ عَلَيْهِ بِمِثْلِ مَا ٱعْتَدَىٰ عَلَيْكُمْ “Then whoever attacked against you, you attacked likewise against him” [Surah Al- Baqarah 2:194]. So the Khilafah state will not have friendly relations with belligerent states like India. Its relations with such states will be based on a war footing. Its armed forces will liberate the Muslims of Occupied Kashmir through Jihad. It will work to restore Islam as the authority over all of the Indian Subcontinent, liberating its oppressed people from the mischief of the Hindu ruling elite decisively.