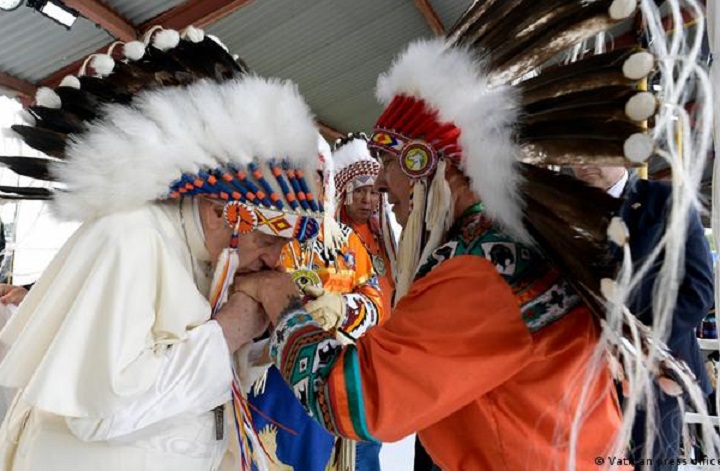 Headlines:
Protests against Pope over 500-year history of Western Imperialism
Bypassing Pakistan Govt and IMF, Bajwa Appeals to US over Funding

Protests against Pope over 500-year history of Western Imperialism

This week, during his visit to Canada, Pope Francis I, head of the Roman Catholic Church, came under pressure for past abuses against Canada’s native indigenous peoples. According to a report at the BBC:

During his trip to Canada, Pope Francis said sorry, he talked about begging for forgiveness. That in itself fulfilled one of the “calls to action” laid out by indigenous people.

But throughout this visit, the Pope faced criticism that he did not do more to fulfil other demands and to take more tangible steps to make amends for the Catholic Church’s role in the oppression, mistreatment and cultural genocide of indigenous people in Canada.

Those demands have long been communicated to the Pope. Among them, reparations and investment, accountability for those who perpetrated abuse at Catholic-run schools, and the return of sacred indigenous artefacts from the Vatican.

“Lives have already been lost. You couldn’t just get over it,” says Edna Elias, who was one of the estimated 150,000 indigenous children taken far from her family to a church-run residential school.

“Sure, apologies were made,” Edna said through tears, “that’s fine. But those are words.”

However, a deeper and much older atrocity was also brought to attention this week as protesters on Thursday unfurled a giant banner as the Pope was conducting a Christian ceremony near Quebec City. The banner read, “Rescind the Doctrine” and referred to the ‘Doctrine of Discovery’ propagated by the Roman Church more than 500 years ago, which provided the legal basis for all non-Christian lands to be usurped by Christian powers. As explained by the Toronto Star:

So what is the Doctrine of Discovery?

It is a legal concept — based on 15th-century papal bulls, or official declarations — that gave the church’s blessing to European explorers “discovering” and exploiting land in the New World and Africa that was already inhabited by non-Christians.

“Basically, it allows for a European nation to lay claim on any territory that the state discovers, as long as it is uninhabited,” said Tamara Pearl, an assistant professor of law at the University of Alberta.
“It began with this concept of terra nullius, which was Latin for ‘deserted’ or ‘uninhabited’ area, but that concept, without any justification, was expanded to mean uninhabited by civilized peoples.”

Indigenous leaders say the doctrine essentially provided the justification for their land to be taken and for treaty obligations to often be disregarded by European settlers.

Lenin, who extended Marx’s decrepit Communist dogma to the international arena, claimed that imperialism was the highest stage of the Capitalist ideology. But, not only is imperialism an intrinsic indivisible component of Capitalism, it in fact predates Capitalism, with roots in the final centuries of Europe’s Christian civilisation. The Star explains further:

Back in the 15th century, the church had a lot more power over European governments, particularly the Catholic ones, as the pope was seen as God’s representative on earth. What the church said formed part of what would have been considered international law at the time.
In 1455, the pope issued a bull that gave Portugal the right to conquer or enslave any pagan lands or peoples, said Pearl, who in addition to being a law professor is also a Nehiyaw iskwew, or Plains Cree woman, from One Arrow First Nation.

Half a century later, Spain wanted in, and the pope at the time issued another bull giving it the right to conquer as well. Over time, these bulls fed the philosophical and legal idea that European nations had a right to non-Christian lands.

When the French and English first showed up in North America, they were relatively respectful of the first Indigenous groups they met — who, at that point, far outnumbered them.

The first agreements they signed, known as the Peace and Friendship Treaties signed with the Mi’kmaq, Maliseet and Passamaquoddy First Nations, were seen by the Europeans as deals between equals.

But as more and more Europeans arrived in North America they started to gain the upper hand, and increasingly disregarded the treaty obligations they had agreed to. The idea that they had a right to these lands was informed by the Doctrine of Discovery.

The idea that Europeans were superior to other groups then paved the way for laws like Canada’s Indian Act, Pearl adds, as well as the residential school system.

The so-called International law today has its roots in the final corrupt centuries of Christian rule, and has been corrupted even further by the Western Capitalist states. It is incumbent upon the Muslim Ummah to oppose imperialist exploitation and restore humanity to the general peace and prosperity that existed in the world before the rise of the West, during the thousand years that Islam was dominant. With the permission of Allah (swt), the Muslim Ummah shall soon re-establish the Islamic Khilafah (Caliphate) State on the method of the Prophet (saw) that shall liberate her occupied territories, reunify her lands, implement the Islamic sharia, restore the Islamic way of life and carry the call for Islam to the entire world. The Khilafah State shall, almost from its inception, join the ranks of the great powers on account of its great size, immense population, vast resources, unparalleled geography and unique Islamic ideology. The Khilafah State shall thus be in a position to reverse corrupt international norms, mistakenly called ‘law’, and re-introduce a more elevated international tradition and custom into world affairs. Christianity no longer dominates world affairs; it has been replaced by Western Capitalism, an ideology that is far worse than Christianity. The Khilafah State must push back the influence of Western Capitalism, and end the wretched imperialism that the West continues to practice by means both overt and covert.

Bypassing Pakistan Govt and IMF, Bajwa Appeals to US over Funding

The Foreign Office (FO) on Friday confirmed that there has been contact between Chief of Army Staff General Qamar Javed Bajwa and US Deputy Secretary of State Wendy Sherman.

At a weekly briefing today, after confirming Gen Bajwa’s contact with the US official, Spokesperson Asim Iftikhar Ahmad said that the FO wasn’t aware if the two officials talked about the economy.

“Our understanding is that ISPR (Inter-Services Public Relations) will be able to comment on it,” he added.
The FO’s statement comes amid reports that the COAS reached out to Washington requesting help in securing an early loan dispersal from the International Monetary Fund (IMF).

According to a report published in Nikkei today, Gen Bajwa spoke on the phone with Sherman.

“The sources, who requested anonymity because they were not authorized to speak publicly, said Bajwa made an appeal for the White House and Treasury Department to push the IMF to immediately supply nearly $1.2 billion that Pakistan is due to receive under a resumed loan program,” it stated.

The present world order is not, as the Westphalian nation-state model would have us believe, a system of about 200 independent countries. In fact, most decisions in the world are dictated by a handful of great powers, of whom the leading state, the United States of America, has the most dominant say. Superficially, the IMF exists to assist national governments with necessary financing.

In reality, the IMF is controlled by the Western powers, foremost of which is the US with the highest voting share and an effective veto power over IMF decisions. The IMF and its sister global institutions were primarily designed by the US to extend and globalise the system of European imperial preference that had excluded America from benefitting from the rich economies of Europe’s colonies.

Like many other non-Western countries, Pakistan needs foreign funding because its economy continues to follow the colonial policy of cheaply exporting resources and manpower while expensively importing finished goods. Pakistan will not escape the colonialist trap until it has a government that rebuilds its economic base on indigenous requirements, most critically heavy industry and military production. That government will be, with the permission of Allah (swt), the Khilafah State.

This week’s news item also highlights that Pakistan’s actual head of state is not the man sitting in the presidency in Islamabad but the head of Pakistan’s armed forces. Anyone sincere for change would realise that the way to establish the Khilafah State runs through the armed forces and not the so-called democratic institutions.