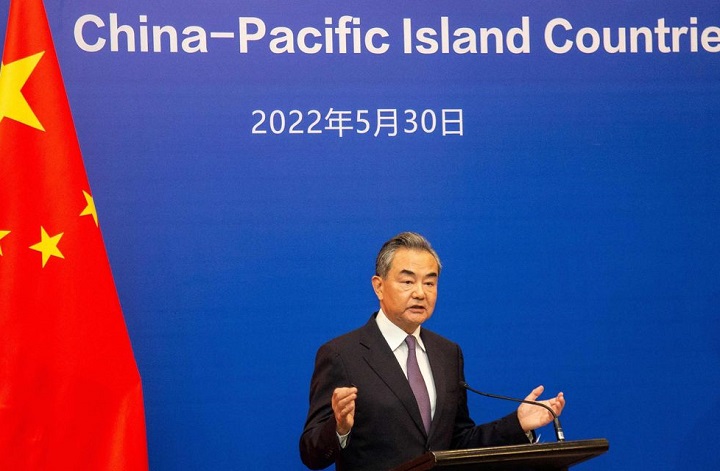 Details:
* New Chinese Initiative to engage with Pacific Island States
* Erdogan under US Pressure to Accept Sweden and Finland in NATO

According to The Guardian:

The leak of a sweeping economic and security pact revealed China is hoping to sign up 10 Pacific countries to a deal that could fundamentally alter the balance of power in a region that spans nearly one-third of the globe. Now Pacific nations are facing a choice that will shape the region for decades to come.

It began with the announcement that the Chinese foreign minister Wang Yi would embark on an “extraordinary and unprecedented” trip around the Pacific from 26 May to 4 June, taking in eight countries in 10 days. Wang touched down in Solomon Islands on Thursday, before moving on to Kiribati and Samoa on Friday; Fiji, Vanuatu, Tonga, Papua New Guinea and Timor-Leste will follow next week.

The tour is preparation for a regional security deal, as The Guardian goes on to explain:

The deal – proposed between China and 10 Pacific countries – covers everything from a free trade area with the region, to providing humanitarian and Covid relief, to sending art troupes to the islands. But most concerning, is the vision it sets out of a much closer relationship on security matters, with China proposing it would be involved in training police, cybersecurity, sensitive marine mapping and gaining greater access to natural resources.

It would mean a significant shift in the regional security order, and places Pacific island countries firmly in the centre of the geopolitical tug-of-war between China and the US and its allies.

So does this mean that these island states have shifted to the Chinese camp? In fact, America has been pursuing a complex strategy of deliberately pushing countries within its own orbit to engage with China. Fiji is an example of this; it is to host the Chinese foreign minister and his regional summit. But at the same time Fiji has chosen to align itself with America. The Guardian notes:

In a move that was touted as significant, it was announced on Friday that Fiji would be joining Joe Biden’s Indo-Pacific Economic Framework (IPEF), the first Pacific island country to do so, as the US seeks to shore up alliances with Pacific nations.

On Thursday, in an important speech, US Secretary of State Anthony Blinken shed some light on the complexities of America’s strategy:

China is the only country with both the intent to reshape the international order and, increasingly, the economic, diplomatic, military, and technological power to do it…
We are not looking for conflict or a new Cold War. To the contrary, we’re determined to avoid both…

But we cannot rely on Beijing to change its trajectory. So we will shape the strategic environment around Beijing to advance our vision for an open, inclusive international system.

China is not a direct threat to America at present. But America cannot tolerate the rise of a country that may be a threat to China in the future. Hence it is fully committed at this time to containing China’s rise. The Westphalian nation-state model that the current world order is supposed to be based on would have us think that the small island states are making their own decisions independently. However, in reality the world is mostly dominated by a few great powers, as it has always been. America, the foremost of these, is using the pretence of Westphalia to deceive China into engaging with countries that actually follow American policy.

With the permission of Allah (swt) the Muslim Ummah shall soon arise and re-establish the Islamic Khilafah (Caliphate) State on the method of the Prophet (saw) that shall unify all Muslim lands, liberate her occupied territories, implement the Islamic shariah, restore the Islamic way of life and carry the light of Islam to the entire world. The Khilafah State shall almost from its renewal, re-join the ranks of the great powers, and work to bring restraint and stability to world affairs by confronting, containing and calming the machinations of the other great powers and returning the world to the state of peace and prosperity that existed during the thousand years that the Khilafah State was previously the world’s leading power.

Erdogan under US Pressure to Accept Sweden and Finland in NATO

After earlier opposing the expansion of NATO to include Sweden and Finland, Turkish President Recep Tayyip Erdogan appears to be succumbing to US pressure to include them. According to Reuters:

Ankara observed a positive attitude towards lifting of an arms exports embargo during talks with delegations from NATO applicants Finland and Sweden, President Tayyip Erdogan’s spokesman said on Wednesday.

“We have seen a positive attitude towards lifting of embargo regarding defence industry products during this meeting, this is a pleasing development,” Ibrahim Kalin said.

Sweden and Finland had banned arms exports to Turkey after its Syria incursion against the Syrian Kurdish YPG militia. Ankara considers the group identical to PKK.
In a news conference following the talks, Kalin also said Turkey’s terrorism concerns and expectations about concrete steps to address them were conveyed to counterparts.

All 30 NATO states must give their approval before a new member can be admitted and thus benefit from the collective-security guarantee.

One of the key objectives of the Ukrainian conflict, for America, is the strengthening of its domination over Europe. The addition of Sweden and Finland into NATO is a great prize for America, which the US requires that Turkey also accept.

Turkey is one of the relatively few large Muslim countries left after the West instigated the division of Muslim lands into more than 50 countries, some of them effectively just city states. But even a country like Turkey finds itself submitting to Western domination because, like all other Muslim countries, it is governed by an agent ruling class that continues to implement Western systems of government and follow Western policy objectives.

With the permission of Allah (swt) the Muslim Ummah shall soon overthrow this entire agent class and install in their place sincere, learned, politically aware, Muslim leaders who will be loyal to Allah (swt) and His Messenger (saw) and put the interests of the Ummah above the interests of others. Such men exist within the Ummah even now but they refuse to participate in the ruling by disbelief and instead work for the pure implementation of Islam. Their support increases amongst the Muslims and amongst the people of power, so it is only a matter of time before the promise of Allah comes to pass. Allah (swt) says in the Noble Qur’an: