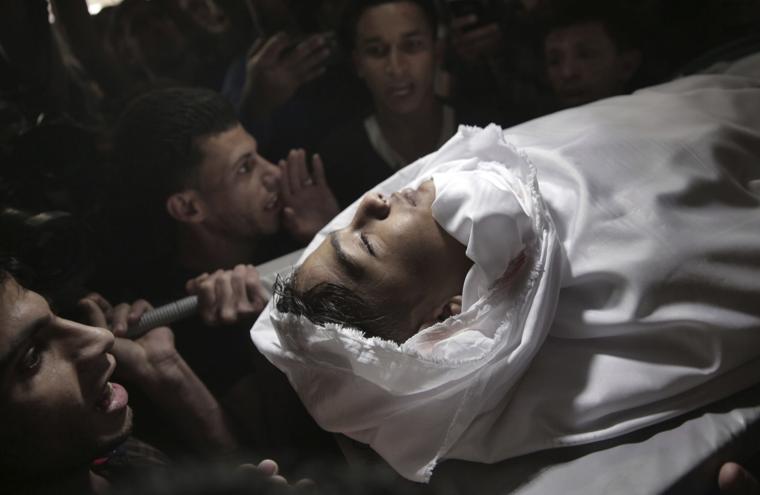 After shocking media images of the massacre by the illegal occupying Jewish State of peaceful demonstrations by Palestinians at the Gaza border fence, Muslim governments have resorted to their standard ploy of calling summit meetings to discuss resolutions and investigations that will lead nowhere. According to an AFP report at the Nation:

The Arab League called Thursday for an international probe into alleged crimes by Israeli forces against Palestinians following mass protests on the Gaza border that saw dozens of demonstrators killed.

Tens of thousands have protested along Gaza’s border with Israel since March 30 calling for Palestinian refugees to be able to return to their homes now inside Israel.

The largest demonstrations coincided with the move of the US embassy in Israel from Tel Aviv to Jerusalem on Monday, which saw Israeli forces kill some 60 Palestinians. “We call for a credible international investigation into the crimes committed by the occupation,” Arab League chief Ahmed Abul Gheit said at an extraordinary meeting of Arab foreign ministers in Cairo on Thursday to discuss the violence.

Turkish President Recep Tayyip Erdogan will on Friday host an emergency summit in Istanbul of the world’s main pan-Islamic body, the Organisation of Islamic Cooperation (OIC), which he said would send a “strong message to the world”.

Erdogan, who also announced plans for a pro-Palestinian rally, has exchanged bitter accusations with Israeli Prime Minister Benjamin Netanyahu, calling Israel an “apartheid state” and ordering the country’s ambassador to Turkey to leave.

The around 60 killed and more than 2000 injured on Monday alone was actually a small number compared to earlier Jewish atrocities, the key difference being that these attacks were easily televised because they were concentrated in a small area, and so it was undeniable just from the footage alone that the Jewish entity was the aggressor. But the reality is that the people of the Blessed Land (Palestine), especially in Gaza, are living in a mass concentration camp that is completely sealed by the illegal occupying Jewish entity, blocking the movement of people and even the provision of essential supplies. This is a day-to-day, year-to-year and decade-to-decade tyranny that far exceeds deaths and injuries at any one time.

The purpose of the decrepit governments who are presently ruling over Muslim lands such as that of Erdogan’s is not to show the world anything but only to try to maintain a façade of action and purpose in front of their own domestic populations. The illegal occupying Jewish entity has no ability to defend itself against Muslims; it is the Muslim governments themselves that guarantee its security as part of the colonial system imposed by the West and maintained by our rulers for their perceived personal benefit.

Allah (swt) has created Hellfire for the people who perpetuate the types of crimes we are seeing committed against Muslims today. Allah (swt) says in the Noble Qur’an:

“But those who disbelieve, for them will be the fire of Hell. Neither will it have a complete killing effect on them so that they die nor shall its torment be lightened for them. Thus do We requite every disbeliever! Therein they will cry: “Our Lord! Bring us out, we shall do righteous good deeds, not (the evil deeds) that we used to do.” (Allaah will reply:) “Did We not give you lives long enough, so that whosoever would receive admonition could receive it? And the warner came to you. So taste you (the evil of your deeds). For the Zaalimoon (polytheists and wrongdoers) there is no helper” [Fatir 35:36-37].

The people of the Blessed Land (Palestine) will undoubtedly get their justice. The question for the rest of the Muslim Ummah, especially in this blessed month of Ramadan, is whether we raise our voices for the oppressed or stand silently with the oppressor. The great scholar, thinker and politician, Sheikh Taqiuddin an-Nabahani (rahimahu Allah) said about the illegal, occupying Jewish entity that it is “the shadow of the Arab regimes, so if a thing ceases to exist then its shadow ceases to exist also”. All those who disbelieving foreigners that illegally occupy Muslim lands today will be soon ejected, with Allah’s permission, when Muslims arise and overthrow the diseased colonialist systems implemented in our lands and reunify under the re-established righteous Islamic Khilafah (Caliphate) State on the method of the Prophet (saw) that will implement the noble Deen and carry its light to the entire world.

In further proof that the judicial system in Malaysia is subservient to its political system, police have immediately begun moving against Najib Razak, after he lost the election last week. According to Reuters:

Malaysian police on Thursday searched ousted Prime Minister Najib Razak’s home and other places linked to him in connection with an investigation into the scandal-plagued state fund 1Malaysia Development Berhad (1MDB).

Police entered Najib’s family home late on Wednesday, an extraordinary scene that thousands watched unfold as it was streamed live. Few would have predicted such a scenario before a May 9 general election that he was expected to win.

This follows the release after full pardon bestowed upon Anwar Ibrahim, the former opposition leader jailed in 2015.

Najib Razak’s crime was that he departed from the British agenda, which continues to control Malaysia behind the scenes. Najib Razak began to reorient Malaysia on the American plan, after the announcement of the ‘Pivot to Asia’ policy by US President Barack Obama, who became the first sitting president to visit Malaysia in almost 50 years.

It was Britain that colonised Malaysian lands, granting ‘independence’ in 1957 only to be able to continue to control Malaysia politically. The re-elected Prime Minister Mahathir Mohamad, aged 92, was brought in to re-establish British control over the country. Although Britain and America share common objectives on a variety of issues, they also maintain pursue diverging agendas in many matters. In particular, Britain jealously guards its interests in its former colonies and cannot tolerate the interference of other powers in those countries. Mahathir had not only been a faithful guardian of British interests in Malaysia, he has also worked actively to reduce US influence in the region as a whole, notably by refusing to attend an APEC summit held in America in 1993.

With Allah’s permission, the sincere indigenous leadership of the re-established righteous Islamic Khilafah (Caliphate) State on the method of the Prophet (saw) will be well-versed in the shared interests and hidden conflicts between Western and other world powers, and will be adept at playing off one against the other to maintain the sovereign integrity of the state for the benefit on Muslims and their Deen.

“With friends like that, who needs enemies.”
That was how Donald Tusk, one of the European Union’s top officials, took President Trump to task on Wednesday, offering the latest look at how the Continent’s leaders are trying to come to terms with the United States’ shifting policy on issues like the Iran nuclear deal.

Mr. Tusk, president of the European Council, which represents the European Union’s heads of government, used 280 characters on Twitter not only to rebuke Mr. Trump’s head-snapping policy decisions but also to reaffirm the bloc’s commitment to its own agenda.

“We realize that if you need a helping hand, you will find one at the end of your arm,” Mr. Tusk wrote.
US President Donald Trump has been persistently antagonising Europe and Germany in particular, now over his withdrawal from the Iran nuclear deal. European leaders are however afraid of openly confronting America.

Hence the task fell to a senior EU official, the President of the European Council, Donald Tusk, who is actually very close to the German Chancellor Angela Merkel. It is expected that Europe will compromise with America on the issue. However, Trump’s crude and insulting approach in diplomatic matters results in complications for America foreign policy as it provides space for opponents to rally against America. The Western disbelievers will continue to engage in conflict between themselves even while giving the appearance of a common front against Muslims. It is this that will be a key cause of their downfall.