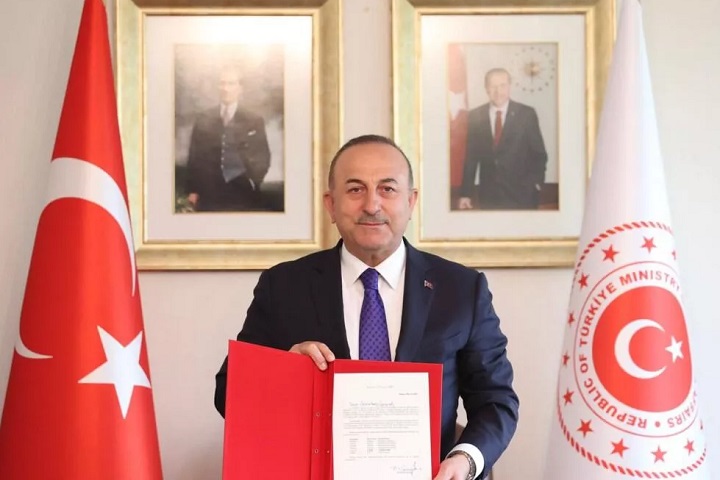 The country name “Türkiye” is replacing “Turkey” at the UN, following a request by Ankara to be referred to as such, the international body announced recently. The new brand “Türkiye” is now in place in foreign languages. Speaking to Anadolu Agency, UN Spokesman Stephane Dujarric said they received a letter by Turkish Foreign Minister Mevlut Cavusoglu addressed to Secretary-General Antonio Guterres, requesting the use of “Türkiye” instead of “Turkey” in the international arena. The spokesman said the country’s name change became effective from the moment the letter was received. Cavusoglu announced the letter’s official submission to the UN and other international organizations on Tuesday. “Together with our Directorate of Communications, we have been successful in preparing a good ground for this. We have made it possible for the UN and other international organizations, countries to see this change to using ‘Türkiye’,” Cavusoglu said at Anadolu Agency’s Editor’s Desk at the agency’s headquarters in the capital Ankara. [Source: Anadolu Agency’s]

How will changing the name of the country help Turkey? The move appears in the same vain as Attaturk adopting the Latin alphabet. What will give Turkey glory and international prestige is a comprehensive return to Islam through the re-establishment of the Khilafah Rashidah (rightly guided Caliphate). It was Islam and the Khilafah that gave Turks (Mamluks, Suljuks and then the Ottomans) international prestige and honour.

Amid widespread criticism from friends and foes over the government’s decision to increase oil prices for the third time in as many weeks, Prime Minister Shehbaz Sharif on Thursday defended the move, claiming he was “left with no choice”, and vowed to take the nation into confidence about the deal inked by the previous Pakistan Tehreek-i-Insaf (PTI) government with the International Monetary Fund (IMF) which, according to him, was the main cause for the country’s economic woes. Rejecting the government’s stance, PTI chairman Imran Khan gave a call for nationwide protests against price hike and loadshedding on Sunday. According to PTI information secretary Farrukh Habib, Mr Khan would also address the protesters through video link at specific places in various cities at 9pm on Sunday. Prime Minister Sharif through a series of tweets acknowledged that the recent hike in oil prices would cause more inflation, but blamed the previous PTI government for the current economic situation of the country. “I wonder whether those who struck the worst-ever deal with the IMF and took patently bad economic decisions have the conscience to face the truth. How can they pretend to be innocent when what the nation is going through is clearly their doing? Details soon,” Shehbaz tweeted. “Acutely aware of the impact that a fuel price hike causes. (The) govt is left with no choice but to raise the prices due to (the) IMF deal that (the) PTI government signed,” he further said, adding: “Will take the nation into confidence on the specifics of the IMF-PTI deal soon. We will get out of these economic difficulties, IA.” Coming down hard on the government, PTI’s Farrukh Habib said dropping the “petroleum bomb” thrice on the masses in just 20 days was nothing but rubbing salt on their wounds. “Just like robbers enter a house in the dark of the night, the imported government too plunders the pockets of the people via petrol and diesel prices in the dark of night,” tweeted PTI secretary general Asad Umar. Similarly, former finance minister Shaukat Tarin tweeted that the increase in oil prices would push inflation over 30 per cent and “crush the middle to lower income groups”. In the lower house, Finance Minister Miftah Ismail remained the target of the lawmakers’ ire during the budget debate after Maulana Abdul Akbar Chitrali of the Jamaat-i-Islami (JI) raised the issue of increase in oil prices. He called the finance minister an “IMF representative”, and asked the government to at least allocate funds for people to meet expenses for burials. Meanwhile, the opposition in the Senate staged a noisy protest against petroleum price hike, gathering close to the chairman’s dais and chanting slogans against the government. The lawmakers ignored the chair’s requests to take their seats, and staged a token walkout from the house. [Source: Dawn]

Rather than coming together and addressing Pakistan’s economic crisis, the political class has imploded and started to blame each other for the crisis. The reality is that the crisis is a symptom of the capitalist solutions imposed on Pakistan by the IMF in collusion with successive governments. The only solution is to return to Islamic economics through the re-establishment of the Khilafah Rashidah.

Authorities in the Indian state of Uttar Pradesh have demolished the homes of several people accused of involvement in riots last week triggered by derogatory remarks made by ruling party figures about the Prophet Muhammad. Muslims have taken to the streets across India in recent weeks to protest against anti-Islamic remarks by two members of the ruling Hindu nationalist Bharatiya Janata party (BJP). Some in India’s minority Muslim community see the comments as the latest instance of pressure and humiliation under BJP rule on issues ranging from freedom of worship to the wearing of hijab head scarves. The BJP has suspended its spokesperson, Nupur Sharma, and expelled another leader, Naveen Kumar Jindal, for the comments, which have also caused a diplomatic row with several Muslim countries. Police have filed cases against the two and the government has said the comments do not reflect its views. Muslim groups have demanded their arrest, while some hardline Hindu groups label them as brave and nationalist politicians. Over the weekend the chief minister of Uttar Pradesh state, Yogi Adityanath, ordered officials to demolish any illegal buildings and homes of people accused of involvement in unrest there last week, the BJP’s state spokesperson said. The house of an alleged leader of the riots, whose daughter is a female Muslim rights activist, was demolished amid a heavy police presence on Sunday. Properties of two more people accused of throwing stones after Friday prayers were also demolished in the state. Mrityunjay Kumar, Adityanath’s media adviser, tweeted a photo of a bulldozer demolishing a building and said: “Unruly elements remember, every Friday is followed by a Saturday.” Opposition leaders said Adityanath’s government was pursuing unconstitutional tactics to silence protesters. On Sunday, Jindal said his family faced continuous threats and some of his followers said a crude bomb was defused near his residence in capital New Delhi. The prime minister, Narendra Modi, has so far not commented on the communal unrest. [Source: The Guardian]

The leaders of the Muslim world who were vocal against the disparaging remarks about the Messenger of Allah (saw) have gone extremely quiet over India’s continued subjugation of Muslims. The Indian government adopting the tactics of the Jewish state has embarked on a new crusade against its Muslim population. This slaughter can easily be stopped if Muslim countries cut commercial ties with India, which includes halting energy supplies and repatriating Hindu workers.