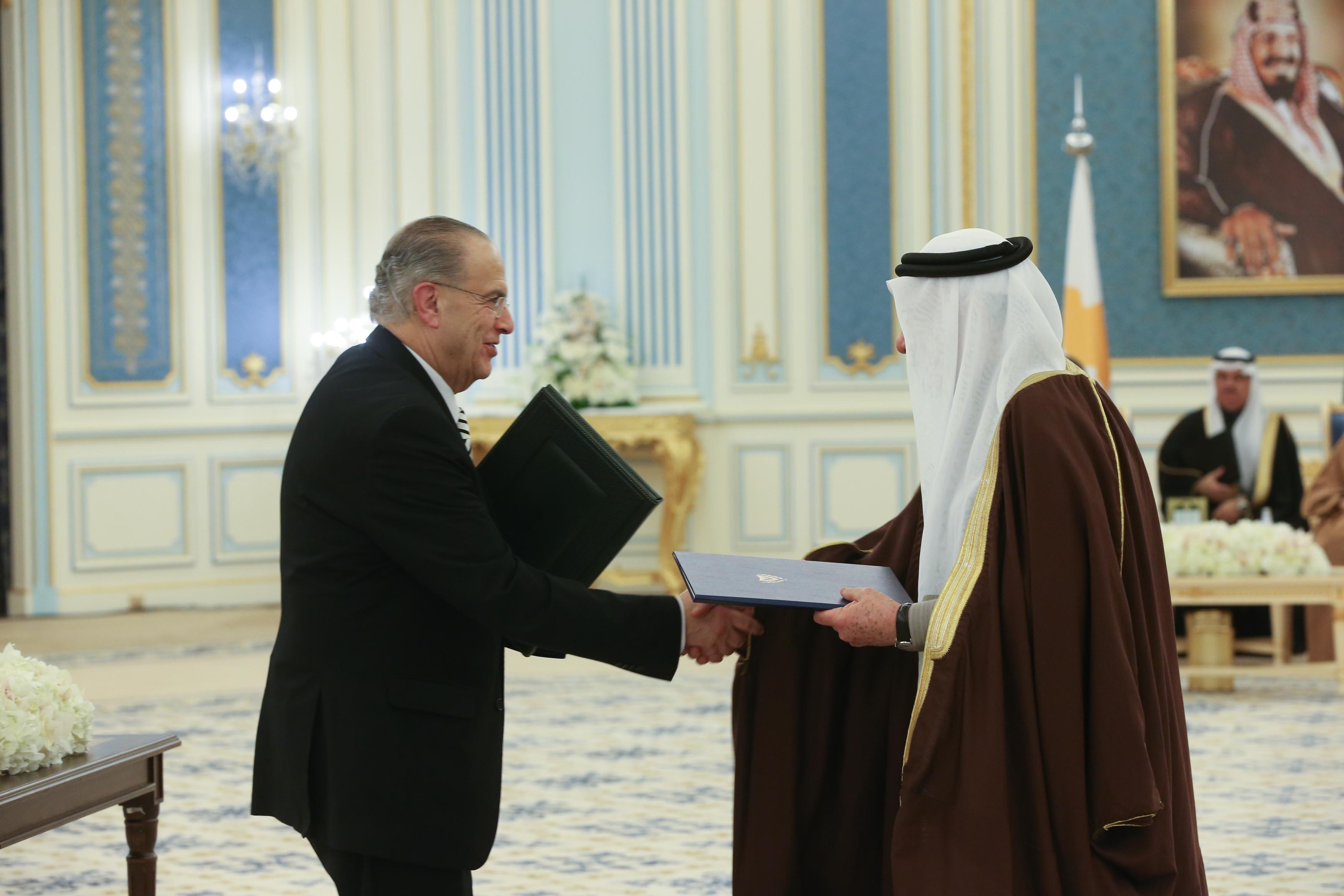 Saudi Arabia’s foreign minister says his country is keen to explore ways of strengthening relations with Cyprus given the European Union member country’s geographic location and long-standing ties with the Arab world. Ibrahim Al-Assaf’s visit to the east Mediterranean island nation on Wednesday where he also met with Cypriot President Nicos Anastasiades was the first by a top Saudi official. Al-Assaf said there’s “high interest” in developing relations “on all fronts.” Among the topics they discussed were some of the most pressing challenges in the region, including the Palestinian-Israeli conflict, Syria, Iran and Yemen. Cypriot Foreign Minister Nikos Christodoulides said the two men agreed to focus initially on tourism and investment. “In this context, we stand ready to proceed with the facilitation of bilateral Business Forums in our two countries, respectively, within the framework of our Economic Diplomacy program,” he said. Christodoulides noted a shared understanding to jointly address challenges like terrorism, the rise of extremism and climate change. The Cypriot foreign minister said EU-Saudi cooperation is key to dealing with regional challenges and that Cyprus would continue advocating that in Brussels. Both sides also discussed opportunities for cooperation regarding the Kingdom’s Vision 2030, which aims to diversify the economy and develop political, economic, energy, security, military and defense fields. Christodoulides also briefed Al-Assaf on the latest developments on the Cyprus problem and expressed their sincere appreciation for Saudi Arabia’s support of their “efforts to reach a just, viable and comprehensive solution” to the issue. “Taking into consideration recent developments in our Exclusive Economic Zone and particularly the illegal activities and aggressive behavior of Turkey, the solidarity and support of countries such as Saudi Arabia is indispensable,” Christodoulides said. Speaking during a joint press conference Al-Assaf said the Kingdom “supports the legitimacy and sovereignty of Cyprus and the decisions by the United Nations and hopes that the two sides will solve the problem peacefully.” He added: “We need to take advantages of the many elements that bring us together and the economic opportunities that our two countries offer.” Meanwhile, Cyprus’ defense minister said the east Mediterranean island nation and neighbor Egypt are exchanging information to bolster security around an offshore search for natural gas as part of enhanced defense ties. Savvas Angelides says the two neighbors’ information-sharing extends to countering any extremist threats. The Cypriot minister says de [Source: Arab News]

America is working scrupulously to create a new security-energy alliance of countries consisting of Greece, Cyprus, the Jewish entity, and perhaps Saudi Arabia and Egypt to counter Russia’s energy exports to Europe. America wants these countries to provide the right energy mix (gas and oil), so that Europe becomes less reliant on Russia.

The Taliban sent a team to Russia, and plans to visit China, Iran and Central Asian states to gauge support for the U.S. to be forced to leave Afghanistan, Reuters reported, citing the group’s officials. The group wants to keep regional leaders informed about the breakdown of the talks and U.S. President Donald Trump’s decision to suspend the process just before a peace treaty, the report said, citing an unidentified a senior Taliban leader. The planned visits are not intended to try to resume talks with the U.S., according to the report. Discussions between Trump and the Taliban were called off and the American envoy to Afghanistan was recalled after the U.S. leader said he canceled secret meetings at Camp David, intended to allow for a draw-down of American forces after 18 years in the war-torn country. [Source: Bloomberg]

Sending delegations to rival powers is not enough to evict America from Afghanistan. The Taliban must join forces with Pakistan to permanently end America’s occupation of Afghanistan.

Pakistan’s prominent TV and film stars, players and celebrities from various fields on Friday joined Prime Minister Imran Khan in showing their support to the Kashmiri people in the Indian-administered Kashmir. Former Pakistan cricket team captain Shahid Khan Afridi on Thursday had given a call to the nation to join Imran Khan in his Muzaffarabad ‘big rally’ and express solidarity with the people of the Kashmir. Imran Khan had on Wednesday announced to visit Muzaffarabad, the capital city of Pakistan Administered Kashmir (PAK), on Friday to address a ‘big rally’ there. Cabinet ministers, media persons and Pakistan Tehreek-e-Insaf (PTI) supporters all have gathered in the city as part of the government’s ‘Every Friday Protest’ against the Indian government’s August 5 act of doing away Kashmir’s special status. Friday’s rally was not only attended by a large number of supporters of the PTI and locals but also celebrities belonging to showbiz and media. Besides Afridi, showbiz stars actors and singers including Javed Sheikh, Shan, Humayun Saeed, Maya Ali, Sahir Ali Bagga, Faakhir, Hareem Farooq and many others travelled to the PAK and attended the rally. Shan in his Twitter post remarked: “Dear PM Imran Khan PTI sir, United we stand for the rights of Kashmiris. The whole Nation stands behind your call. Hope support prayers voice till freedom.” Several other celebrities took to twitter and other mediums to show their support and urged their fans to participate in the public gathering. TV star Maya Ali tweeted, “Let’s stand by our Prime minister this Friday and show our support for our Kashmiri brothers and sisters. I will also be in Muzaffarad to attend the Prime Minister’s jalsa [procession], and I request you all to attend, as this is the time to stand up and raise our voices.” [Source: The Gulf News]

Convening rallies with celebrities will never liberate Kashmir. The liberation of Kashmir requires the mobilization of the Pakistani army, nuclear weapons and brinkmanship. Khan has fallen way short of employing these tactics and this underlines Khan’s desire to accept the status quo with India.