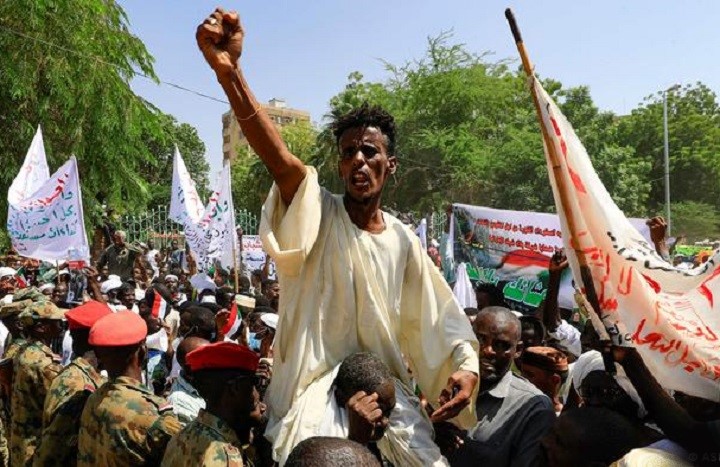 On Saturday, October 16, 2021, the Sudanese capital witnessed demonstrations calling for the dissolution of the transitional government, called for by the Forces of Freedom and Change – the National Charter Group, in harmony with the military, the demonstrators were able to reach the Republican Palace and set up a platform for the sit-in. In return, the Central Council for Freedom and Change calls for counter-demonstrations on Thursday, 10/21/2021.

This crisis is a struggle party for the seat of government, organized by Western embassies, and these soldiers and civilians are nothing but tools in this struggle. The two sides are competing to win the confidence of the colonial Kuffar to implement their agenda in this country.

Military and civilian rule are close, and they are two sides of the same coin, which is the application of the systems of Kufr upon people, and complete compliance with the instructions of the Kafir West, which is what led us to the depths of misery and hardship of life. If this crisis is resolved in favor of any party, it will not result in any change in people’s lives. The implementation of the IMF’s prescriptions will continue to increase poverty, kill more poor people, and uproot Shariah rulings from people’s lives. We are moving forward by implementing CEDAW agreements on the ground, and the file of normalization with the Jewish entity proceeding at an accelerated pace to reach the stage of opening embassies, and all the crimes of the Kuffar against the Ummah will not be stopped by these two accelerating parties to implement the plots of the Kuffar.

And we, as Muslims, must establish the rule and authority on the basis of the great ideology of Islam, which prevents the occurrence of such crises and fortifies the state and society, applied by the Khilafah (Caliphate) State upon the method of the Prophethood as follows:

First: The Ummah that possesses the authority, pledges allegiance to the Khaleefah (Caliph) of the Muslims, who derives the authority of his autonomy from the Ummah, and the rest of the rulers from the assistants, governors and workers derive their authority from the Khaleefah. Therefore, the caliph is the one who appoints and dismisses the rulers, and the caliph in his care of the affairs of the Ummah does not appease a party or a bloc of parties, nor any person with power, and there is no place for shares or compromises under the Khilafah.

Second: The ruling is a trust and a responsibility, and not a booty that agents and tools of embassies fight for its possession. The Messenger of Allah, peace and blessings be upon him, said: «وَإِنَّهَا أَمَانَةُ وَإِنَّهَا يَوْمَ الْقِيَامَةِ خِزْيٌ وَنَدَامَةٌ إِلَّا مَنْ أَخَذَهَا بِحَقِّهَا وَأَدَّى الَّذِي عَلَيْهِ فِيهَا» “and it is a trust which will be a cause of shame and regret on the day of resurrection except for him who undertakes it as it ought to be undertaken and fulfils his duty in it.”

To take the responsibility of true ruling; is, by giving the Shar’i pledge of allegiance, and the performance of duties means ruling by what Allah (swt) has revealed. The Almighty says:

“and judge between them ˹O Prophet˺ by what Allah has revealed, and do not follow their desires.” [TMQ 5:49]

Third: The Khaleefah of the Muslims is the commander of the army, and the armed forces in the state are one force. There is no army, police, rapid support, or intelligence apparatus separate from each other, and armed movements are not allowed, not even to negotiate with them, and the state fights everyone who bears arms.

Fourth: It is forbidden to establish parties other than those upon the basis of Islam, and it is forbidden for parties to have any relationship with foreign embassies.

Fifth: Closing the roads and harming people is forbidden by Shareeah, regardless of the claims of injustice and marginalization, and the demand for rights. The end does not justify the means, and political action on the basis of Islam is the disciplined tool for removing injustice and changing corrupt regimes.

O Our People in Sudan: Do not be emotionally submissive prey to the tools of the colonial Kafir from the advocates of the military or the civil, they drive you to achieve the goals of their masters, and know that you belong to the best Ummah raised for humankind, and that Islam, as a complete system of life, is the only one that can solve all your crises if you deliver it pure to the helm of power, that the Khilafah State would implement upon the method of Prophethood, so be of the workers for it, for it is the duty of your Lord and the source of your glory, and the reason for your revival and progress.

O Loyal People of Power: Isn’t it time for you to stop the Western embassies’ tampering with your country and your military institution, which has become a target for every shooter to weaken it?! Only complete liberation from colonialism and its tools will stop the deterioration of your situation and the condition of your country, which can only be achieved by giving support to Hizb ut Tahrir to establish the Khilafah Rashidah upon the method of Prophethood. It alone in the political arena has the will to achieve the correct revival, and the party has prepared for this liberation a constitution for the state from the great ideology of Islam, and the party is politically aware of the civilization of the Kafir West and its ploys, means and methods, so align yourselves O faithful ones to the truth, and be supporters of Allah, and produce a death certificate for the civilization of the Kafir West.