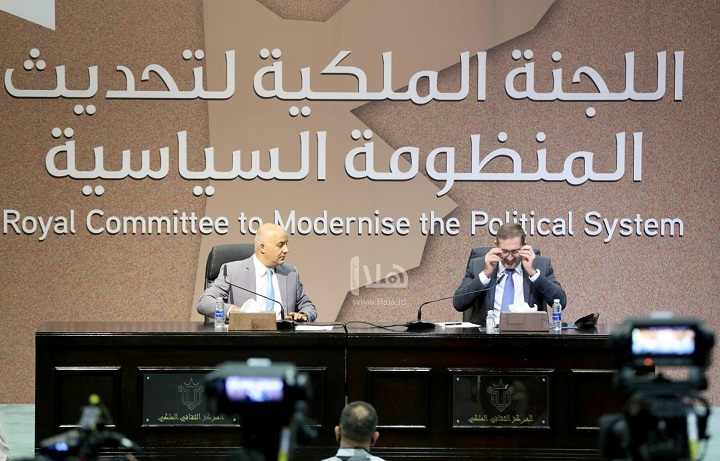 The Government has recently passed to Parliament a proposal to establish a National Security Council in the Kingdom aimed at facilitating cooperation and coordination between military and civil institutions. The government has added the proposal to the package of constitutional amendments based on the recommendations of the Royal Committee to Modernize the Political System. (Al-ra’i, 22/11/2021).

According to the draft constitution, the formation of the Council, which will be headed by the King, will comprise members including Prime Minister, Minister of Defense, Minister of Foreign Affairs, Minister of Interior, Director of Intelligence, and the Chief of Staff, in addition to two members chosen by the King.

The regime in Jordan is trying to demonstrate its competence in understanding and implementing the agendas of the colonial countries such as Britain, which created it and is loyal in its political subservience to it; and America, which considers it its strong ally, and historically adopted supporting it economically with aids and by its involvement in its colonialist program of the International Monetary Fund (IMF), as the state’s debts reached 34 billion dollars. As well as America gave Jordan a strategic ally for its partnership in the war on Islam and its modern strategic vision to take Jordan as a station to re-establish its troops in the region and strengthened this through the joint defense agreement, as well as its close relationship with the Jewish entity.

Although the US administration acts in collusion with the comprehensive dictatorships that allied with it, as its liberals to promote democracy accuse it, in countries receiving economic and military economic and security assistance such as Jordan, it exercises large pressure on the regime to achieve the so-called democratic reforms, freedoms of expression, real representation of the residents, formation of elected governments and women’s rights, as an excuse for access to the political medium. Thus, the outputs of the Royal Commission on these demands are now discussed in the House of Representatives for their approval, after several reform initiatives that have yet to see the light of day.

As the regime’s head in Jordan feels the danger of undermining his reign, he undertakes proactive political measures to prevent this threat, such as the so-called “nip sedition in the bud”, after a tempting bait of America, to sign a joint defense agreement with it, and based on this comes the response to the so-called democratic reforms to amend elections and political parties law, forming elected or parliamentary governments under the umbrella of the constitutional monarchy, which constitutes what the regime thinks as a system that satisfies the relevant countries…

From here, the government has submitted the proposal of the National Security Council to the House of Representatives for discussion and approval, which has received great discontent and was described by deputies and politicians as a coup against the Constitution and sets out the powers of Governments and place them with this council, that is with the king. As if the current man-made constitution has stopped the regime from practicing oppression against the people with corruption, taxes, indebtedness and friendly relations with the enemies of the Ummah, as if governments were exercising the powers, except that they were worn and removed like socks, and its function was only embellishing the ugly actions of the regime!

Perhaps the comment of the former Jordanian Prime Minister Samir Al Rifai, as Chairman of the Royal Committee to Modernize the Political System at the sidelines of the debate hosted by the Center for Protection and Freedom of Journalists in the capital Amman, on the origin of the idea that “the National Security Council has already been born to impede decisions that may occur by future partisan governments, and thwarting those decisions if they threat the interests of the State and the citizen. That is, the regime in Jordan takes protective procedure by the formation of this council in the event that partisan or elected governments are formed in the future, by nullifying any proposal or measure of such governments that the regime deems a threat to its existence, in light of the ally’s American  struggle to take power for those who are loyal in his subservience to it, both within the Hashemite family or outside, and between the dependency of the current regime to the old British colonist, which has created it, preserved it with intrusion, confusion and exchange of deals with the American rival.

The National Security Council is not to preserve the country and people’s security from the enemies, nor to preserve the wealth of the Ummah which has been looted in favor of its enemies, through humiliating agreements with Jews and America, that brought it to a state of unspeakable humiliation, rather, it is for the sake of the security of the regime which has started to sense real fear, not from the greed of another colonist only, but to keep it away from the Ummah, which has come to believe in the implementation of the Shariah of Allah in an Islamic state. A state that will establish justice and mercy and restore to the Ummah its dignity and glory by liberating it from the Jewish entity in an hour of a day, and expelling the influence of America and Britain from the entire region. The security that the Ummah is seeking is that which a responsible guardian will accomplish and which is his top priority.

The secret of the strength of this Ummah, the basis of its dignity, and the source of its glory, is in its religion and Aqeedah, and the extent of its commitment to its ideology. Security and stability will not return unless we return to our religion and support those working for the establishment of its state. Allah (swt) says:

“They who believe and do not mix their belief with injustice – those will have security, and they are [rightly] guided.” [Al-Ana’m: 82].

If people comply with Allah’s law, apply His provisions, and establish His state, the Khilafah Rashidah (rightly guided Caliphate) State on the method of the Prophethood, they will ensure full security on their money and their honors and blood.