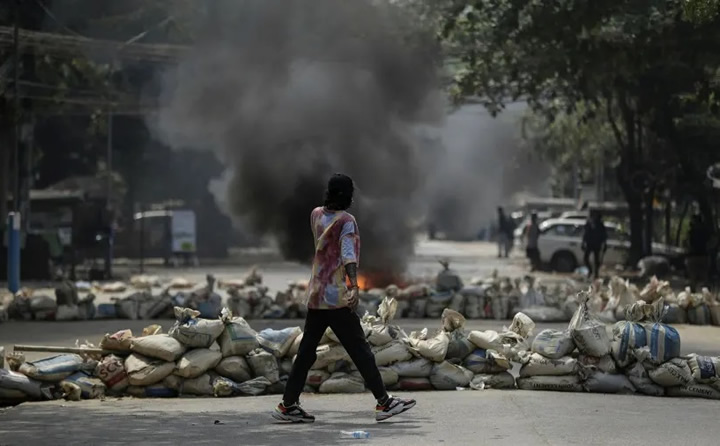 Once again, the world which was meant to be a peaceful and enjoyable place to all creatures, is witnessing atrocious tortures, odious brutality and heinous murder under the guise of maintaining order and stability and under the pretext of crackdown; this time around, in Myanmar, Saturday, 27/3/2021, being the deadliest and the worst day that saw more than 100 innocent people butchered with Mandalay, the former capital city bearing the brunt of casualties. Protesters who have been deceived by the fallacious colonial democratic values of freedom of expression, association and demonstration, being brutally lynched and monstrously massacred by an oppressive regime pregnant with a history of maltreatment to its subjects.

Comment:
Prompting the Western colonial states like America, Britain, Australia, Germany, Greece, Netherlands, New Zealand and their proxies like Japan who are forefront leaders of all this disgrace under their capitalist ideology to utter a hypocritical joint statement meant to cosmetically hoodwink the world by feigning to be so concerned and considerate:

“A professional military follows international standards for conduct and is responsible for protecting – not harming – the people it serves.”

US Secretary of State Antony Blinken calling the Saturday incident a reign of terror. His British counterpart, Dominic Raab terming it a new low. While the UN Secretary General, Antonio Guterres, said he’s has deeply shocked by the heinous massacre that saw more than 114, according to Al Jazeera news, being lynched by military: people who are entitled to protect them .This is sheer shedding crocodile tears. As their countries have immensely invested in military than health, education and any other sector. They continue to shed more blood than any other country in the world like Iraq, Syria, Afghanistan; and their man-made ideology: the capitalist democratic system, is the source of all the calamities that face the world.

Tantamount to many other countries that were once directly or indirectly under imperialism, this is not the first time that Myanmar is witnessing this savagery and ferocity. It has been there since independence in 1948 as dregs of colonialism, it was there on 8/8/1988, and most likely will persist to be there, as long as they live under the man-made rule.

This time, the innocent civilians are demanding the end to a stratocracy that came into power in 1/2/2021, after deposing a democratically elected leader: Aung San Suu Kyi of National League for Democracy (NLD), who like the rest of democratic leaders in the world, starting from the West itself to the so called third world countries, openly failed to unite her people and create religious harmony; a stark confirmation that democracy is not a melting pot as its proponent the West allege.

An army general, in Aung Hlaing, a military overthrew Aung San Suu Kyi, who is ironically a Nobel Prize laureate, failed to speak out against the vicious attacks, tortures and heinous murders unleashed against Muslims religious sites in the holy month of Ramadhan in 2015 by more than 100 hardline Buddhists who attacked Muslims. Prompting religious violence that saw more than 100,000 innocent Muslims being driven out of their home.

From 1st February 2021, the day of the military coup d’etat in Myanmar, up to March 2021, more than 400 have so far lost their lives under the man-made rule. A clear indication that man-made rules create more calamities and disasters under the man-made laws which are executed by greedy and avid leaders who make laws primarily to safeguard their own selfish interests.

2nd March 1962, the military under the coup d’etat leader Ne Win, overthrew the government of the Prime Minister U Nu and replaced it with an authoritarian political party: The Burma Socialist Program Party that reigned havoc from economic mismanagement, corruption, police brutality to the withdrawal of currency note without compensation.

Oppression that led to the famous 8888 Uprising which culminated on 8/8/1988 was orchestrated by students from Rangoon Arts and Science University and Rangoon Institute of Technology.

Myanmar, just like the rest of the world, can only enjoy tangible stability and peace under Khilafah Rashidah (rightly guided Caliphate), after the open failure of the man-made ideology: the capitalist democratic ruling system. The current stark tenacious audacity and intrepidity shown by the civilians in the clamour for a fallacious man-made system which has already failed in broad daylight, should instead be diverted to call for the re-establishment of Khilafah which does not fail anyone.