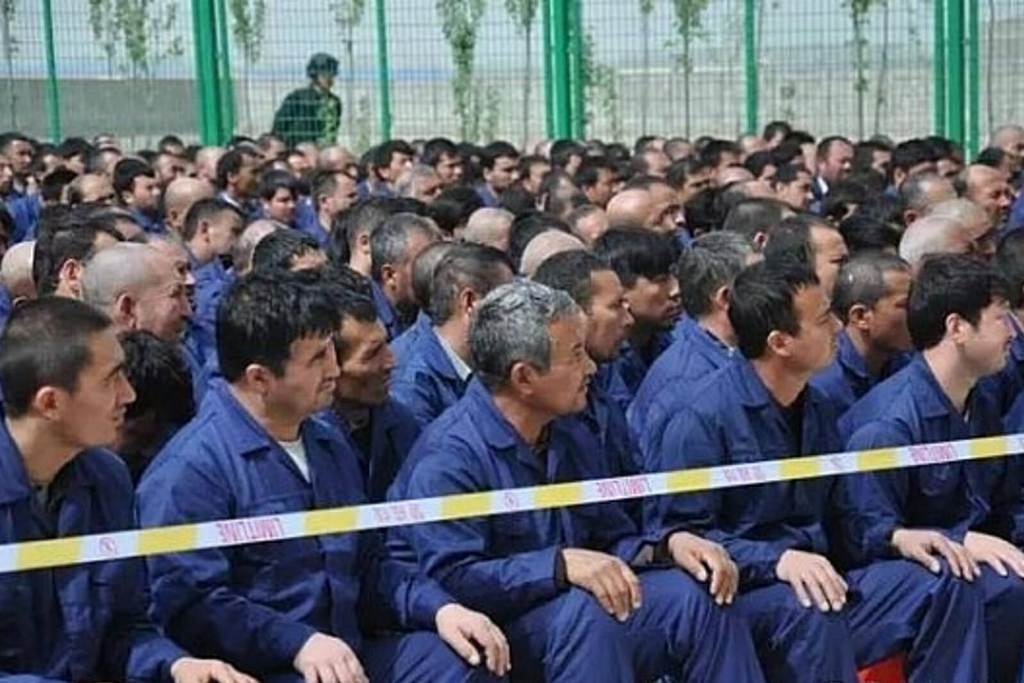 More and more harrowing accounts of the torture tactics of Chinese officials over the Muslim Uighur population have surfaced via social media. Chinese men trespassing the homes of the Muslim Uighur and forcing themselves upon the Muslim women while they fear backlash for their Muslim husbands in the detainment camps. Uighur movement monitored and forced to abandon Islamic rituals.  (5 Pillars, World Uyghur Congress)

Had it not been for the protection of the dignity of the Uighur Muslim women and men, I would attach hundreds of images of their torture and humiliation. Heedless rulers of the Muslim lands turn a blind eye to the suffering of the Muslim Uighur Ummah while exposed Muslim women suffer inconceivable torture surpassing that of the Middle Ages – the Chinese regime takes pride in their unique torture methods while the rulers of the Muslim lands take pride in displaying their acceptance of various Chinese officials and sanctifying foreign deals, and commanding armies to kill their own Ummah instead of the Mushrikeen.

Had it not been for the Islamic etiquette – the curse words in all of the languages would not suffice to describe the insolence and disgrace of those who hold the pens to unleash the Ummah militaries to release them from their bunkers to fuel their jets to rain bombs over the heads of the Mushrik China and its regime.

Let them fret over maintaining their artificial boundaries instead of uniting and expanding the Muslim land into one land – no, it is an not an empire nor a kingdom nor a colonial entity rather it is the state of justice and mercy to all of humanity, a Khilafah Rashidah (rightly guided Caliphate) upon the method of the Prophethood, where a righteous sincere leader would assume the responsibility for being the rescuer of the oppressed from the Uighur Muslims, young and old.

We have regular people with beating tender hearts making statements of condemnation from perceptive athletes to brave human rights activists while we face dead silence from military officers. What a paradox, people with power versus people with voices … military might is paralyzed while common voice pleads to the masses.

However, we have inhumane men who are drilled into their chairs salivating over their titles and “un-honorary” mentions from their masters – oh how gentle and servile they are. Yet the opposite to their own population who cry in pain bringing mountains to crumbling pebbles instead of majestic peaks in the horizons if they could react to the moans of the Ummah. Allah Taala promises,أُو۟لَٰٓئِكَ ٱلَّذِينَ ٱشْتَرَوُا۟ ٱلضَّلَٰلَةَ بِٱلْهُدَىٰ وَٱلْعَذَابَ بِٱلْمَغْفِرَةِ فَمَآ أَصْبَرَهُمْ عَلَى ٱلنَّار “Those are the ones who have exchanged guidance for error and forgiveness for punishment. How patient they are in pursuit of the Fire!” [2:175] يَومَ تَبْيَضُّ وُجُوهٌ وَتَسْوَدُّ وُجُوهٌ فَأَمَّا ٱلَّذِينَ ٱسْوَدَّتْ وُجُوهُهُمْ أَكَفَرْتُم بَعْدَ إِيمَٰنِكُمْ فَذُوقُوا۟ ٱلْعَذَابَ بِمَا كُنتُمْ تَكْفُرُونَ “On the Day [some] faces will turn white and [some] faces will turn black. As for those whose faces turn black, [to them it will be said], “Did you disbelieve after your belief? Then taste the punishment for what you used to reject.”” [3:106]

While US politicos are swarming around Trump and his impeachment – the international media is not on the Uighurs. Where is the human rights movements of human rights? Where are the women associations and women movements? Or are those human beings unworthy of attention? This is where power supersedes ethics. Allah Almighty warns, خَالِدِينَ فِيهَا لَا يُخَفَّفُ عَنْهُمُ الْعَذَابُ وَلَا هُمْ يُنظَرُونَ “Abiding eternally therein. The punishment will not be lightened for them, nor will they be reprieved.” [2: 162] وَقَالَ ٱلَّذِينَ ٱتَّبَعُوا۟ لَوْ أَنَّ لَنَا كَرَّةً فَنَتَبَرَّأَ مِنْهُمْ كَمَا تَبَرَّءُوا۟ مِنَّا كَذَٰلِكَ يُرِيهِمُ ٱللَّهُ أَعْمَٰلَهُمْ حَسَرَٰتٍ عَلَيْهِمْ وَمَا هُم بِخَٰارِجِينَ مِنَ ٱلنَّارِ “Those who followed will say, “If only we had another turn [at worldly life] so we could disassociate ourselves from them as they have disassociated themselves from us.” Thus will Allah show them their deeds as regrets upon them. And they are never to emerge from the Fire.” [2:167]

Is this a rant? Maybe.

Is it needed? Yes.

Will it fall on deaf ears? Maybe.

But I believe in Allah and His Mightiness – and His Victory for His believers and His severe Torment for the oppressors and transgressors. For the Almighty says, مَتَٰعٌ قَلِيلٌ ثُمَّ مَأْوَىٰهُمْ جَهَنَّمُ وَبِئْسَ ٱلْمِهَادُ “[It is but] a small enjoyment; then their [final] refuge is Hell, and wretched is the resting place.” [3: 197]

“And that day the believers will rejoice. In the victory of Allah. He gives victory to whom He wills, and He is the Exalted in Might, the Merciful. [It is] the promise of Allah. Allah does not fail in His promise, but most of the people do not know.” [30:4-6]