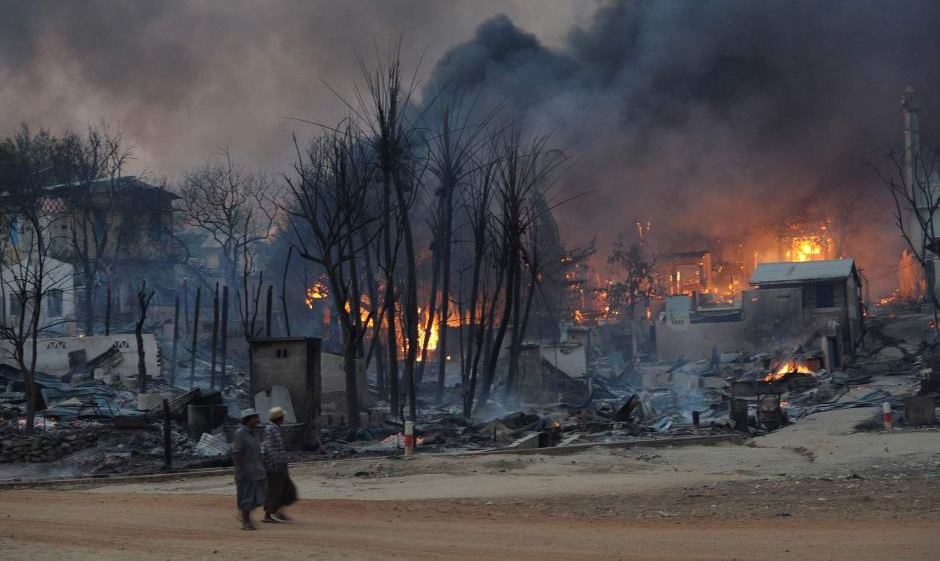 Muslims are being killed daily, hundreds have been detained by the military, and at least 30,000 have fled for their lives while Myanmar military started a crackdown in Arakan. Satellite imagery reveals mass destruction in Rohingya villages, said Human Rights Watch and other humanitarian organizations. Bangladesh Border Guard (BGB) has been pushing back over hundreds of Rohingya who tried to enter in Bangladesh territory. Even Bangladesh Police is also arresting general people for allegedly helping the Rohingya to enter Bangladesh.

Such a heinous act of exterminating a religious group of people is rare in history. Sarcastically, the atrocities are committed by Buddhist junta of Myanmar, who believe killing even an insect is a great sin. So, the culprits count the blood of an insect is holier than the blood of Muslims. The authorities of the world, Muslim and non-Muslim alike, are tacitly supporting the murder by keeping silent over the event. The voices that rose against such horrendous act of Buddhist junta are only a handful powerless people and organizations. Adding to the bleak, so-called leaders of Muslim countries have also abandoned the oppressed Muslims of Arakan (commonly known as Rohingya) sacrificing their brotherhood while upholding their citizenship drawn in nationalist ink.

The situation is worst in Bangladesh, which is the nearest refuge of the Muslims of Arakan and the hope of getting support from their Muslim brothers. The Hasina government of Bangladesh is dabbing the refugee Muslims as ‘infiltrators’, and pushing them back to the land of oppression. She refuses to give shelter of the Muslims in a land, which she claimed to be ruled under Madinah Charter! Those who managed to enter Bangladesh are sustaining unspeakable suffering without food and shelter.

Role of the government and their vested intelligentsia is also ignominious as they constantly expressing their concerns over Bangladesh’s incapability of providing shelter to these helpless people while boasting about its success of development. While their responsibility towards the Muslims of Arakan is not only to provide shelter, but to protect them from the oppressive kuffar regime by sending army, this criminal government of Bangladesh has, defying the emotions of the Ummah, sold the basic tenets of Islam in exchange of filthy secularism and nationalism, which degraded them to the level of animal.

“The parable of the believers in their affection, mercy, and compassion for each other is that of a body. When any limb aches, the whole body reacts with sleeplessness and fever.” (Sahih Bukhari)

Also, it is as clear as daylight that the so called secular values of human rights are not applicable while dealing with Muslims. Today the entire secular world is united to exterminate Muslims from the face of earth. They embarked upon Muslims all over the world in the feast of sucking their blood and looting their wealth.

“The People will soon summon one another to attack you from every place in the same way that a pack calls around its prey” Someone asked, “Will that be because of our small numbers at that time?” He replied, “No, you will be numerous at that time: but you will be froth like that carried down by a torrent (of water), and Allah will take the fear of you from the breasts (hearts) of your enemy and cast al-wahn into your hearts.” Someone asked, “O Messenger of Allah, what is al-wahn?” He replied, “Love of the world and dislike of death.” (Musnad Ahmad)

Muslims should realize the essence of the noble hadith and reject the nationalism which is the greatest hurdle for them to be united under one creed and leader, and form Khilafah state. More and more people are waking up to the reality that only Khilafah state has the potential to restore the brotherhood of global Muslims. Had there been a presence of Khilafah with pious leadership, only then we could have been able to protect the oppressed Muslims of the world including the Muslims of Arakan through mobilization of its strong army. Khilafah state shall not only protect the Muslims, but also be a sanctuary of the oppressed non-Muslims of the world, as it was before.

“What reason could you have for not fighting in the Way of Allah – for those men, women and children who are oppressed and say, ‘Our Lord, take us out of this city whose inhabitants are wrongdoers! Give us a protector from You! Give us a helper from You!’?”