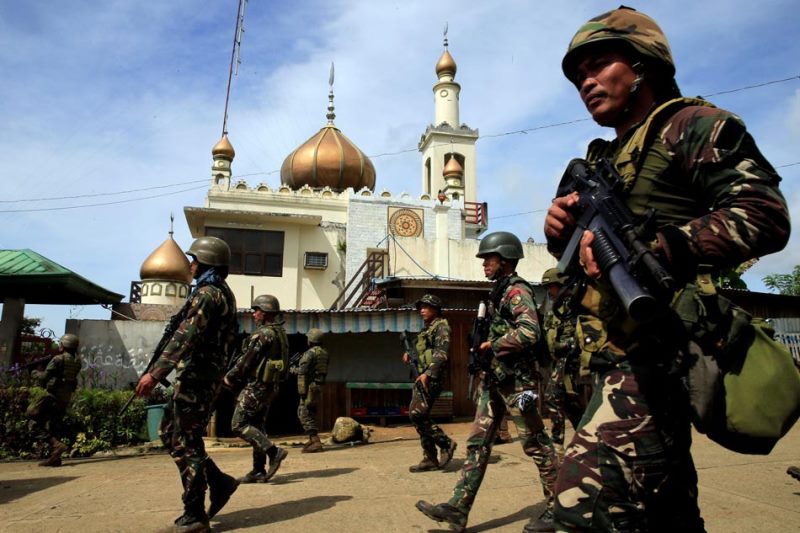 Lawyers in Lanao del Sur Philippine expressed their “severe outrage” over alleged martial law abuses in Marawi City, Mindanao – a mainly Muslim city of about 200,000 people.  Philippine President Rodrigo Duterte declared martial law on the province a day after the deadly siege of Marawi claimed by ISIS. “The IBP-Lanao del Sur Chapter hereby expresses its severe outrage and condemnation over illegal searches and seizures in Marawi City by military men, police, and other law enforcement agencies which result in rampant loss and deprivation of properties and possessions of innocent civilians,” they said as reported by Rappler on 10th June.

They said the Philippine military and the police had committed “wanton disregard of sanctity of domicile, the right against deprivation of property without due process of law, the right to be secure in one’s person, house, papers and effects against unreasonable searches and seizures and the privacy of communication and correspondence of innocent civilians.” The lawyers said their claim was based on “first-hand data and information fresh from the battle field” they had gathered since the May 23 implementation of martial law.

Al Jazeera correspondent Jamela Alindogan confirmed that residents who initially fled and wanted to return to the city were being stopped by military forces. “Martial law is being imposed here and across the entire island of Mindanao. Anyone is subject to investigation, even children,” Alindogan said.

Duterte’s secular martial law is clearly part of his submission to US’s agenda against ISIS and also reflects his amoral attitude against Muslim, humanity including Muslim women. He gave his soldiers carte blanche to commit the most heinous of crimes and that he will take responsibility if his soldiers violate citizens’ rights in Mindanao, including by committing rape. “If you raped three (women), I will be the one to admit that it’s me,” Duterte said. This is the epitome of western civilisation where vile person(s) are in charge of people’s affairs.

Nowadays if we look at the wider context, Muslims always became unworthy victims almost in all counterterrorism projects globally. Western wars have killed four million Muslims since 1990. Landmark research proves that the US-led ‘war on terror’ has killed as many as 2 million people, but this is a fraction of Western responsibility for deaths in Iraq and Afghanistan over the last two decades. Muslim always become unworthy victims on behalf “war on terror”. Why are the lives of Muhammad’s Ummah so worthless in this modern era? Whereas our noble Prophet ﷺ said:

“For Allah, killing a believer is worse than destroying all the earth.” (Narrated by An Nasa’i)

Nothing is different with our brothers and sisters in Marawi City, they are known as Muslim Moro. As typical, other predominantly non-Muslim countries where discrimination against Muslim minorities is very strong, the Moro Muslims in southern Philippines are no exception. Compared to their non-Muslim fellow citizens, many Muslims who live on Mindanao Island are far behind in their lives. This is because the Philippine government regards them as rebels. Even though the region is the most fertile and rich area with natural resources in the Philippines. But the facts show, this region has become the poorest region in the country with no development, after the conflict that began four decades ago. The Philippine government has forbidden Muslims to rule in their own territory and control their wealth.

Recently under Duterte leadership, the regime has become more and more repressive against Muslims on behalf of counterterrorism agenda. For decades, they have been helpless victims of predatory Kuffar rulers who are allowed to exist by the world system that discriminates against Muslims. As long as the world system is still as it is today, undoubtedly the suffering of the Ummah of Muhammad throughout the Islamic world would never end. It is because the root problem of this suffering is nothing but the absence of Khilafah which is the shield for Muslims that would eliminate the hegemony of the Kuffar on the Muslims and protect the honor of Muslim women and children throughout the Islamic world. Recall the words of the Prophet ﷺ:

“Indeed the Imam (Khaleefah) is a shield from behind whom (one) would fight and one would protect oneself.” (Narrated by Muslim)