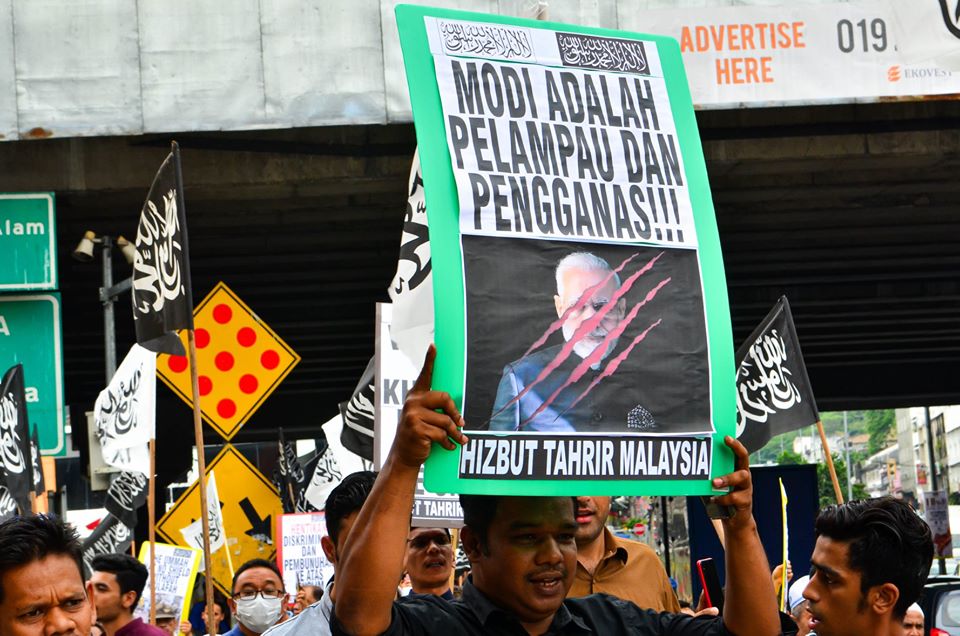 Hizb ut Tahrir / Malaysia held a peaceful demonstration in front of the High Commission of India, Kuala Lumpur on 06/03/2020, protesting the massacre of the Muslims in India, especially in New Delhi. The Hindu extremists, under the permission and co-operation of Prime Minister Narendra Modi started to kill the Muslims, burning mosques, destroying houses and other properties after the Muslims protested the Citizenship Amendment Act 2019. Despite its claim and pride of being the biggest democracy in the world, India has, without shame, passed the most discriminative Act and disclosed its intention to make India a Hindu State without any Muslim. Modi dares to commit such a heinous crime when his master, Trump, granted him the greenlight to kill Muslims under the pretext of fighting ‘Islamic radicalism’.

The gathering began right after Friday prayers at Masjid Jamiul Ihsan located 250 meters away from the High Commission. Protesters marched from the mosque with vigorous chanting and Takbeer along the way. Upon arriving, Ustaz Abdul Hakim Othman as the spokesman of Hizb ut Tahrir / Malaysia who led the demonstration was denied access to hand over the memorandum and was just asked to place it in the letter box outside the building. In his emphatic speech later, Abdul Hakim pointed out to the crowd that the non-acceptance of the memorandum by the High Commissioner or his representative indicates nothing but cowardice and proof of guilt of the crimes committed by the Hindu extremist regime of India.

In his speech, Abdul Hakim also called upon the Malaysian Armed Forces and all Muslim armies in general, Pakistan and Bangladesh in particular, to declare Jihad Fi Sabilillah in order to save the Muslims in India and to free them from the oppressive Hindu extremist regime. Finally, before concluding his speech, the Spokesperson of Hizb ut Tahrir / Malaysia called upon all Muslims to work hand in hand with Hizb ut Tahrir to re-establish the Caliphate, as the one and only solution to save the Muslims throughout the world, in addition to uniting them under one leadership as obliged by Islam. “Hizb ut Tahrir works day and night across the globe to resume the Islamic way of life and to re-establish the Khilafah (Caliphate) in which its return had been promised by Rasulullah ﷺ”, Abdul Hakim closing his spirited speech.

The demonstration ended peacefully even though the anger of protesters in the gathering was so apparent. Hizb ut Tahrir / Malaysia hereby call all Muslims, especially in India to reject not only Modi, but also the democratic system which allowed Modi, the butcher of Gujrat to rule over the Muslims through the hands of America. Hizb ut Tahrir would like to remind the Muslims of India that soon after the fall of Khilafah on 28th Rajab 1342 AH in Turkey, the ulema and the Muslims in India were among the first group calling for the re-installation of the Khilafah. They were fully aware that the Khilafah is the only State and the only system for the Muslims and the Khilafah was the only guardian and shield for all Muslims. Hizb ut Tahrir hereby prays that Allah (swt) grants strength and patience to the persecuted Muslims of India and that He (swt) destroy all oppressive regimes and replace them with the Righteous Khilafah State upon the method of the Prophethood.