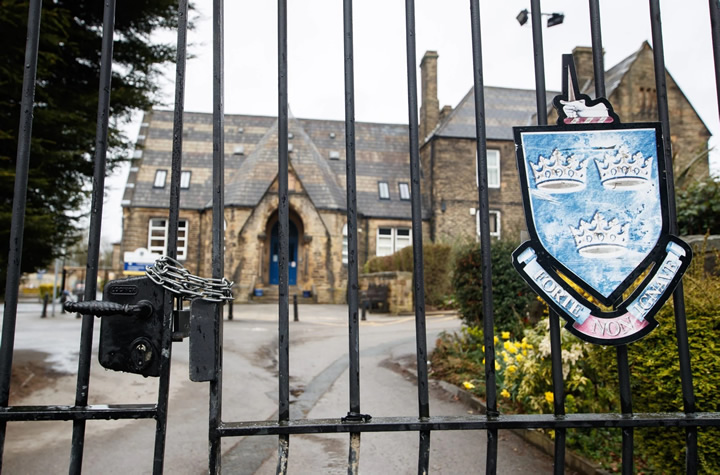 A teacher at a grammar school in Batley, West Yorkshire, has been suspended for showing his RE (religious education) class offensive cartoons of the Prophet (saw). He goaded the students to complain to their parents, which al-Hamdulillah they did, claiming that his British values allow him to be offensive in this way. A number of parents protested outside the school, which has since apologised for the inappropriate resource and promised to investigate the matter.

The British mainstream media wasted no time to insinuate that only Muslim extremists are offended by and oppose such hate-filled mockery of the last and final prophet to humanity. They further insulted British Muslims by reproducing the comments of the anti-Muslim “hate-speech-for-hire” Henry Jackson Society, who only ever add fuel to the fire of intolerance, while never able to defend their extremist secular stance.

Life for ordinary people in Western secular societies is becoming more precarious by the day. The secular capitalist ideology is so obviously failing to provide workable solutions to the many crises that its corruption has caused. The regularity of murderous violence, racial abuse, discrimination and other hate-driven crimes are all symptoms of the false secular creed and its divisive values, fuelled by the message of disdain for immigrants and foreigners that the government and the corporate media have adopted.

The confidence that all Muslims have in the Islamic belief that there is no god but Allah and that Muhammad (saw) is His Messenger, angers the secularists so much that they can only respond with insults and hate-filled rage. They have no such confidence in their own secular ideology. Instead of acknowledging its failings and looking for a better alternative, they make ludicrous claims about its ability to bring people together, or that capitalist greed helps humanity more than it hinders. The RE curriculum has been designed in this light, to indoctrinate children with such blissful ignorance that would make an ostrich proud.

Insulting the Prophet of Islam (saw) is a paper-thin attempt to divert blame for the failure of capitalism, as it is only Muslims today that have an alternative way of life to offer. Rather than throwing hateful abuse at Islam and Muslims, it would be more sensible to consider seriously the message of Islam that the Messenger Muhammad (saw) brought. Islam alone has the solution to humanity’s problems, which is why the corrupt hate-filled secularists oppose it so staunchly.

Islam is the last hope for humanity. Only the Islamic belief convinces the mind and agrees with human nature. Muslims have the responsibility to stand up to the secular bullies, whether they are in schools, the media, nefarious think-tanks and societies, or in government. We must loudly challenge the secular narrative that aims to belittle religion and tarnish the good name of anyone who promotes the true belief in Allah.

We in Hizb ut Tahrir have responded many times to the insults against Islam, Muslims and our Prophet (saw). Most recently we asked “Who is there to defend the honour of Muhammad (saw)?” http://www.hizb.org.uk/media/press-releases/who-is-there-to-defend-the-honour-of-muhammad-saw/