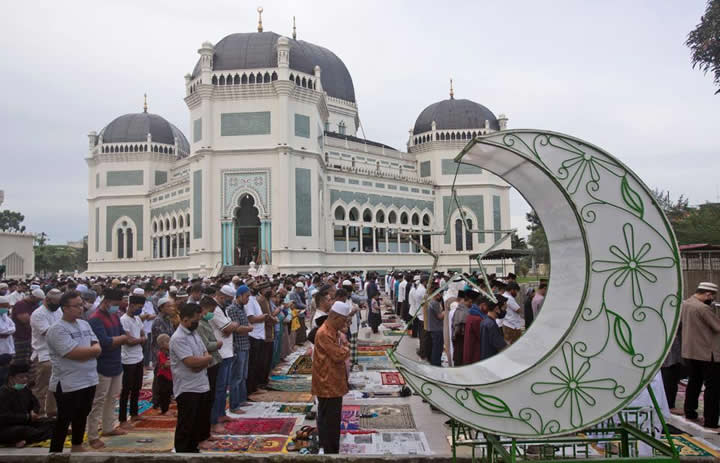 Indonesian Coordinating Minister for Political, Legal and Security Affairs – Mahfud MD – emphasized that acts of terrorism are clearly hated by all religious teachings, including Islam. “Islam is not a religion of terror. 87 percent of Indonesia’s population is Muslim, but if there are terrorists who happen to be Muslims, there are only a handful of people. Islam is a religion of peace,” Mahfud said. Despite being labeled as a terrorist religion, Mahfud said that Islam is a religion that loves peace. This was conveyed in the meeting between the Coordinating Minister for Political, Legal and Security Affairs with religious and community leaders in Surabaya, with the theme “Religious moderation in the perspective of the Ministry” at Makodam V Brawijaya, 17th March as reported by CNN Indonesia and Kumparan. In Indonesia, according to him, in general religious organizations have developed a moderate understanding since the past, so that differences do not become divisions.

Comment:
Yes, Islam is definitely not a religion of terror and Muslims are not terrorists. The narrative labelling Islam with terrorism is one that originates from the West with an unclear and problematic definition. This narrative is exported to various parts of the world to smooth the United States “war on terror” agenda targeting Islam. The choice of the diction of terrorism cannot be separated from some parties who feel threatened by Islam, where the Western world, including its intellectuals, really understand that their ideology is challenged by the existence of Islam.

On the other hand, Mahfud must also be careful in using the terms peaceful and moderate religion, because peace does not mean accepting and submitting to secularism and liberalism which are fundamentally opposed to Islam, just like the point of view of the Islamic moderation agenda, so far. The moderation agenda that exists today has hidden interest to set the religions can co-exist ‘with secular capitalism NOT in the interest of reconciling between religions.So, it’s unacceptable, especially for Islamic teachings.

The rejection of moderation agenda for Islamic teachings in Indonesia also came from Indonesian Muslim intellectuals. In June 2020, at the Muslim Doctoral Forum for the Nation (FDMPB), Prof. Hamid Fahmy Zarkasyi said that moderation agenda in Islam made the Ummah doubt the teachings of Islam, they were not proud of their religion, and constituted syncretism with thoughts outside of Islam. He emphasized this agenda is a form of colonialism of thought to paralyze the awakening of the ummah and weaken Islamic values. In short, according to him, Islamic moderation means weakening the Islamic worldviews.

Islam is a mercy to the universe; its great teachings require that its adherents also become glorious. If the Ummah holds fast to Islam, then it is impossible for them to become the criminal as described by the West. Islamic teachings actually prepare Muslims to become global actors capable of making changes on the stage of world history. The Qur’an has prepared Muslims since the Muslims were very few in number and in a very weak position. The revelation of the Surah Ar-Rum in Mecca happened when the Muslim numbers were still small, weak and persecuted. This letter contains news about the battle between Persia and Rome. When the Qur’an mentioned it, the Arabian Peninsula, neither Mecca nor Medina, was included in the territory of either the Persians or the Romans. Allah (swt) said:

“1. Alif laam Miim; 2. The Romans have been defeated; 3. in a nearby land. Yet following their defeat, they will triumph; 4. within three to nine years. The ˹whole˺ matter rests with Allah before and after ˹victory˺. And on that day the believers will rejoice; 5. at the victory willed by Allah. He gives victory to whoever He wills. For He is the Almighty, Most Merciful.”

What do you think the urgency for this small community, which has nothing to do with Persia and Rome, needs to receive this news? We need to realize that it was the Qur’an’s way of instilling political awareness in the believers at that time. The lesson is that Muslims need to know the dynamics of geopolitical changes around them long before they face them by themselves. The Qur’an has prepared us to become major change maker for the world.

The next few decades after the revelation of Surat Ar-Rum, it was evident that Muslims who were born became a major political power in the world. The Islamic geopolitical order was manifested in the form of the Islamic Caliphate institution for dozens of centuries and even Roman and Persian eventually became part of the Khilafah territorial map.

Muslims who labeled terrorists today precisely incised gold history in terms of sincerity helping the Jewish entity seeking asylum, in contrast to Europe and the United States today magnified build walls borders to immigrants who are weak and expelled. In 1492, under the Islamic Khilafah, Sultan Bayezid II sent his entire naval fleet to rescue 150,000 European Jews who were persecuted by the Christian rulers of Spain during the Spanish Inquisition. They are placed on the lands of the Khilafah, treated as citizens of the Khilafah, and allowed to prosper under Islamic rule.