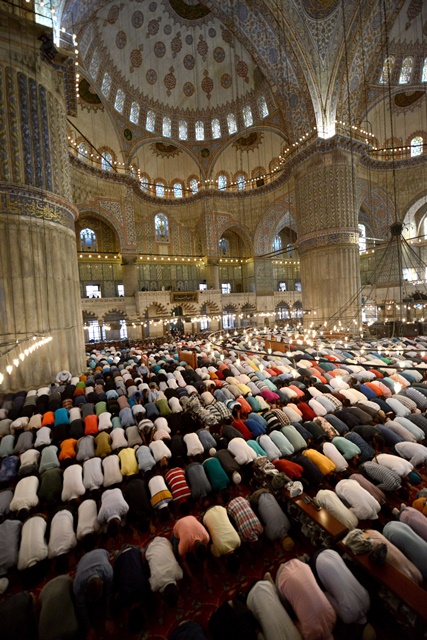 At the end of this sacred Islamic month of Rajab, capitalist and colonial nations after well orchestrated plots and long-term strategies succeeded in destroying the last Islamic State of Khilafah Uthmania (Ottoman Caliphate) with its headquarters in Turkey, an event that reached its climax at the end of Rajab 1342 AH /March 1924 CE.

Destruction of Khilafah led Muslims to suffer a great loss by being ruled over by other than Islam. This distanced them from a vital Islamic obligatory and a sacred worship before their Creator.

Also, they have failed to live under a single, firm shadow (Khilafah state) that unites them as one Ummah regardless of their colours, geographical consideration or lines drawn by colonialists (national borders).

In addition, they have failed to live in peace, tranquility and happiness, and instead live in fear, sufferings, murders, occupations, unnecessary abuses, living without a true advocate and guardian. Above all, Muslims and Islam are being portrayed by western colonial nations especially the United States as enemies of humanity in the world.

As for non-Muslims, destruction of Khilafah deprived them from a golden opportunity of being ruled by Islam. Inspite of the fact that they would not have been forced to embrace Islam. From the implementation of Islam’s ruling, they would have witnessed the strength of Islam interlectualy and practically interms of its fairness, equality and justice. Through that, they also would have obtained an opportunity to distinguish between the modern dictatorship system of secular democracy that excludes religions and relies on manmade systems and laws, from Islamic ruling and system that comply with reality and human nature.

Also, they have failed to live under the state that treats and considers all its citizens on only one basis of citizenship, not religion, race or tribe. As the Khilafah state in history was successful in being able to mould all sorts of people as a single nation without discrimination.

Furthermore, they have missed the opportunity for their religion to be protected, unlike today’s democratic system / capitalism where religion is forced and governed according to democratic whims and demands, to the extent of forcing them to legalize evils and shameful acts such as homosexuality.

In conclusion as for Muslims, they must continue to engage in dawah to re-establish Khilafah Rashidah, targeting to set up a state from one of the large Muslim countries utilizing the methodology of the Prophet Muhammad ﷺ which does not involve using of force, arms or violence.

It is also time for non-Muslims to study Islam deeply and research it as an alternative productive, just and true system, especially since the situation of the world today where capitalism and its political system of democracy has caused huge devastation and miseries to mankind.