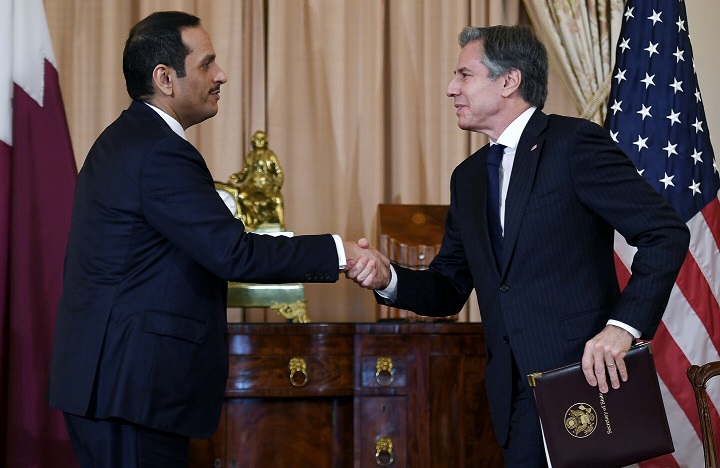 Qatar will establish a U.S. intersection within its embassy in Afghanistan to provide certain consular services and monitor the security condition of U.S. diplomatic facilities in Afghanistan, Blinken said. (news.cn)

Comment:
As with the case with other Islamic countries the leaders of Qatar are servants of West and none of them have any connections with Islam nor they are sincere with Muslims. From Syria to Afghanistan the betrayal of the Qatari leadership from Islam and Muslims is evident as day light, they worked tirelessly to serve the interests of their Master US by playing a role in curbing the sincere revolution in Syria, to help the US in winning the war that it lost against the brave Afghan Mujahedeen on the battlefield via table talks.

In reality the leadership of Muslim countries i.e. Pakistan, Iran, Saudi Arabia, UAE, Qatar etc. have no roots amongst the society rather they are able to cling with the throne by the sheer help of Western systems. In order to protect the Western interest, these rulers do not tolerate any movement or party which exposes the plans of Kuffar that ultimately exposes their relationship with their Western colonial master against Muslims and Islam. And these corrupt morally depleted and defeatist mentality rulers leap to any length to help their Master against Islam. These rulers are often spotted uttering some Islamitized words just to portray to the Ummah that they are with Islam but in reality these rulers are with the Kuffar.

We as a Muslim Ummah need to get rid of this colonial capitalist democratic system and work to establish the system of Islam i.e. Khilafah (Caliphate) otherwise these corrupt agent rulers will make things worse as they keep on serving their Western Master as long as this system remains in authority.