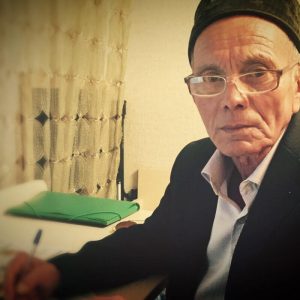 On 17 August 2019 CE, the dear brother, the defender of Muslim rights, Ilmir Imaev, died and his death was tragic and a great loss especially for Muslims of Russia and Ukraine, because he defended their rights and stood against their oppression and persecution until the last hour of his life.

Ilmir Imaev Ansovich was born in 1951 in the city of Petropavlovsk, Kazakhstan, a former Soviet republic. He studied, worked as a photographer and later as a reporter for the City of Inghulia Newspaper in Tashkent Province, writing about the injustice and confronting it. In 1998 he returned with his family to his native country Tatarstan. He lived in the city of Kazan, became a frequent visitor to the community center of Tatarstan. He adopted the idea of nationalism and sincerely wished for the return of the culture of his people.

It was the 2012 arrests that alerted Ilmir Imaev that this campaign was against Islam and its awareness, and to prevent the return of this people to their Islamic origin, since then Imaev became an active and fierce defender of oppressed Muslims. So, he pursued the security agencies with the camera lens, exposing their lies, breaches and violations against Muslims. This led to preventing Imaev from leaving the country by court decision, but this did not stop him and did not prevent him from traveling to Moscow to participate in a press conference, which was about the fabrication of charges against the Muslims of the city of Kestabul, who were subjected to brutal and inhuman torture. Imaev was sentenced to house arrest but they could not prevent him from doing his job, instead he published the scandals of the regime and the security forces online, and was subsequently sentenced to solitary confinement in 2014.

Ilmir Imaev was sentenced in December of 2014 to three years in the city of Kazan at the Vakhitovsky court, where he spent most of his sentence in solitary confinement because of his continued Dawah to Allah. He endured the prison and his torture in Russia’s notorious prisons, he was a preacher of Allah Almighty and an exposer of the Security Services’ practices.

After his release from prison in July 2017, Brother Imaev was given a three-year suspended sentence and restricted his movement, forcing him to travel to Ukraine, where he continued to defend the rights of Muslims in all the countries governed by the tyrants. He has provided many legal advices to the Muslims of Ukraine, where a relative described him as rarely staying at home. Our brother, Ilmir Imaev, sacrificed his time, money, health and deprived himself of a quiet life.

Ilmir Imaev has provided help to all those who needed it from the Muslims of Ukraine, regardless of nationality, school of thought or country. He was always rushed to help a Muslim in need of a consultation or pleading before the court. In the last hours of his life, he was helping and pleading for the blogger, Brother Mahmoud AbdulMomin Khaldarov, making every effort to not be handed over to the Kyrgyz authorities.

We all offer condolences to the family and loved ones of the late Brother Ilmir Imaev, and we ask Allah (swt) to accept his sacrifices, forgive his sins and to place him with the Prophets, Sidiqeen, Martyrs, and the Righteous and those are the best companions.