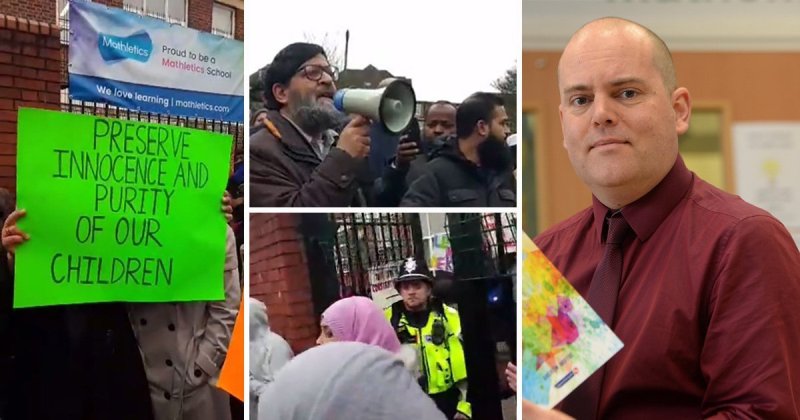 The ultra-liberal agenda to cynically promote sexualisation of children has once again been exposed. It has worn many masks over the years, and today is exploiting those confused about their gender and sexuality, not for the good of society, but as a desperate attempt to avoid addressing the contradictory foundation of emotions that it is built upon.

Parents who have been bullied into silence, for fear of being labelled intolerant, are saying enough is enough. How much more pseudo-science excuses and indoctrination must our young children endure, as the liberal values that the wealthy elite and their cronies destroy the very fabric of society every day? How much more neglect of the family structure must the irresponsible liberal extremists promote, in their quest to capitalise and take advantage of the human misery in their wake?

Desperate to defend their capricious propaganda and use of the school structure to achieve their warped aims, their media machine works to save them from open exposure, with a full pack of lies, slander and misinformation.

Hizb ut Tahrir in Britain celebrates the bravery shown by concerned parents, who resist the sexual indoctrination of their children, which is falsely labeled “open mindedness.” Furthermore, we expose the hypocritical lies that the media stooges are willing to spread about the noble Islamic dawah. On Saturday 16th February, The Times Newspaper deliberately misquoted the leaflet that the Hizb had distributed, despite having full knowledge of its real content. We encourage all Muslims in Britain and other citizens who are concerned for the truth to expose such blatant lies that are spread by the media to conceal the true extent of failure of liberal democracy to look after the affairs of the people.

The Times article contained the lie: “Yesterday it distributed leaflets to mosques around the country stating that teaching children to have an open mind is as dangerous as “giving a child a gun.” While the leaflet actually stated “Children are being taught to be ‘free’ sexual beings – but told not to harm themselves or others. It is like giving a child a gun and saying ‘don’t harm anyone’, ‘control yourself’, ‘be responsible’ – and then ignoring the consequences! Encouraging hypersexualised relationships and attitudes to others, experimentation and divergence from biological norms – reinforces unhealthy attitudes towards others, creating a mess of contradictions and dysfunctional attitudes in society.”

Ours is an intellectual objection to the forced indoctrination of the young with the slogan of “freedom” which inevitably gives rise to irresponsibility that the whole society then has to endure.

Our objection to the hyper-sexualisation of the young is not a crude emotional reaction, which is the true foundation of secular liberal thought, but a reasoned response built upon a rational belief in the Creator who guided mankind to control their desires, and not let them run wild.

The Trans part of the LGBT movement is a step too far for most reasonable people, leading them to question the foundation of the freedom and tolerance slogans, and expose the cynical motivation to exploit the vulnerable for personal gain.

The Muslims have witnessed centuries of divide and conquer tactics employed by the British colonial class, so it is not surprising that the Muslim community in Britain is particularly aware of and ready to expose the deceitful campaign to divide us with the meaningless labels of intolerance and extremism. When they single out to vilify imams, personalities, mosques and schools in our community, we are no longer phased by these old tired tactics.

As is now obvious to all, liberal ideas and whims cannot withstand scrutiny or a robust debate; hence the need comes for its ardent fanatics to bully. But, the Muslim community will not be bullied into a corner.

We hold a belief that does not contradict our values. In Islam, children are treated with love, compassion and mercy; they are not sexualised by a cynical but powerful marketing lobby whose motto is “sex sells” and sees no evil in extending that to children as young as four.

For Muslims, a woman is an honour and afforded dignity not a mere play object in the hands of selfish men, as the #MeToo campaign has exposed.

In Islam procreation is the role of the family unit, having both a father and mother to live and guide their children. This is the healthy and natural foundation for a society to be built, despite the incoherent ranting of the ardent liberalists who do not see nor care about the decadent state that society is fast becoming.

But most of all, Muslims have a responsibility to stand up for the right and speak out about corruption wherever it may occur. Liberal capitalist societies have proven themselves to be riddled with corruption and weakness, for which Muslims hold onto the cure.

Islam has the alternative that the masses of oppressed people in the world are crying out for. It is the duty and responsibility of Muslims to stand up to expose the deliberate demonisation of Islam and Muslims, which is only serving the agenda of the irresponsible political elite for their own selfish benefit, regardless of the dire consequences for the rest of mankind.