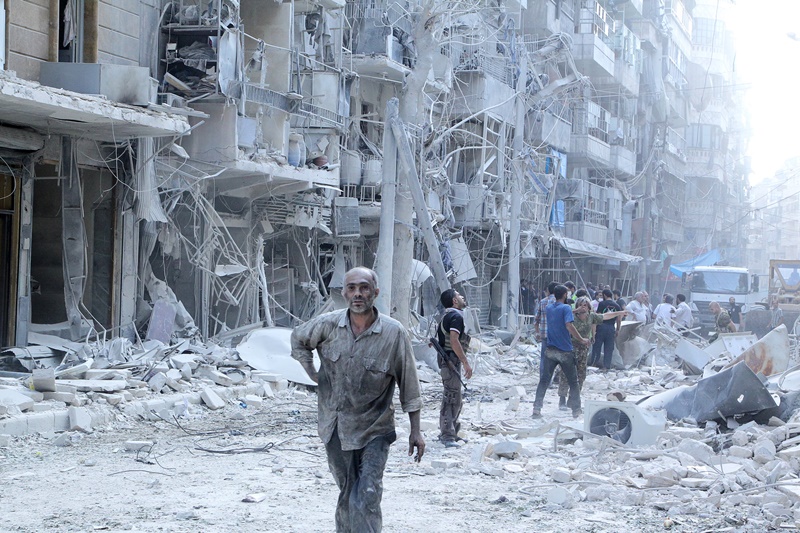 If it vanishes, the good will disappear from them and then they will see only humiliation

Then they will be like the Jews or the Christians, they both have lost the way!

These verses were read out by the companion Hanzallah the writer, in the sedition (fitnah) that preceded the death of Othman bin Affan may Allah be pleased with him. It is as if he was describing our days where Muslims live in distress and misery, and oppression and humiliation, and dispersion and loss. Their money is plundered, their country is usurped, their blood is spilled, and their honour is violated. Ruwaybidha (ignorant) rulers were appointed over them with scholars who worship dirhams and dinars (money), they have lost the way, and led those after them astray.

But the difference is that when Muslims heard these verses, they still lived under the Khilafah for thirteen centuries, despite the sedition and setbacks, but they remained within the fortress of the Khilafah. They opened the countries and spread the light of Islam. Over the years, the Ummah has delivered leaders and great caliphs such as Salahuddin, Muhammad al-Fatih and Abdul Hamid, may Allah have mercy on them all.

These leaders, these caliphs, who worked throughout their lives to preserve the limits of Allah, and to take care of the Muslims by the laws of Allah, they made history by their concern for the dignity of the Ummah and its people. There are many stories regarding this aspect, to show that the Khilafah has protected the blood of Muslims, and valued it.

Allah (swt) has honoured the Muslim, and made his blood sacred. On the authority of Abu Sa’eed Al-Khudary and Abu Huraira from the Prophet ﷺ that he ﷺ said: «لو أن أهل السماء وأهل الأرض اشتركوا في دم مؤمن لأكبهم الله في النار» “If the people of the heavens and people of the earth join together to spill the blood of the believer, Allah will throw them in Hellfire” [Tirmithi]

Allah (swt) made the Muslim blood more sacred than the Kaa’ba.

These Shariah rules were understood by the Muslim caliphs and they implemented them, they viewed looking after the affairs of the Muslims as a great matter and carried its responsibility as a trust from the Messenger of Allah ﷺ. That is why the Muslim armies moved, and declared war immediately when any Muslim was hurt whatever it may be. Amoriya was opened in response to protecting the honour of a Muslim woman, and Al-Hajaj moved his army to Samarkand to support 18 ships that were sailing to Iraq. They were attacked by pirates. The result of saving them resulted in opening the whole of the Sindh land, and spread Islam there. This was done by the Muslim leader Muhammad bin Qasim al-Thaqafi, the cousin of Al-Hajaj and the commander of his army.

Ibn al-Atheer wrote in his book “Al-Kamil fi At-Tarikh” and Ibn Katheer mentioned in “Al-Bidayah Wa Anihayah” the events of the year 463 AH: “The Roman king Armanus came out in hordes like mountains, more than two hundred thousand … with a thousand and four hundred wheels and carts carrying arms and catapults. He was determined to exterminate Islam and its people and vowed to do so. Muslim were in fear but Allah sent to them Sultan Alp Arslan who fought them with twenty thousand men only. The preachers of the mosques urged Muslims to make dua in the Friday prayers for the Mujahedeen. The battle ended with the defeat of the Romans, an overwhelming defeat in which the commander of the Romans was captured. He was brought to the Sultan who ordered that he should be sold in the camp of the Muslims. So they took him around the camp with a rope around his neck, his price was called out in dirhams and the filses, but no one bought him. In the end, at the end of the camp a man said: If you exchange him for this dog, I will buy him. So they took him and the dog to the Sultan Arslan, and told him what they did and what he was exchanged for, the Sultan said: the dog is better than him because it is beneficial, but he is of no benefit” (liberal quoting)

Yes, these deeds, full of pride and domination, will be the answer to whoever thinks of harming any Muslim. This is what we miss in the absence of the Khilafah. There are no armies that defend the Ummah; despite their numbers and weaponry and the billions of dollars spent on them each year, they are restrained and used in killing and slaughtering of Muslims.

In the absence of the Khilafah, Muslim blood is cheap and the shedding of our blood is a way to entertain the declined, the low and extremists in each party. Last month, 1,500 Muslims sought refuge in a church complex in Central Africa to protect them from killing of Christian gangs. We began to seek protection in churches in the absence of the Khilafah. That was our situation then and where is it now?!

Yesterday, the hatred of America led them to kill 150 children of the memorizers of the Qur’an in Afghanistan, and Russia committed a massacre against the Muslims in Ash-Sham, killing dozens of them in a chemical attack in Douma, and both criminals committed their crimes against Muslims because they believed that the Muslims have no protector, the Imam, the shield, the protects and is fought from behind is absent. The Ummah are ruled now by sheep that tread the American line, and all their movements are part of the war on the best Ummah.

Yesterday the Tunisian police pursued a young man until he threw himself in the valley, and when he cried for their help they shouted at him, “Learn to swim,” he died drowning!

In Egypt, dozens of people are sentenced to death every day unjustly, to instil fear and humiliation in the hearts of the Muslims of Egypt, and to force them to accept the criminal regime of Sisi.

In Palestine, Muslim youth are pushed into unfair confrontations with a hateful, criminal entity that easily targets them with their lethal weapons. And the rulers of the Ummah and its scholars and media are silent like the silence of the dead regarding the radical solution that liberates Palestine and saves its people from the oppression of the Jews, but they encourage popular movements that put the people of Palestine the prisoners in confrontation with the army of the Jews and hand them over to them like sheep fighting the wolves!

The rulers are preoccupied with arresting the sincere Muslims and cutting off their livelihoods and harassing every free and sincere, leaving the Ummah an easy target to satisfy its enemy, to tear it apart and torture it however they like.

If the Muslims had a Khilafah (caliphate) and a caliph, none of the Kuffar would have dared to kill a Muslim or violate the honour of a Muslim.

“Indeed in that is a reminder for whoever has a heart or who listens while he is present [in mind].” [Qaf: 37]