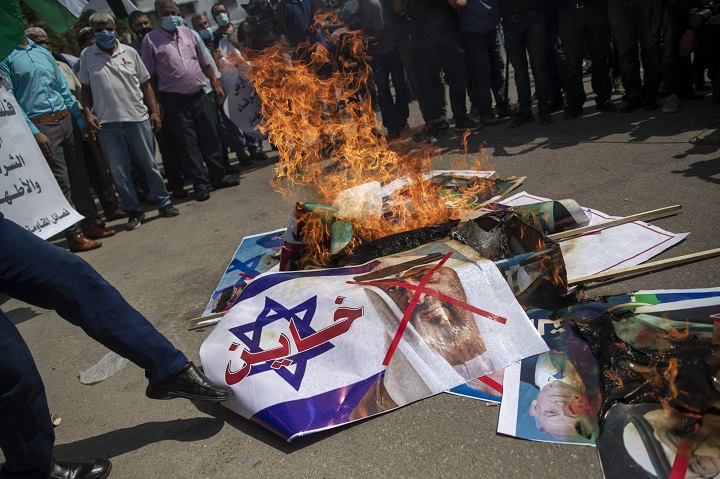 After the destruction of the Khilafah (Caliphate) in 1924 and the implementation of the Sykes-Picot agreement resulting in the division of Muslim lands, the political dynamics of the Muslim lands has always been in the trajectory of Britain and America. America joined later in the game and have been getting the piece of the pie since its emergence as the super-power post World War 2. The treacherous agents who rebelled against the Uthmani Khilafah were rewarded with the divided remnants of the Khilafah in return for their continuous alliance with these powers and fulfillment of their interests. The recent normalization process that started from the year 2017 between the illegal Jewish entity and some of the Arab nation states is taking the treachery to the next level.

The Munafiqeen at the time of the Prophet (saw) called for a similar “normalization” process with the treacherous Jews. At many instances, it was the hypocrites who pleaded with Rasoolullah (saw) for the Jews to treat them with kindness and respect in spite of their clear defiance, rebellion and treachery against the State. The hypocrites maintained a good relationship with the Jews in spite of their antagonism towards the Muslims and the State. Allah (swt) says about the hypocrites:

‘When they meet the believers they say, “We believe.” But when alone with their evil associates they say, “We are definitely with you; we were only mocking.”’ [2:14].

The treachery of Banu Qaynuqa and the hypocrites

After Badr, the Jews of Banu Qaynuqa started their mischievous acts against the Muslims and the State. They began to challenge the authority of the State and repeatedly violated the terms of the treaty which they had signed with the Prophet (saw). The mischievous Jews replied in arrogance to the Prophet (saw) when he warned them. They said “O Muhammad! Do not depend on your victory against the people who did not know how to fight. If you dare to fight us, you will see what kind of men we are.” Such a statement was clearly an act of rebellion and sedition.

The height of such treachery was the dishonoring of a Muslim woman in the market causing a feud between a Muslim and a Jew. This resulted in the killing of the Jew by the Muslim. This was followed by the Jews of Banu Qaynuqa uniting and killing the Muslim.

Rasoolullah (saw) besieged them for their continuous treachery in their fortresses and decided to kill them all for their treachery. It was Abdullah ibn Ubayy ibn Salul, the head of the Munafiqeen, who interceded for them with the Prophet (saw) till he decided not to kill them and instead ordered for their exile from Madinah. Ibn Ubayy said to the Prophet (saw) “O Muhammad! Be charitable to my allies”, and he persisted in this request and caught hold of the Prophet (saw) till he responded to his request. Ibn Ubai said to him (saw): “Verily, I am indeed a man who fears catastrophes (if I do not stand alongside my allies).”

Rasoolullah (saw) ordered Ubaadah to carry out the process of forcing Banu Qaynuqa out of Madina and he was very harsh with them to the point that he did not give them even an hour extra time for them to vacate even after they requested for some time. It was in this context Allah (swt) revealed these ayaat:

“O you who have believed, do not take the Jews and the Christians as allies. They are [in fact] allies of one another. And whoever is an ally to them among you – then indeed, he is [one] of them. Indeed, Allah guides not the wrongdoing people.” [5:51].

“So you see those in whose hearts is disease [i.e., hypocrisy] hastening into [association with] them, saying, “We are afraid a misfortune may strike us.” But perhaps Allah will bring conquest or a decision from Him, and they will become, over what they have been concealing within themselves, regretful.” [5:52].

The Treachery of Banu Nadir and the hypocrites

Another Jewish tribe that showed their treachery after the Battle of Uhud was Banu An-Nadir. They violated many articles of the treaty with Rasoolullah (saw) and allied with the enemies. They even went to the extent of planning to kill the Prophet (saw). Due to their continuous treachery, Rasoolullah (saw) ordered them to be exiled from Madinah and gave them ten days to leave the city. He (saw) sent Muhammad ibn Maslama to give the order of the expulsion. Muhammad ibn Maslama (ra) was a member of the Aws tribe, which was an ally of Banu Nadir before Islam. The Jews on receiving the order said to him: “Oh Muhammad, we never thought that a man from the Aws would bring us such an ultimatum!”. He (ra) responded: “Hearts have changed, and Islam has erased past covenants.” Such a response cast terror into the hearts of the Jews of Banu Nadir. When the Jews were preparing for their departure during the time allocated for them, Abdullah Ibn Ubai contacted them and spoke to them words of encouragement which rejuvenated their morale, strength and rebellion. Ibn Ubai asked them to defy the order and fortify themselves. He also promised his support to them in case of any fighting to the extent that he and his followers would die for them. Allah (swt) exposed their treachery in this incident by revealing the ayah:

“Have you not considered those who practice hypocrisy, saying to their brothers [i.e., associates] who have disbelieved among the People of the Scripture, “If you are expelled, we will surely leave with you, and we will not obey, in regard to you, anyone – ever; and if you are fought, we will surely aid you.” But Allah testifies that they are liars.” [59:11].

The actions of the Hypocrites and its relevance today

The hypocrites were recognized through their clear actions and not what was in their hearts. Abdullah ibn Ubai was rebuked by the Sahabas for his actions and stances in various situations which contradicted the clear commands and concepts of Islam. Al-Wala wal-Baraa of the hypocrites was to the enemies of Islam and Muslims. The alliances of Jahilliyah was given the primary importance by them. If Ibn Ubai were present today, his actions would be no different from those of the current Muslim rulers.

Wars have been fought by the current rulers of the Muslim world to fulfil the interests of America and Britain like the Gulf War, Saudi-Yemen War and the war in Syria and Libya. The great strength, resources and military power of the Ummah are at display in these proxy wars fought on behalf of these powers, but on the contrary, the response is mere lip-service when it comes to defending Islam and Muslims. Defending the Nation state based on the false ideas of Nationalism and the sovereignty of the nation state are given primary importance. And the justification for such a hypocritical stance is the same as that of the hypocrites in Madinah i.e., the fear of the repercussions from the enemies of Islam.

The Jewish entity was originally a British project following the mandate given by the League of Nations to the British after the dismantling of the Ottoman Khilafah post World War I. During that time, the agents rulers surrounding Palestine, who were rewarded their respective territories for their rebellion against the Ottoman Khilafah, have always protected and supported the interests of the British in the region. Post World War II, America hijacked most of these agents and imposed its interests and policies in the region. Maintaining this British project has always been America’s agenda as clearly stated by Joe Biden “If there were no Israel, we would have to invent one”.

The aggressions and crimes of the Jewish entity has been dealt with impunity by these agents in spite of these countries possessing considerably much greater military strength. The 1967 proxy war by Egypt, Jordan and many of the surrounding Muslim countries was a fake war fought to project the Jewish entity as a powerful State. This was followed by signing of peace treaties by Egypt and Jordan in 1979 and 1994 respectively. The recent step towards legitimizing this entity is the current formal normalization process with UAE, Sudan, Bahrain and Morocco. Though such a “normalization” process has been secret for decades through the intimate relationship of these countries with the Jewish entity, the current open and formal normalization agreements can be seen as a new low of treachery by these agent countries.

‏The Prophet (saw) said, «لِكُلِّ غَادِرٍ لِوَاءٌ يَوْمَ الْقِيَامَةِ يُرْفَعُ لَهُ بِقَدْرِ غَدْرِهِ أَلَا وَلَا غَادِرَ أَعْظَمُ غَدْرًا مِنْ أَمِيرِ عَامَّةٍ» “Everyone who breaks a covenant will have a flag by his buttocks on the Day of Resurrection. It will be raised higher according to the nature of his breach. Behold, there will be no greater a sin with respect to breaking the covenant than that of a ruler who breaks his covenant with the Muslim masses.” [Muslim]

These rulers stand in the way of the re-establishment of the Second Righteous Khilafah and the unity of the Muslim lands. They stand in the way of utilizing the Muslim armed forces in the liberation of Palestine and preventing the oppression of Muslims all over the world. There is no hope in these rulers because of their continuous treachery, the first and unforgivable treachery was the rebellion against the Ottoman Khilafah so it is incumbent that the change comes from those sincere people who hold the reins of power in the armies. These rulers ally with the enemies and wish to fail the project of the Khilafah, but this project will succeed as Allah (swt) has promised the victory to the believers and the failure of the plots of the Munafiqeen and their allies.

“But all honour and power belongs to Allah, His Messenger, and the believers, yet the hypocrites do not know.” [63:8]