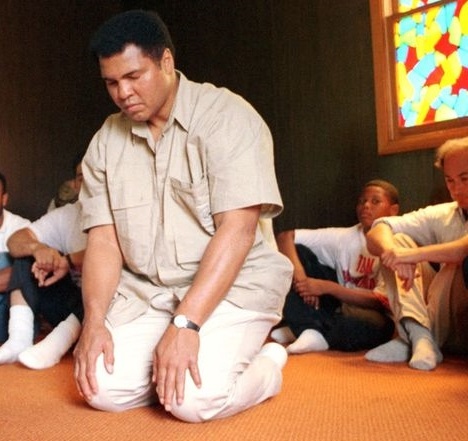 Dr Mohammad Malkawy tells us of a Jum’ah Khutba he gave in Chicago, sometime between 1988 and 1991, in which Muhammad Ali was one of the attendees:

“I met Muhammad Ali in Masjid Al-Faatir, which is located on E 47th street in the south of Chicago. After listening to the Jum’ah Khutba that I gave he waited for me after the Salat to speak with me. The khutbah was about the fact that Islam is the only ideology capable of solving poverty and racism, and of liberating mankind from worshiping each other, transferring them to worshiping the Creator.

Muhammad Ali approached me and asked me if he can help this call if it needed help. He was surprised when a member of Hizb ut-Tahrir – a brother whom Allah had given excellent presence of mind – stepped forward and said ‘Yes, champ, we need your help. We need you to spread to the Muslims the importance of working to resume the Islamic way of life and re-establishing the Khilafah, which will liberate the Muslims around the world.’ Muhammad Ali then asked ‘Can I help by donating money.’ The brother answered, ‘No, we do not want money.’ Muhammad Ali then said, ‘This is the first time in my life that anyone has asked for help for an Islamic cause that was not money. This makes me very happy.’”