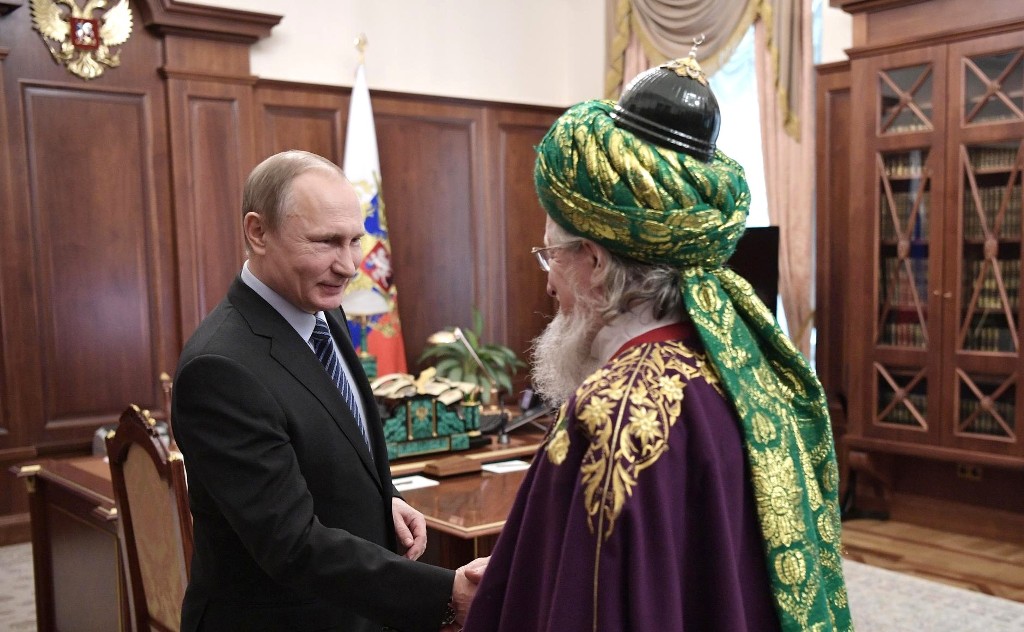 In Russia, a vote on amendments to the Constitution was held. The aim of these amendments is to extend the term of Putin’s rule, and all other amendments are intended only to mask this goal. The chairman of the Central Spiritual Administration of Muslims of Russia Talgat Tadzhuddin called on Muslims to vote in support of these amendments:

In any state there must be a law. There is God’s law, but there is a law that people accept. The law adopted by people needs to be amended. It dictates reality, modern life. A believer, thinking about his future generation and wishing it happiness, must undoubtedly go to the vote”.  According to him, “this is our country where we live, where our ancestors lived for centuries and descendants will live,” and therefore, “it is necessary to come and cast your vote for the amendments to the Constitution. We need to participate in the life of the country.”

The Chairman of the Central Spiritual Administration of Muslims of Russia addressed this issue to the Muslims of Russia and, first of all, to the Muslims of Tatarstan and Bashkortostan, who, are occupied by Russians since the reign of the Russian Tsar Ivan the Terrible from the middle of the 16th century to the beginning of the 17th century about the Gregorian (miladia) calendar. Since then, the Muslims of Tatarstan and Bashkortostan have been ruled by the disbelieving occupiers, which Tadzhuddin did not mention. So, voting “for” or “against” the introduction of the various amendments to the constitution of a disbelieving occupier is a recognition of the legality of its constitution, and therefore of its power and its occupation. And this is – instead of striving to free from the disbelieving occupation, or at least to call for a complete refusal to cooperate with and submit to it, to call for a refusal to recognize its authority, his constitution and laws.

The Chairman of the Central Spiritual Administration of Muslims of Russia also did not mention that in general the participation of a Muslim in the vote on the adoption of any secular laws or constitutions invented by people, or any amendments to them, is a serious sin, the recognition of secular laws as such, the recognition of the human right to legislation and amending them, which is the exaltation of a man, giving him the right of Allah, for only Allah has the right to legislation. Therefore, participation in such voting is prohibited under the Shariah law and is a serious sin.

And this, not to mention the fact that the true purpose of the amendments to the Constitution is to preserve Putin’s power, and with him the FSB, which became famous for anti-Islamic politics and legislation, the prohibition of Islamic literature, the prohibition of wearing a hijab, the policy of the genocide of Muslims in the Caucasus, and repressions against Islam and Muslims, and not only within Russia, but also abroad, such as the genocide of the people of Syria and the imposition of the power of dictator Assad and the secular constitution on them.

In addition, these amendments to the Constitution “legitimize” the second-rate status of all occupied by Russia, including Muslim peoples, and as a result, the “second-rate” nature of their cultures, languages, as now only the “Russian people are state-forming”.

Calling not only to vote, but also to vote “for” support for such amendments to the Constitution, the official clergy reveals its essence and purpose, for which the first Spiritual Administration of Muslims was created – to legitimize the Russian authorities in the eyes of the occupied Muslim peoples and gradually assimilate them by refusing from their religion, culture, language.

The Central Spiritual Administration of Muslims of Russia was established by Decree of the Empress of the Russian Empire Catherine II of September 22, 1788. Its official opening took place on December 4, 1789 in Ufa. It was created at the request of the Ufa governor O. A. Igelstrom as a state institution for the “testing” of clergy and selection among them “trustworthy” for the Russian authorities.

According to Thawban, may Allah be pleased with him, that the Prophet ﷺ said: «إِنَّمَا أَخَافُ عَلَى أُمَّتِي الْأَئِمَّةَ المُضِلِّينَ» “Truly, I am afraid that in my community there will be the imams misleading people!” (Tirmizi).