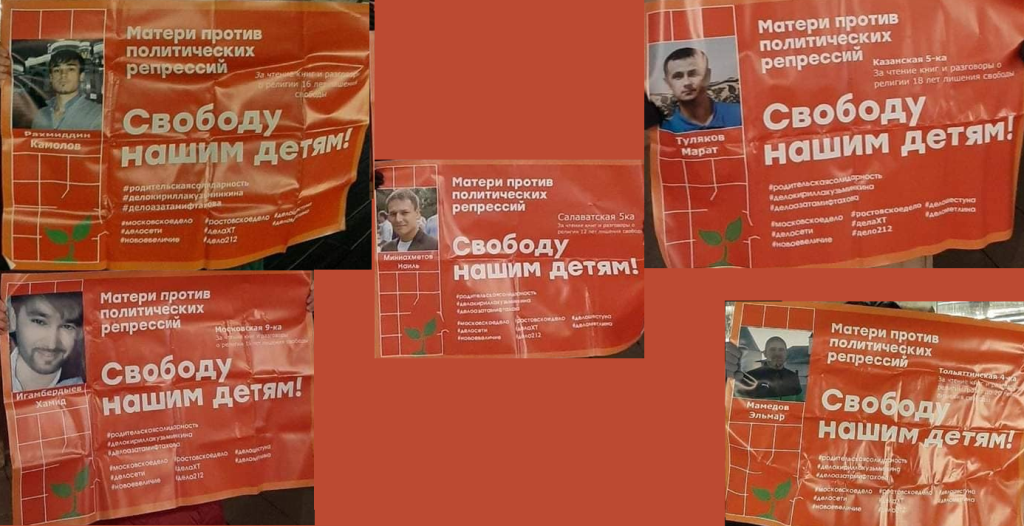 On the 7th of December 2019, relatives and friends of political prisoners from different cities of Russia met in Moscow in the Memorial Human Rights Center building. The biggest part of all the participants were mothers of the arrested members of Hizb ut Tahrir. The same day mothers went to solitary pickets throughout the city and even near the walls of the Moscow Kremlin. Parents stood at a picket near the Kremlin walls for about half an hour, after which some of them  were detained.

Recall that earlier, on November 4th, mothers of the accused in various political processes united in the large-scale organization, Mothers Against Political Oppression. This organization included the mothers of the defendants in the nine most high-profile political cases: from the Network and The New Greatnesscases to the Rostov case and the Hizb ut Tahrir case.

It should be noted that a new stage in covering the oppression of Hizb ut Tahrir members began when the mothers of the prisoners began to unite and oppose the oppresion of their sons. Now many Russian media outlets are eager to tell the families’ stories, show the absurdity of accusations Hizb ut Tahrir in terrorism, although this was a rarity before. Along with the activities of the mothers of the prisoners, a work group is also conducting work under the auspices of the human rights ombudsman Moskalkova: they are considering on what grounds Hizb ut Tahrir was recognized as a terrorist organization, and also for what reason it turned out that party members are sentenced to up to 24 years of imprisonment in fact for reading books and discussing them with co-religionists.

At the same time, the FSB is not idle and is trying as much as possible to maintain the status quo regarding reprisals against Hizb members, because this agency has become rich from these criminal cases. Just not long ago, on the 18th of November party members were arrested in Tyumen, Kazan and Moscow, as a new wave of arrests took place in Moscow and Chelyabinsk on the 5th of December: in Moscow – immigrants from Central Asia  Farhodjon Kimsanov, Marifjon Mamadaliev, Ikbolzhon Sultonov, Ikromiddin Tukhtasinov, Gulomzhon Kholdarov, Azizbek were arrested in Moscow Kholmatov and Marufjo Maliko; and in Chelyabinsk – local residents Ilfat Galimov and Rustam Halikov.