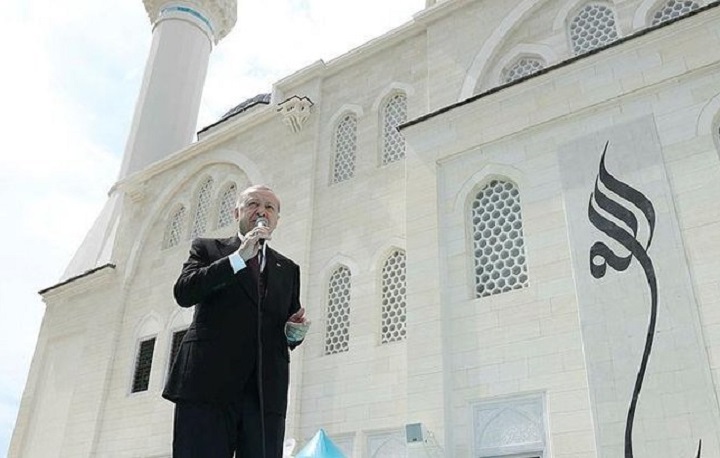 President Recep Tayyip Erdogan attended the opening of Uzun Mehmet Mosque in Zonguldak. In his opening speech, he stated: “What is a mosque? Place where we gather. Muslims gather in the mosques, they become united…” (Agencies)

Comment:
It is true that President Erdogan describes mosques as a gathering places. At least it fits the description of the mosque. As it is known, there are “truths” that can be encountered in every wrong/wrong person, like a stopped clock. Based on the accuracy of these words of Erdogan, to accept all that is said and done correctly; despite the fact that it is corrupted, the clock that shows the truth twice a day is actually(!) no different from claiming to be “a healthy/accurate watch.” For him, the fact that some of the words spoken are true, does not prevent the speech from shortcomings or mistakes, nor should it be an obstacle.

Mosques are one of the pillars of Islam. Mosques are not only a gathering place, but also blessed places where good is invited, the commandment of amr bil maruf and nahyi ‘anil munker (calling for good and forbidding the evil, respectively) is fulfilled and the Deen of Allah is glorified. If a lot of mosques are opened, but the word of truth is not spoken in it, or nothing about the truth is told, this is than a contradiction and contrary to the spirit of the mosque.

On one hand, mosques will be opened and preaching stating that interest is forbidden are carried out, but on the other hand, the same preaching will not be addressed to the democratic secular state, which sees interest as the reality of the world and accepts it as indispensable for economic policy.

Again, in Friday prayers, fatwa has been given that the lottery and gambling are forbidden, especially for the New Year, but on the other hand, nothing has been said in the same khutbah addressing the secular democratic state/order, which has offered the society to buy about sixty million National Lottery tickets.

But on the other hand, the same preaches will not be uttered against a state that charges taxes on prostitutes with pictures and decriminalize adultery in accordance with the European compliance laws of 2004…

The fatwa that alcohol is forbidden has been published or the sermons has been issued from time to time, but on the other hand, no any statement has been made to the regime itself.

If the words of truth are not going to be uttered in the mosques, what is the reason for opening that much mosques than?

In the mosques only Allah must be the matter of fact.
It must be the pillars of Islam and its values that must be peached.

No any munkar is allowed to be taught in the mosques. So, any other idea remote from Islam is considered as munkar, and is prohibited to be situated in the mosques.

In short, if many mosques are opened to provide Muslims for prayer, then the words of truths must also be raised from its mihrab. If the truth is not uttered on the chair of Prophet Muhammad (saw), then all you have said are insincere.

As in everything, may Allah guide us into His path in this matter and bless us the Islamic life in which the mosques are gained their righteous value by the Khilafah State (Caliphate).