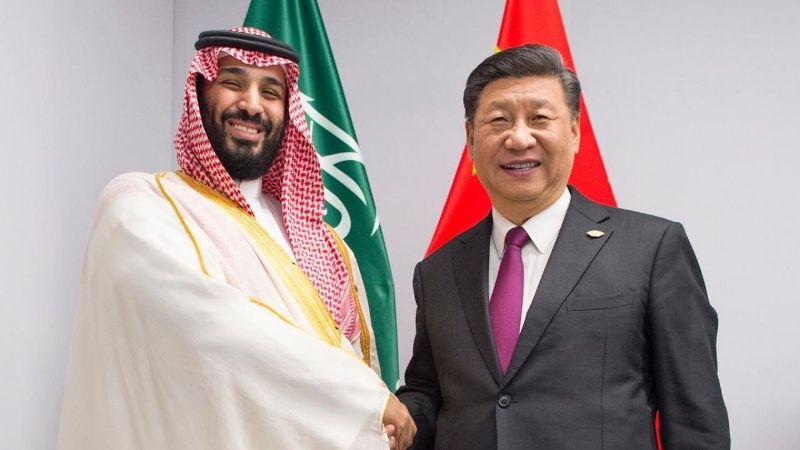 “The worst of rulers are those who treat their subjects harshly.”

Mohammad Bin Salman seeks various ways to stay in power no matter what it requires of betrayal to Allah and His Messenger and the believers. After being exposed in the murder of journalist Jamal Khashoggi and the rising number of calls for his accountability and his removal from office, he took several steps to prove his allegiance to the colonial West. Inside Saudi Arabia, he opened the door widely to an intensive campaign to spread obscenity and immorality, under the guise of promoting tourism and entertainment, and brought singers and artists of vice from the Arabs and non-Arabs to perform immoral concerts, at the same time, he detained hundreds, rather thousands of Muslims in prisons.

Bin Salman is working hard to boast his image before the international public opinion, this is by signing trade deals with many countries in a bid to spread the message that the work is proceeding to achieve his project called “Vision 2030”. After the assassination of Khashoggi had cast its shadow over the Saudi Investment Conference (on 23/10/2018, dubbed Davos in the Desert, it lost its luster due to the withdrawal of many international dignitaries and businessmen), he went on a tour of Pakistan, India, China and Indonesia, that witnessed the signing of many deals worth tens of billions of dollars.

In his visit to China, Bin Salman not only signed the deals but gave the Chinese authorities the green light in their brutal campaigns against the Uyghur Muslims in East Turkestan (Xinjiang). The New York Times quoted the Chinese television channel (CCTV) saying that Bin Salman said during his meeting with Chinese President Xi Jinping: “China has the right to take anti-terrorism and de-extremism measures to safeguard national security.”

While the international media have condemned China’s crackdown on East Turkestan’s Muslims, Ibn Salman’s statement justified these brutal crimes. Thus, he proved himself to be a partner of the Chinese authorities in their crimes, and testified against himself that he is from the Sufaha’ (impudent) who the Messenger of Allah ﷺ warned of them. It was narrated that Jaber bin Abdullah said: the Prophet ﷺ said to Ka’b ibn ‘Ajra:«أَعَاذَكَ اللهُ مِنْ إِمَارَةِ السُّفَهَاءِ». قال: وَمَا إِمَارَةُ السُّفَهَاءِ؟ قال: «أُمَرَاءُ يَكُونُونَ بَعْدِي، لَا يَقْتَدُونَ بِهَدْيِي، وَلَا يَسْتَنُّونَ بِسُنَّتِي، فَمَنْ صَدَّقَهُمْ بِكَذِبِهِمْ، وَأَعَانَهُمْ عَلَى ظُلْمِهِمْ، فَأُولَئِكَ لَيْسُوا مِنِّي وَلَسْتُ مِنْهُمْ، وَلَا يَرِدُوا عَلَيَّ حَوْضِي، وَمَنْ لَمْ يُصَدِّقْهُمْ بِكَذِبِهِمْ، وَلَمْ يُعِنْهُمْ عَلَى ظُلْمِهِمْ، فَأُولَئِكَ مِنِّي وَأَنَا مِنْهُمْ، وَسَيَرِدُوا عَلَيَّ حَوْضِي…» “May Allah protect you from the leadership of the Sufaha’ (impudent)” he said: what is the leadership of the Sufaha’? He said: “They are leaders after me, they do not follow my guidance, and do not adhere to my Sunnah, whoever believes them in their lies, and aid them in their oppression, these are not from me and I am not from them, and they will not come to my Hawdh, and those who did not believe them in their lies, and did not aid them in their oppression, they are from me and I am from them and they will come to my Hawdh.”

O our People in the Land of Revelation:

The description in this Hadith fits this Safeeh (impudent) man:

It is clear to you now that you see Bin Salman, with the approval of his father, who appointed him over you and is his partner in crime, hastens in showing his loyalty to the West, and spend the Ummah’s wealth to please the leaders of Kufr who oppress and torment your brothers in the Deen. You should not be silent about his crime and disappointment against your brothers in Turkestan (Xinjiang). Rather Islam obliges that you denounce him and work to remove him, and purify the land of revelation from his filth and his gangs. The Shari’ obliges you to support your brothers in the Deen in East Turkistan as those in Palestine, Kashmir and other Muslim countries. We remind you of his ﷺ saying: «سَيِّدُ الشُّهَدَاءِ حَمْزَةُ بْنُ عَبْدِ الْمُطَّلِبِ، وَرَجُلٌ قَامَ إِلَى إِمَامٍ جَائِرٍ فَأَمَرَهُ وَنَهَاهُ فَقَتَلَهُ» “The master of the martyrs is Hamza ibn Abdul Mattalib, and a man who stands (in front of) an oppressive ruler and enjoins the good and forbids the evil and so is killed for it.”

So observe your obligations and trusts in the Deen, your honour is by being the best nation brought to mankind who call people to the good and forbid the evil, in this is your success and glory in both worlds.