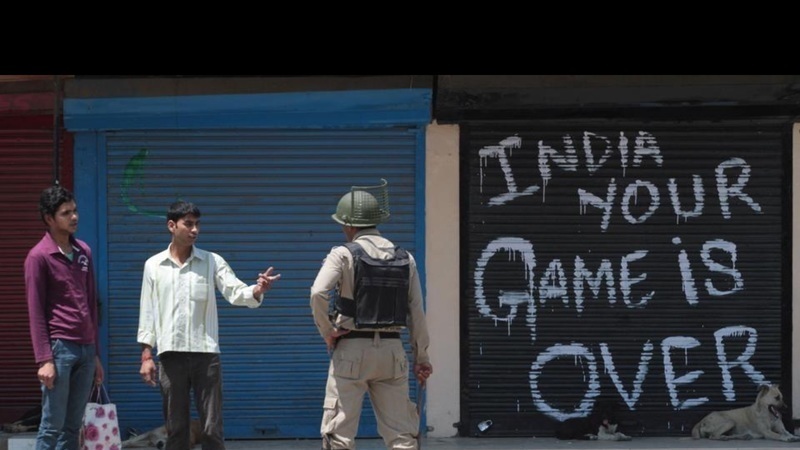 It is the Time to Mobilize the Lions of Pakistan’s Armed Forces to Liberate Occupied Kashmir, not to Invite Trump to Mediate in Talks with his Ally, Modi

Whilst the belligerent Hindu State flooded Occupied Kashmir with more of its ruthless troops and cruelly rained cluster bombs on Azad (Liberated) Kashmir, shredding the bodies of innocents to pieces, the visionless leadership of Pakistan appealed to its master, Trump, to mediate in talks with the butcher of Gujarat, Modi. On 4th August 2019, Imran Khan tweeted insistently, “President Trump offered to mediate on Kashmir. This is the time to do so.” Thus, when it is high time to mobilize the willing and capable lions of Pakistan’s armed forces to deliver the death blow to the collapsing Indian occupation of Kashmir, as it faces a massive popular uprising that it has no hope of overcoming, Pakistan’s spineless leadership instead strives to crush the rights of the Muslims under the boulder of Western colonialist intervention. In the August 1947 partition of the Indian Subcontinent, which was ruled for centuries by Islam, it is the Western colonialists that ensured that the hands of the Hindus were strengthened, including over the Muslim majority region of Kashmir. In 1947, 1965, 1971 and 1999, during armed conflict with India, it was Western colonialist intervention that was the dagger thrust in the back of the Muslims, to rescue the Hindu State from humiliation as much as possible. And now Trump’s intervention is only so that the US allies in the Hindu ruling elite can again be rescued by the Western colonialists, strengthening their hands over the noble, long suffering Muslims of Kashmir.

O Muslims of Pakistan and their Armed Forces and Mujahideen in Particular!

Reject all calls for the international mediation by the hateful kuffar that will deprive the Muslims of their right, for indeed the people of kufr are one hand against the believers. Certainly Occupied Kashmir will be liberated as Azad (Liberated) Kashmir was before it, by men of Imaan, fire and steel, seeking victory and martyrdom, which multiplies their strength over the cowardly, demoralized Hindu armed forces. Demand that the mujahideen are given full support, including military support, nudging the Hindu State towards actual collapse and withdrawal from Kashmir. And demand the re-establishment of the Khilafah (Caliphate) on the Method of Prophethood which will ensure the liberation of Occupied Kashmir, through all the means that Allah (swt) has bestowed upon us as a trust, including the mobilization of our armed forces, whose strength is multiplied over the demoralized, cowardly Hindu forces by their burning desire for martyrdom. Allah (swt) said:

“O you who have believed, what is [the matter] with you that, when you are told to go forth in the cause of Allah, you cling heavily to the earth? Are you satisfied with the life of this world rather than the Hereafter? But what is the enjoyment of worldly life compared to the Hereafter except a [very] little” [Surah At-Taubah 9: 38].