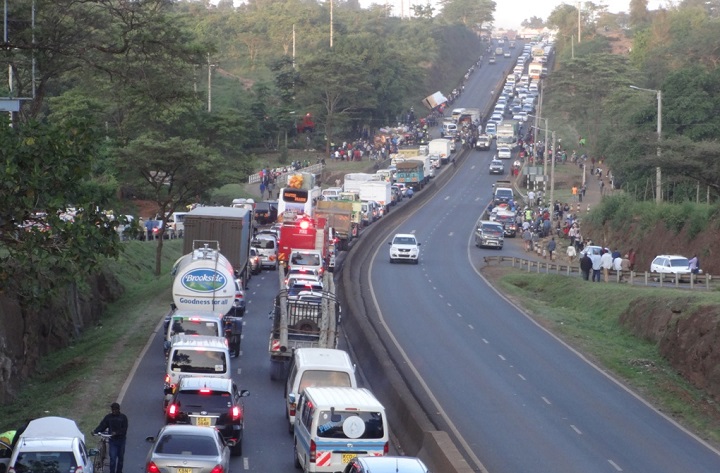 The Mombasa county Government has introduced new traffic rules in a bid to ‘eradicate’ traffic jams in the Port City of Mombasa. The new rules saw the barring of heavy commercial vehicles from accessing the Central Business District as well closing some major roads in a one-way direction. Some of the ways that have been affected include Jomo Kenyatta from Sabasaba Junction towards the CBD, Nyali and Ronald Ngala. The county authorities said this is the only way to decongest the city. We Hizb ut Tahrir / Kenya would like to expound the following:

The fact that many people homogeneously protest against the new move, is a clear indication that citizens are disgusted by the rhetoric and executive orders of their rulers due to their brazen dereliction of their duties and perpetually mesmerizing in corruption. The new traffic rules are contradictory among authorities with Kenya National Highway Authority insisting there was no proper consultation since some of the closed roads are under its management. And according to Kenya Gazette Notice issued last month, these new rules should be implemented temporarily which the traffic department in Mombasa maintains they are there to stay.

The new rules will not deal with this pandemic problem which for sure has cost capitalist regimes billions of dollar every year but have transferred a problem from one location to the other. In the early hours since its implementation already more traffic snarl ups in some routes have been witnessed! We are certain these new laws have been motivated by criteria of benefit for the few and not for the road users who enter the world for better social services like medication.

Since it’s a technical issue, there is a direr need for the involvement of rulers and professionals. In this matter, urban planning officials, traffic police officers and stakeholders. In consultative meetings which doesn’t include anybody. Unfortunately, the democratic leaders seem to be happy issuing executive orders without broad consultation. There was a need for prerequisite trials prior to embarking or launching these rules.

Solving a tiniest problem, is a bedlam in the Democratic Capitalist system. This is owing to the unequivocally inherit any shortcomings in the colonial system. The traffic snarl ups witnessed in major world cities are but an outcome of the abundant flaws in the Capitalist system, which has turned towns and cities into automobiles showrooms. As a result of agglomeration of essential services vital opportunities into major towns and cities, leaving the rural and environs dearth of them. Consequently, triggering an exodus of rural urban migration, thus inundating towns and cities with cars as well as people.

The individualistic nature of the capitalist system making each and every one wanting to own a car and a style of driving which shows little respect for other road users, faulty information on traffic conditions, and unsuitable management by the responsible authorities. Additionally, poor road design and maintenance in the cities as many roads are narrowly constructed. The belittling of some professions in the Capitalist system like farming makes most people avoid farming and push to move to cities for white-collar jobs, alluding that farming is not economically viable thus leading from rural to urban migration.

Islam under the Khilafah (Caliphate) will solve traffic jams by formulating strong and better traffic rules that will not put citizens in a total mess. With its profound economic system these are some measures to eradicate traffic jams: implementing its economic system laying down these strategies:

– The working policies of the Khilafah government will be 8hrs in a 24hr working conditions if adopted by the ruling authorities. This will enable only few people being on the road at different times of the same day.

– Citizens of the Khilafah will be helped to acquire land and be provided with seeds and fertilizers in order to venture into farming and other handy works that can be found in the rural areas.

We finally affirm the only system that will eradicate this menace is the Khilafah government whose main aim will be to take care of the affairs of its people and not benefit as the capitalist system do.