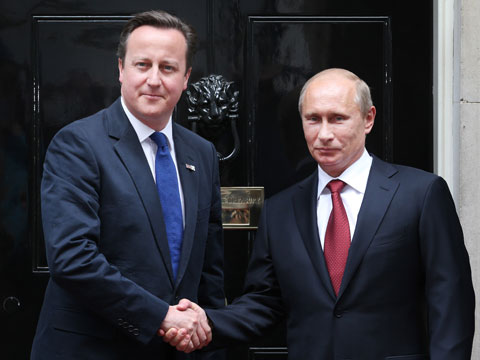 After the brutal killings that took place in France, the British government has stepped up its efforts for more military action in Syria and on its crackdown on the ill-defined enemy of ‘extremism’. It has created an atmosphere where major media outlets can fuel negative opinion against Muslims – like Channel 4’s program on “ISIS: The British Women Supporters Unveiled” and the Sun’s “1 in 5 Brit Muslims’ sympathy for Jihadis”.

Where is it leading?

Whether through military action – via drone or manned aircraft – or draconian domestic laws to silence Muslims – the British government’s policies are aimed, generally, to suppress the awakening of the global Ummah and, specifically, to counter the desire of the Muslims in the UK to connect to the global Ummah and to see her define her own political destiny.

ISIS aren’t a real Khilafah or Islamic State but used as an excuse to produce more obstacles against the emergence of a real Khilafah or Islamic State upon the methodology of the Prophethood, which would unite all the people of the region – Muslim or non-Muslim – under the justice of Islam. ISIS is used as an excuse to bomb the region, to curb the legitimate struggle against Bashar Assad until the US-led coalition can band together an alternative regime in Damascus that is acceptable to them. And it is the excuse to introduce unprecedented legal restrictions on Islam and Muslims within the UK.

This is not governance – it is intimidation

These government policies are not about preventing violence but about preventing Islamic belief and values. They propagate the lie that the more Islamic you are, the closer you are to Allah سبحانه وتعالى by practicing your Deen, the greater the threat you pose. So every Islamic practice is questioned and measures are rolled out thick and fast against the community. They have targeted everyone from children at nurseries to those working in public service jobs like teachers and doctors. They have made Imams too afraid to discuss the important issues of Islam for fear of being labeled ‘extremist’. And now once again they have attacked madrassahs and masajid.

The increasing bullying tactics of the UK government towards a minority community is not a measure of its strength. Rather it is a measure of its failure to force the Muslim community to love British foreign policy more than the global Ummah. It is a failure to convince them to abandon their Islamic values in favour of assimilation. It is a failure in their own standard of being a pluralistic and a tolerant society – compromising the very values they market to the world. They have even failed to have an honest debate about the “superiority of secular liberal values”, which can neither be defined, nor defended.

In truth, the behaviour of the British government towards Muslim citizens does not differ in principle with that of Putin towards the Muslims in Russia.

This is not liberation – but forced conversion

Britain, America and their allies tried to force ‘freedom and democracy’ on Iraq and Afghanistan and failed – and are now heading for failure in Syria. Syria has been embroiled in a bloody conflict for nearly five years. More than 250,000 Syrians have been killed, and 11 million made homeless after challenging a secular tyrant. Abandoned by the ‘international community’ (who continued to support Assad even when he had killed tens of thousands) the people sought refuge in Allah and vowed to replace the regime with one founded on their Islamic values. Now the same ‘international community’ openly stands by Assad, or (as they put it) by ‘elements of his regime’.

These policies are to bully the Muslim community in Britain into submission; and bomb the Muslims of Syria into a compromise.

They are to silence Muslims through ‘Prevent’ and counter-‘extremism’ policies, which are not about preventing ‘terrorism’ but preventing Islam.

They have cynically exploited the murders in Paris, along with the media commentary that effortlessly links beards and women’s dress to terrorism – to engineer a so-called ‘reformation’ to deform and twist Islam – or to make us abandon Islam.

Our message is very clear –

We will not abandon our Islam! Because you cannot abandon that which your heart and mind is convinced of.

We cannot change our Islam! Because this Islam was revealed by Allah سبحانه وتعالى to His Messenger ﷺ and has been transmitted authentically to us.

Our role as Muslims:

As well as exposing these hostile political agendas and upholding the Islamic values that some are trying to ban and suppress, Muslims must find a positive role in all the darkness.

It cannot be enough that we just look to defend our beliefs and values, without remembering that we have something positive to give.

It cannot be enough that we just look at the UK, without realizing that what is happening here is part of a global game. If we abandon what’s happening in Syria today, it will be abandoning Palestine, Kashmir, Burma and Afghanistan tomorrow.

It cannot be that we only focus on protecting a narrow part of Islam, when the agenda is about changing Islam to fit with a capitalist, secular and liberal agenda; to force a reformation to make a personal, spiritual, apolitical, quiet, subjugated, liberal, British-first, non-international Islam.

Allah سبحانه وتعالى sent His Messenger ﷺ with the Deen of Islam, a perfected way of life, for humanity – to lift people from darkness into light.

Within Britain there are Muslims and non-Muslims who wonder whether today’s world – with endless wars for resources; dominated by a few rich people exploiting others; driven by an excessive desire for wealth, regardless of who and what is damaged; where people live as individuals – atomized and apart from each other; and where racism still thrives – is the best there is on offer for humanity.

And we, the Muslim community, can give them hope there is something more: a way of life built upon reason and intellect; a way of life that does not permit wars for resources, racism or economic exploitation; a way of life that encourages people to live as families, neighbors and communities; a way of life which believes people are accountable in the Akhira for their actions in this Dunya; where no one – not even the Khaleefah himself – is above Allah’s Law. This is the Islamic way of life – and this is incomplete without the Khilafah upon the method of the Prophethood to implement so many of Islam’s solutions to human problems. Allah سبحانه وتعالى says:

“This day, I have perfected your deen for you, and completed My blessing upon you, and I am please with Islam as a deen for you.”